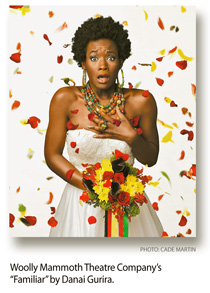 Before the #MeToo and Time’s Up movements, there was D.C.’s Women’s Voices Theater Festival, a forward-thinking month-long celebration that gave female-penned plays their proper due. The festival that premiered in 2015 returns this January and February with an even stronger conviction to equal the playing field on stage, where plays written by women playwrights make up a mere 22 percent of new productions.

“Theater is a male-dominated profession where the leadership is heavily gender unbalanced,” Nan Barnett, the festival’s coordinating producer, told The Washington Diplomat. “When examining theater companies’ seasons around the country, you ask, ‘Why are they producing one female or African American history play while the rest are typically written by white men? How do we get women’s scripts into the pipeline?’”

The response was to gather as many theaters in the area as possible to produce full productions of new plays written by women and invite Washingtonians to view them, Barnett said. The hope is that from there, these plays will have subsequent lives, either in New York or on regional stages. With the area’s top theaters involved in the effort — including Arena Stage, Ford’s Theatre, Shakespeare Theatre Company, Studio, Signature, Round House and Woolly Mammoth — the festival is also a showcase of top local talent in the nation’s capital.

While in 2015, the festival showed 50 plays, this year the organizers have scaled the number back to 25, to offer full-length productions for every play, Barnett said. The plays include world premieres as well as second- and third-time productions.

“Audience members at the festival will have the unique opportunity of helping to create a rise in the women’s careers,” she said.

For example, Polish playwright Martyna Majok’s world premiere of “Ironbound” at the first Women’s Voices Festival has since gone into production in New York and her career has taken off, Barnett said. 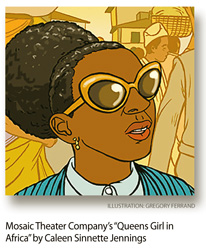 Many deal with the struggles of individuals with different cultural identities.

“‘Familiar’ deals with merging identities in a world where cultures blend,” said director Adam Immerwahr. “It tells the story about a wave of first- and second-generation immigrants from Zimbabwe to America in a funny, delightful and deeply moving way. It’s about what one must do to become an American, and at what costs?”

The play is somewhat autobiographical, in that playwright Gurira was born in America to Zimbabwean parents, was raised in Zimbabwe and then came back to America for college. She’s since gone on to a successful acting career, including roles in AMC’s “The Walking Dead” and the upcoming Marvel films “Black Panther” and “Avengers: Infinity War.”

Buffini’s “Handbagged” is about the relationship between the Queen of England and then-Prime Minister Margaret Thatcher, imagining what the world’s most powerful women talked about behind closed palace doors, said director Indhu Rubasingham. Rubasingham is also the artistic director of Tricycle Theatre in London. She commissioned the play in 2012, produced it in 2013 and then it transferred to the West End and toured nationally.

“Both the queen and Thatcher were from the same generation and both are powerful women,” she said. “It’s about what could have been and what might have been regarding their relationship. They met every week at the palace in real life and the play surmises what these meetings were like, given that theirs wasn’t an easy relationship. The play follows the time Thatcher gets into power until she leaves.” 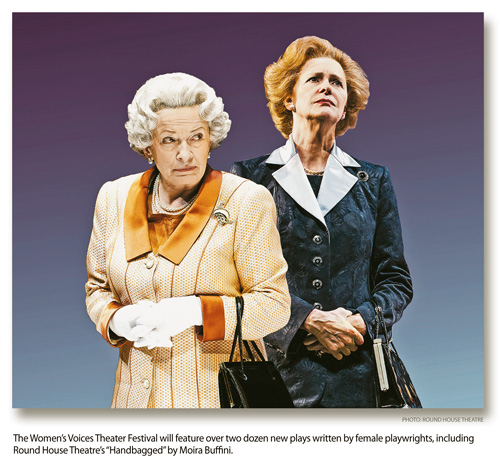 Jennings’s “Queens Girl in Africa” premiered what is now the play’s first act at Theater J as part of the 2015 festival, the playwright said.

“It’s semi-autobiographical; about my growing up in a black neighborhood in Queens, then being put in a Jewish school in Greenwich Village, and then moving to Nigeria where my parents got jobs,” Jennings said. “Then I came back to the States for college.”

“At that time in the ’60s, a lot of blacks turned to Africa to get away from the racism in the U.S., but at the same time African countries were experiencing civil strife in getting their independence. The play is about what the main character learns about herself [going from one culture to the next],” she said.

“The overarching message in this script explores how we are torn between living as an individual and as part of a community. It’s about being a woman, modern marriages, motherhood, refugee crises and assimilation,” Raffo said.

“The play follows the story of a young woman architect from Iraq who comes to America as a refugee from Mosul, where she has lost everything. She comes to America — a rugged individualistic, capitalist culture, while still carrying her Middle Eastern culture and social structure. She struggles to take steps on her own behalf and on behalf of her family and community.”

The Women’s Voices Theater Festival, in partnership with National New Play Network and New Play Exchange, also announced the creation of International Women’s Voices Day. The event on Jan. 21 coincided with the anniversary of the revolutionary 2017 Women’s March in D.C. and around the world in response to President’s Trump’s election. As part of that day, the organizations encouraged theaters around the world to host free readings of unproduced plays by women.