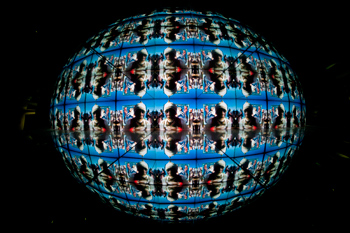 Among the video works that explore the notion of time at the National Museum of African Art isTheo Eshetu’s “Brave New World I.”

Time loops, layers and jumps in a new video and film-based exhibition at the National Museum of African Art, mesmerizing viewers with beautiful and challenging contemporary works from six critically acclaimed African artists.

“Senses of Time: Video and Film-based Works of Africa” strikes a powerful chord for viewers, offering seven vivid, singular experiences that each command attention. The videos on display by contemporary artists Sammy Baloji, Moataz Nasr, Berni Searle, Sue Williamson, Theo Eshetu and Yinka Shonibare feature dramatically different landscapes and subjects, while still exploring the common theme of how time is experienced, and produced, by the body.

“The artists are very specifically manipulating time, working with the substance of time as a creative medium to make points about race and personal identity, family and memory, politics and history itself,” curator Karen Milbourne told The Washington Diplomat.

The show, co-organized with the Los Angeles County Museum of Art, was spurred by Milbourne’s interest in the theme of time and the relationship to African art, as well as the idea of time-based media itself. The term comes from the art conservation realm, where people are “used to working with pieces where the image stays still,” she said. 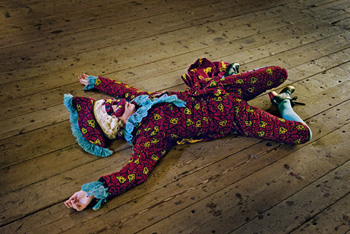 Time-based media contests those traditional notions of art, as viewers will experience for themselves in the videos on display. Duration serves as a dimension for these works, just as height or width would for a conventional painting.

“Too often, time is considered as a byproduct of the medium rather than one of the strategies,” Milbourne noted. “Each of the pieces really deals with time as it is experienced by bodies, how we dance and dissolve. Each one is focused on human beings and the experience of time. And if you think about it, you can just stand and hold your pulse and look at the ticking of the clock and see our bodies are moving at a different beat than the tick of a clock.”

She added: “It’s about how we slow and speed and loop and repeat time for different experiences or purposes.”

These pieces also put politics at the forefront. London-born Nigerian artist Shonibare’s video “Un Ballo in Maschera,” for instance, films European dancers wearing African-print ball gowns in a metaphor for the Iraq War and the absurdity of political violence.

“Do we really want to keep having history repeat itself?” Milbourne said. “He’s looking at how we repeat patterns of behavior in a sumptuous, gorgeous manner, but that is the motivation behind it.” 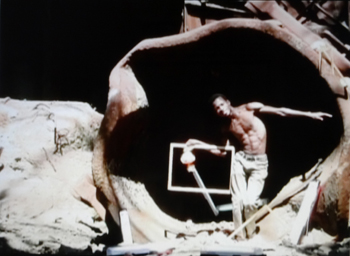 Baloji’s video also explores politics through choreography in “Mémoire,” as the artist — from Lubumbashi, the capital of the Democratic Republic of the Congo’s once-wealthy Copperbelt region — weaves the voices of the country’s politicians together with evocative images of a man dancing through the ruins of a deindustrialized landscape.

“This exhibition represents the diversity of African experiences,” the curator said. “These are artworks that are intended to help us think about the choices we make within our nations and for other nations, to get us to think about them in different ways — to feel it in our stomachs, see the patterns that repeat.”

South Africa’s Searle has two pieces in the exhibition, “About to Forget” and “A Matter of Time,” that look at memory, history and family. The stunner is “About to Forget,” in which viewers face three giant white frames that quickly fill with red silhouettes. It’s a hypnotic piece, accompanied by the sounds of water and bugs, that envelops the viewer as the red color swirls off the crepe paper figures and out of the frame. Water drips and engulfs the images — and then it all begins again.

In “There’s Something I Must Tell You,” English-born, South African-raised Williamson delivers the most traditional, documentary-style piece in the exhibition: a multimedia art installation recording six women who fought against apartheid in South Africa speaking with their born-free generation of granddaughters. Images of the women, past and present, draw in viewers as they appear alongside the powerful filmed conversations, inviting viewers to consider the gaps in experience, generations and political history that both divide and unite these South African women. It’s a gorgeous, thought-provoking piece that is worth watching for the full 36-minute runtime.

Sue Williamson’s “There’s Something I
Must Tell You”

Meanwhile, Nasr, an Egyptian artist, directly engages with the Arab Spring in his piece “The Water,” a commentary on former President Hosni Mubarak and the tensions leading up to the demonstrations and his downfall. And Eshetu’s “Brave New World I” is likely to be one of Washington’s most Instagrammed pieces this summer, a mirror box where both the viewer and the films are reflected, showcasing what Milbourne describes as the “difference of ritual time and the pursuit of timelessness and technological time.”

Milbourne said her “motivational point” with much of the exhibition was the idea that “with Africa, time becomes particularly significant because for too long, Africans haven’t been seen as co-equal with the rest of the world.”

“Historical specificity is not often attached or associated in the African context,” she said. “Too often we don’t associate cutting-edge tech with African artists, but we’re showing the innovation coming from this continent for decades.”

Senses of Time: Video and Film-Based Works of Africa