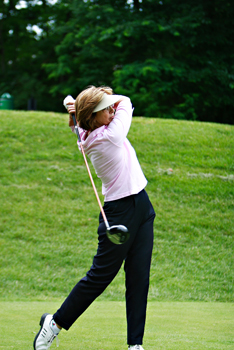 She is an Italian who was born in Sweden, adores Morocco, and loves to play golf wherever she is. Maria Felice Cittadini Cesi, mother of three and grandmother of three, is the very international wife of Moroccan Ambassador Aziz Mekouar. She speaks four languages fluently and loves to travel, especially to see her children and good friends.

“On my last trip abroad, I took 10 planes,” Maria Felice recalled. “First, I went directly to Marrakech [Morocco], then to Lausanne [Switzerland] to see my son, Rome [Italy] to visit my daughter, and Nice [France] to check on my 86-year-old aunt Yvi Larsen, a famous jeweler of the ’60s and ’70s who I adore and who’s been like a mother to me. Coming back, I always fly here directly from Morocco.”

It is obvious that her worldly upbringing has given Maria Felice a unique perspective on culture and relating to different people.

An avid golfer, Maria Felice Cittadini Cesi, wife of the Moroccan ambassador, tees off at the third annual Embassy Golf Tournament hosted by The Washington Diplomat in 2007.

“I can never thank my parents enough for my good education and the experience of living in so many countries as a child…. That’s where I really learned to be open, easy with people. I don’t even see the ethnic color of people. To me, everyone is the same all over the world,” she said, noting, “It doesn’t matter that my husband is Muslim and that I was brought up as a Catholic.”

Maria Felice (her close friends call her Felice) was the first child born to Marquis Gian Gaspare Cittadini Cesi — a former ambassador for Italy who hails from the medieval town of Acquasparta in central Italy — and Renata Tutino, who later remarried another ambassador, Marquis Carlo di Mottola. According to Maria Felice, her upbringing was “protected and stylish,” with an English nanny and very good schools. “Daughters were kept very close then and it was not in the tradition to send your daughter away to boarding school.”

Her parents, members of Europe’s high society, always entertained and little Maria Felice and her younger brother Mariano often met very important people who were guests of their parents. Sometimes, the results were unpredictable.

Her father became secretary-general of what would later be known as the Organization for Economic Cooperation and Development. Once, when the family was staying at the organization’s official residence in Paris, Cardinal Angelo Roncalli — a popular papal nuncio who would later become Pope John XXIII — came to visit. “I remember that my father carefully instructed Mariano to kiss the cardinal’s ring. My brother got confused and kissed the hand of every man in the room, just to make sure he got the right one. Everyone laughed.”

Maria Felice’s husband, Ambassador Aziz Mekouar, has a similar background. Born in Fez, Morocco, as the son of a diplomat, he also had the opportunity to travel and study abroad. He went to a French high school in Lisbon but speaks perfect Portuguese, which was very helpful when he served as Morocco’s ambassador to Angola and Portugal. Aziz began his Foreign Service career serving as Morocco’s deputy chief of mission to Italy and 14 years later, came back as ambassador. Before being posted to Washington more than seven years ago, he was the independent chairman for the Council of the U.N. Food and Agriculture Organization.

Though they share similar family backgrounds, when it comes to Washington’s demanding social scene, this husband and wife are worlds apart. 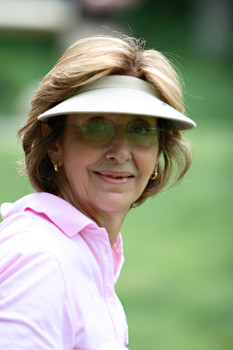 “I don’t especially like being on the social scene just to be there. I don’t like that kind of attention,” Maria Felice said. “What I love most is to host people here at the residence and treat them to great Moroccan food. So it’s not unusual to see Aziz at diplomatic functions without me. He loves to move around and see everyone. It is his work to be accessible, visible and show that Morocco cares. But when he comes home and gives me an oral report about how wonderful something was, I get very annoyed that I didn’t go.”

When she does show up, she is always noticed. Maria Felice is known for her fashionable mélange of colorful clothing from all over the world. “I shop in my own closet. I don’t buy much because I have clothes from wherever I have lived and traveled. I love to mix together a jacket from one outfit, pants or a skirt from another, and a different scarf and belt and jewelry that I have never worn together before,” she explained. “Mainly in Italy, I look for shoes and bags, and in Morocco, I buy silk and have my caftans made. I only shop in Paris and Rome during annual sales. Here, I buy mostly little things and sportswear because otherwise … the beautiful things in America are very expensive.”

But this stylish woman isn’t afraid to get her hair tousled. She has been athletic all of her life, fox hunting, skiing and swimming, but here in the United States, this diplomatic wife can be found most often on the golf course.

“In fact, golf introduced Maria Felice — a 10-handicapper who started playing the sport in Belgium when she was 18 — to her husband.

“In Rome, I play at the Acqua Santa di Roma, Italy’s oldest course. Back in the early ’80s, I usually played nine holes in the afternoons. One afternoon, I showed up and said, ‘I have one and a half hours to play. Is there anyone who needs a partner?’ They told me there is a couple with a diplomat just ready to start, so I joined them,” Maria Felice recalled. “When Aziz introduced himself, I thought he said McGuire, not Mekouar. I thought he must be Scottish. After a few minutes, I realized I was wrong.”

They started dating and married three years later with a civil and religious ceremony in Italy, and two months later held a ceremony and tented party for close to 1,000 guests in Morocco.

To make sure she is always prepared for a game, Maria Felice has three sets of golf clubs: one here, one in Italy, and one in Morocco. She is also a member of golf courses from Chevy Chase to Marrakech.

After six years without lessons here because she “was foolish by being so faithful to my Italian pro,” she now takes lessons from Joy Bonhurst, a former Chevy Chase Club pro and the 2009 Women’s Player of the Year on the Middle Atlantic Professional Golf Association. Maria Felice credits the instructor for making all the difference in her game. “I hit longer than when I was 20,” she noted.

Maria Felice also loves playing in Italy because there are weekly tournaments open to both men and women. Just one quick look in her china cabinet at her various trophies and you can see she’s often a champion at those matches.

In addition, she loves to read fine literature and history and is fascinated by paleontology and astronomy. “I was an avid reader when I was very young and had these reading contests with my brother to see who could finish a book first; no cheating allowed.”

Today, Maria Felice is researching and writing about her parents’ ancestry. “My father’s family is a historical Italian family whom many people already know. But my mother’s family is a family of fascinating intellectuals: painters, musicians and journalists,” she explained. “One cousin, Marco Tutino, a composer, is president of Bologna’s Teatro Comunale and has been voted chairman of all the opera presidents of Italy. Another, Saverio Tutino, was director of Corriere della Sera, Italy’s greatest newspaper, a real opinion-maker. 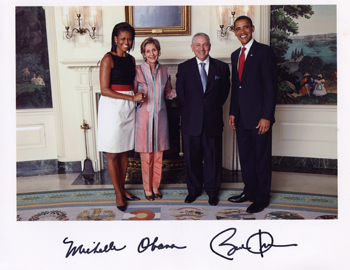 “Like many Italians, I was raised with classical music,” she continued. “I am designing a classical music awareness program for Moroccans. I’m also helping to promote a young Moroccan piano virtuoso, Marouan Benabdallah. He is extremely talented and deserves to be discovered by his fellow Moroccans and by international music lovers and critics alike. Marouan could become a bridge between two worlds, different as they may be but complementary, because after all, music is our universal language and, as he says, ‘If music is beautiful, everyone can understand it.’”

It’s clear that Maria Felice relishes the culture and personality of each country in which she has been lucky enough to live.

“It’s a great experience to see another way of life. Here, everything is so well organized — even golf tournaments — and there is never a question that doesn’t have an answer,” she mused. “In Italy, there is lightness to life, everything is amusing. Italians have an incredible sense of humor. But Morocco is life at its maximum. I love the country, the food and the people.”

Her Moroccan husband appreciates his wife’s love for his homeland. “Felice is a lady. Witty, very intelligent and well read, dedicated for the right things, with a great sense of home decoration,” he said, joking, “She has been a wonderful, impatient companion for the last 26 years.” When asked if he really meant “impatient,” he laughed and said, “That’s exactly what I meant.”

The Mekouars have one child together. Their 21-year-old son Camil, currently a senior at Duke University studying civil engineering, was born in Luanda, Angola, and is quarto-lingual like his parents and — according to his proud mother — good at the piano.

Her two children from a previous marriage are 37-year-old Liviana Jatta, a mother and speech therapist, and her 39-year-old son Giovanni Jatta, who has a Mexican wife and two children.

Although Maria Felice is more inclined to lead a private life, she was extremely active in the Mosaic Foundation — made up of the spouses of Arab ambassadors in Washington — for more than a decade before the local charity abruptly closed its doors last fall.

Started in 1997 with 17 wives of Arab envoys, the Mosaic Foundation raised more than million to improve the lives of Arab women and children and to increase awareness among Americans of the Arab world. The original inspiration for Mosaic came from Princess Haifa of Saudi Arabia, wife of longtime Saudi Ambassador Prince Bandar.

Maria Felice, a former Mosaic gala chair and the organization’s last president, cherishes her Mosaic experience. “I enjoyed working with Mosaic a lot and especially with Princess Haifa, who is a great lady and a very human and generous person. I learned a lot about fundraising and wish this kind of charity work would be adopted all over the world,” she said, concluding, “But all good things have to come to an end.”