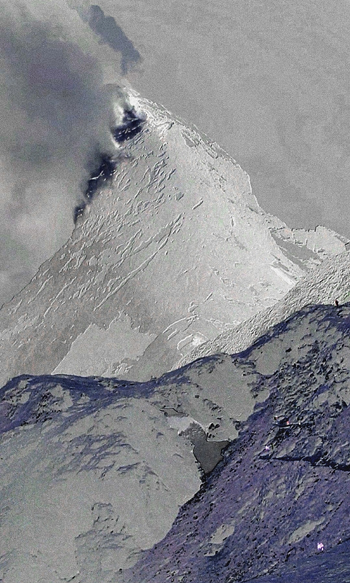 Now in its 11th year, “gute aussichten: new german photography 2014/2015,” an annual exhibition at the Goethe-Institut featuring the winners of Germany’s top photography competition, seems as fresh and forward-looking as ever.

A jury of seven chose eight award winners out of 115 applications from 40 different institutions. While each young talent is vastly different from the other, all of the photographers, according to the Goethe-Institut, are chasing “the most basic and existential questions of life: the banality of death and that which remains — or that, following the deceased, vanishes without a trace.”

Other themes the photographers explore include people’s roots and traditions, their assimilation into affluent Western society, the mundane nature of daily routines and the role, or job, of photography itself to study art and create a particular image.

In tackling dark issues such as death, desperation, discrimination and isolation, the photographers embody a refreshing attitude and curiosity about life — their works at once groundbreaking and unique to Germany and a generation of new artists, while at the same universally resonant. Looking at some of the diverse images — ranging from a Ghanaian man dressed in traditional garb to brightly colored doors and staircases drenched in sunlight — you’re reminded of the old admonition by famed photographer Walker Evans, who told artists to go out and see the world with a “hungry eye.”

The “gute aussichten” photographers are indeed hungry — for content, for meaning, for traces, hints, nuances and echoes in the life, and death, around them. They’re hungry for answers, or at least asking questions that force us to contemplate our lives. They’re not as interested in achieving the perfect, beautiful picture. Beauty, in fact, is not much of a factor in these works. The content is not about shadows and light, or capturing a telling moment that elicits clarity and understanding. The approach is more literary than that.

The results are often startling, some of them visual essays in the art of questioning. The questions are the same that painters, writers, poets and novelists have always asked: What is truth, what is happening in people’s lives, what is the sum of one person’s life, what is the meaning of death, what kind of physical world do we occupy, how does the past influence the present?

Two of the projects — “Traces” by Kolja Warnecke and Marvin Hüttermann’s “It Has Not Been”— are disturbing, moving and uneasy efforts that try to identify, each in their own way, the contours of a life. Warnecke established a relationship with his subject, a middle-age woman he had met at a social club who agreed to have him photograph her during the course of her daily life. The tightly framed shots are revealing in what they do not reveal: We see her face but have no idea what’s going on inside her head. The portraits have a haunting, in-your-face reality, as if something secret is being bluntly shared about how strangers lead their lives. 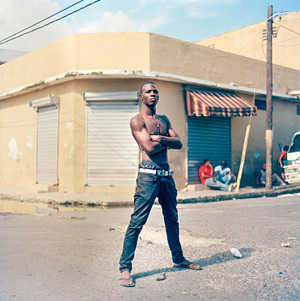 Hüttermann’s interests lie elsewhere but take on the same questions in harsh, almost brutal photographs that depict, among other things, a woman’s body in a morgue, a coffin and a body being burned. He also examines what’s left behind — in books, rooms, the details of domesticity — in images that seem to almost immediately begin to age, gather dust, lose their importance and become unhooked from daily use.

Meanwhile, Karolin Back offers huge installations of familiar imagery around the “the mountain of mountains” the Matterhorn in Europe, then unsettles her audience with unfamiliar motion and imagery.

There are other startling contrasts, such as Eduard Zent’s majestic, almost regal portraits that tie his subjects to the past and present — a young African man, handsome as a prince, with glaringly colored running shoes, for example, or a modern, ethereal Madonna testing the tea in her teabag, hinting perhaps that were are all connected to royalty in our own way.

Compare this to Jannis Schulze’s “Quisqueya,” a rambling, vivid, energetic group of pictures of the people who live on the island shared by Haiti and the Dominican Republic. There is a rough beauty in these images that resemble the in-the-moment immediacy of Polaroids. 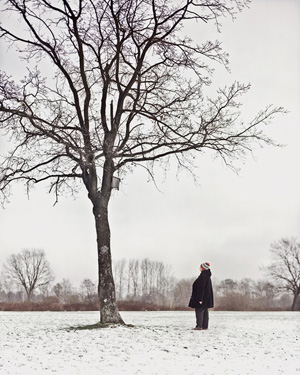 These photographers carry their cameras like antennae, measures of alertness gauging the world around them. There is even a video about the processes of photographing — events, occasions, memory making and how it’s done and not done. The video by Stefanie Schroeder is an objective commentary on photography’s usefulness, not as art but as occupation.

But perhaps the most moving piece in the show is Katharina Fricke’s “One Day in October. Or in November. Or in December,” a series of small photographs that fill a wall with the barely blowing wind of daily life. There are no faces, or people or movement in these pictures of what appears to be a suburban landscape that is so achingly familiar, no one bothers to notice it. Cars parked on curbs, sidewalks marked by cracks, rooftops, garages, winding streets, the façade of a house — Fricke captures the ordinary scenes that people pass by daily, oblivious and unaware of the simple, quiet beauty lurking underneath.

Even as you look at the work in the Goethe-Institut, the scenes across the street — a jazz saxophonist playing outside the Chinatown Metro station, the neighborhood’s ever-changing business signs and looming construction cranes — may have escaped your attention.

But these young photographers peel back the everyday imagery that often gets overlooked to ask deeper questions about life, death and everything in between.