Home The Washington Diplomat May 2015 African Artists Embark on Afterlife in ‘Heaven, Purgatory, and Hell’ 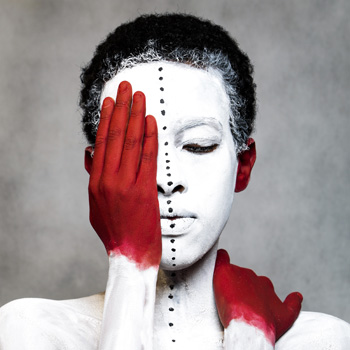 If you’ve visited the National Museum of African Art and been impressed, it’s time to go again and be transported.

The museum’s new exhibition “The Divine Comedy: Heaven, Purgatory, and Hell Revisited by Contemporary African Artists” is a sprawling but compelling collection of mixed media that transforms the dramatic, subterranean space into reflections on heaven, purgatory and hell.

Featuring works from over 40 African artists representing 18 countries as well as the African diaspora, the exhibition is inspired by Dante’s 1320 poem, a masterpiece of Italian literature. The art includes paintings, videos, sculptures, textiles, photography, prints and collages, some pieces specially commissioned for the exhibition. “The Divine Comedy” is the first African art showcase to encompass all four floors of the striking museum, which descends from its first floor off the National Mall to several subfloors below centered by a spiral staircase.

At a press preview, exhibition co-curator Simon Njami offered some rambling and opaque observations about his first exhibition for the museum before conceding he was not as much a “curator” as a “bandleader.” Regardless, the renowned art critic and his co-curator Karen Milbourne, a permanent curator at the museum, who led a concise and informative tour, have assembled a stellar and varied collection of artwork.

The exhibition also includes an interactive learning space that helps visitors better understand the works in the context of the museum itself. One of the most intriguing aspects of the display is its multidimensional theme. On the first level, viewers encounter the artists’ version of heaven.

A 42-foot canvas by Pélagie Gbaguidi is swirling and complex, while Egyptian photographer Youssef Nabil’s gorgeous, otherworldly, hand-colored silver gelatin prints of an empty, neon blue-hued beach earn their ambitious title: “I Will Go to Paradise.” Zoulikha Bouabdellah’s “Silence” adopts a more religious notion of heaven. The installation, consisting of a series of colorful prayer mats, each topped with a series of snazzy women’s high-heeled shoes pointing toward Mecca, is an intriguing commentary on the role of the fairer sex in contemporary Islam. 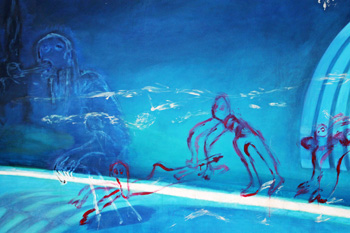 Pélagie Gbaguidi’s “Dansleventreduserpentdanhomê” is among the works inspired by Dante’s epic 14th-century poem in “The Divine Comedy: Heaven, Purgatory, and Hell Revisited by Contemporary African Artists.”

As we descend to purgatory, or the space one crosses on the way to somewhere else, for better or for worse, we encounter Benin-born artist Dimitri Fagbohoun’s “Refrigerium.” The complex mixed-media installation is a meditation on religion, the afterlife and the great unknowns. The piece is built around a wooden confessional box and incorporates a broom, book, screws, ceramic objects, electroluminescent paper, frame, inverter and audio/video. Fagbohoun explained during a press preview that the installation is the second part of an earlier project he called “Papa was a Rolling Stone?” about his missing father and things he would have liked to discuss — or “confess” — to him. The confessional box in “Refrigerium” features a cutout of a traditional-looking Jesus face, but his eyes are glowing, making for the most sinister-looking Messiah in recent art.

“I just felt 12 years of Catholic school coming back to me,” one viewer said with a chuckle as she walked away from the work.

As we descend toward a darkened “hell” on the museum’s bottom level, Aida Muluneh’s “The 99 Series” serves as another showstopper. Her series of seven photographs — chosen to represent the exhibition in the museum’s promotional materials — is dazzling. In one of the photos of an African American woman covered in white paint and black dots, a collection of red hands interrupts the photo and appears to be pushing and pulling her visage in different directions. Muluneh’s work, commissioned for the exhibition, wasn’t a stretch for her philosophically. 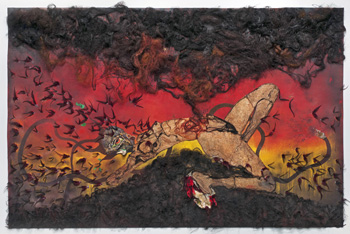 “I do believe we’re living in the inferno,” the Ethiopian artist declared at the press preview.

As we come to the end of hell — or the beginning, depending on which way the viewer enters the gallery — we encounter Jems Robert Koko Bi’s utterly fascinating but morbid sculpture installation “Royal Convoy” consisting of a rudimentary boat filled with wooden skulls. The disjointed heads lie eerily lifeless in the boat, ready to be transported to another dimension.

Much of the fun and inspiration in “The Divine Comedy” is seeing heaven, purgatory and hell through the very different interpretations of these talented artists. The thought-provoking, well-conceived and visually arresting exhibition compels us to consider our own understanding of these concepts either in the present or the afterlife, depending on your point of view. That’s the point of great art, right?