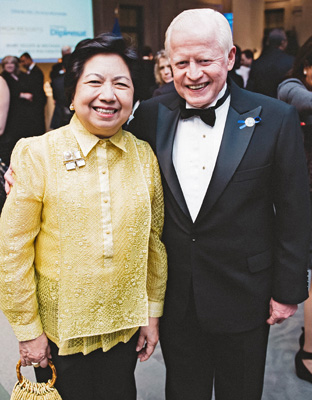 “I prefer to be active and use time management. I don’t have any children here so I have the time,” said this affable mother of five and grandmother of three.

Here in Washington, Vicky Cuisia is working primarily with three groups at the moment. The Filipino Youth Leadership Program (FYLPro), which she spearheaded, is designed “to reignite an interest in developments in the Philippines” by allowing young Filipino-Americans to apply for trips to meet key government and business leaders in the Philippines. She hopes the FYLPro alumni return to the United States ready to develop projects of joint interest to Filipinos and Americans. Cuisia also devotes her time to the ASEAN Women’s Circle, through which she showcases Filipino culture, art and values among the diplomatic corps and influential women in Washington.

Finally, the Bohol Restoration Group, which she established after a 7.2-magnitude earthquake struck the Philippines in 2013, is a mammoth project to restore the country’s ruined heritage sites.

Three weeks after that earthquake, the Southeast Asian island nation was struck by Typhoon Haiyan (called “Yolanda” in the Philippines), one of the strongest storms in recorded history. In the aftermath of that disaster, which killed over 6,300 people, Cuisia led the Philippine Humanitarian Coalition. Under its umbrella, the coalition brought together over 3,000 Filipino-American groups in the United States to organize a collective response to the rehabilitation efforts in the Philippines.

A year and a half later, Haiyan recovery efforts are still underway. To that end, Cuisia noted that the U.S.-Philippines Society is hosting a fashion show on June 11 at the Ronald Reagan Building and International Trade Center to aid in the recovery of fashion microenterprises. All of the clothes featured at the fashion show, which is being held the day before the country’s Independence Day, will be handmade with sustainable fabrics like pineapple and banana fiber. More than 600 people are expected for the fundraiser.

Meanwhile, back in Manila, Cuisia works with Philippine Business for Education (PBed), a USAID partnership that provides scholarship funding for 1,000 teachers around the country and serves as the voice of the business community on education reform. She also chairs a program that offers public high school teachers and students a variety of projects in art, culture, education, judiciary training and religious initiatives. While in Washington, she created similar joint initiatives with groups based here and low-income communities back home to promote Filipino art and education.

At home, Cuisia showcased Filipino art by convincing the country’s Central Bank, known as Banko Sentral ng Pilipinas, to release its pre-Hispanic gold collection, which she discovered in the bank’s vaults. This collection, which highlights a flourishing pre-colonial Filipino society, is now open to the public as part of a permanent exhibit in the Metropolitan Museum of Manila. Under the auspices of the Asia Society, the gold collection will be coming to Washington this September.

Cuisia’s nonprofit work spans the social spectrum. She’s been involved with the Laura Vicuna Foundation Inc., a nonprofit that helps street children, and the Franciscan Missionaries of Mary, a Roman Catholic women’s religious group, where she provided running water to poor parish churches.

Before her nonprofit projects, Cuisia, who holds a bachelor’s degree in business, worked for two different firms. For more than 30 years, she was president of Domel Realty Development Corp., where she focused on affordable high-rise living for middle-class Philippine families. She rehabilitated the company from bankruptcy through restructuring and repayment of all foreclosed mortgages.

For five years during that time, she also worked with the Insular Bank of Asia and America, where she developed corporate social responsibility projects that included housing initiatives for resettled slum dwellers and micro-financing loans for low-income families that boasted a 98 percent repayment ratio.

Like other diplomatic spouses, Cuisia is proud of the strides her emerging-market nation of nearly 100 million people has made. The Philippine archipelago, which consists of over 7,000 islands, is successfully transitioning into a services- and manufacturing-based economy that is one of the fastest-growing in Asia. It’s also home to a large multiethnic population and one of the largest diasporas in the world.

“The Spanish, Chinese, Dutch and Americans have all integrated into us,” Cuisia explained, “and 80 percent of us are Catholic, thanks to the Spanish settlement.”

“People are so friendly; smiling is their second nature,” she added. “We are giving and caring. Filipinos have a family orientation. We take things lightly and are very patient.”

When I asked her if her husband is patient, she gave me a wry smile. “No, he’s not; he’s of German descent,” she said, noting that many Filipinos, whose relatives came over during World War II, are of German descent.

“His grandfather was pure German and he married a Filipino woman,” Cuisia said of her husband’s family. “They had eight children: four were blond and light-skinned like my husband and four were not. More important than my husband’s skin color is his character. That’s what matters when you marry. When I embraced him, that was it.” 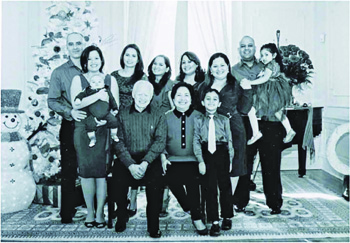 The couple met in Manhattan when he was a graduate student at the University of Pennsylvania’s Wharton School. “I lived in a small building with other Filipinos, a lot of whom were going to school. I was working at an accounting firm. We married two years later,” she recalled.

Two of their daughters now live in New York City. Jaymi is single and Anna is married and the mother of their youngest grandchild, Dylan, who is 18 months. Their other grandchildren are 4 and 7.

Cuisia and her husband are known around Washington for wearing traditional native dress. The ambassador often dons embroidered formal shirts known as “barong-tagalog,” while her “terno” dresses are renowned for their characteristic puffy sleeves and beautiful material. The one she was wearing during our interview was made out of pineapples; bananas are also used in the weaving.

The subject of Philippine fashion intrinsically brings to mind Imelda Marcos, widow of former Philippine President Ferdinand Marcos, who ruled the country from 1965 to 1986. Nicknamed the “Steel Butterfly,” she was infamous for her vast collection of 3,000 pairs of shoes and lavish spending.

“I have no politics in my blood,” Vicky Cuisia said, noting that Imelda Marcos, 84, is currently a congresswoman and that two of her children also hold political offices. “They want power; there is always the dynasty issue.”

Coups and corruption have marked Philippine politics since the country’s independence in 1946. More recently, the government has had to confront territorial disputes with China and a domestic Muslim insurgency in the south.

The current president, Benigno Simeon Aquino III, comes from a long line of politicians (his mother was famed “People Power” President Corazon Aquino), although unlike the Marcos dictatorship, Cuisia says Aquino has run a much more “transparent” government. “Our president serves for six years, so around Christmas this year he will leave.”

The ambassador — who previously served as governor of the Central Bank of the Philippines and chairman of its Monetary Board — was appointed to his post in Washington by Aquino four years ago. When not promoting the Philippines in the U.S., the couple visits home via their usual 22-hour route through Detroit and Tokyo.

When I asked Cuisia if she had any hobbies, she looked at me blankly. With all the nonprofit work that she does both here and in the Philippines, free time is not on the schedule.

“As far as doing something for pleasure, I like to help someone or something especially if it helps with the promotion of the Philippines. We are building a house outside [Manila] at home. We want to avoid the pollution and everything that gives us allergies. You should see how happy I am when I am there.”