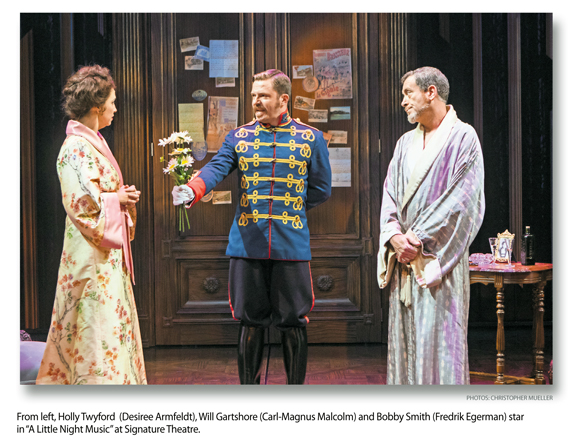 Perhaps it’s no wonder that the nucleus of Signature Theatre’s “A Little Night Music” is the one artist in the highly talented cast who doesn’t list singer at the top of her resume.

While the production showcases gooseflesh-inducing voices belting out Stephen Sondheim’s challenging score, Holly Twyford, a renowned local thespian, steals the show. This is not only because she plays the appealing female lead, Desiree Armfeldt — an aging actress who’s past her prime — but also because she miraculously dominates the musical with just her acting chops.

Granted, in the show’s performance history, it hasn’t always been paramount for the role of the witty and quirky Desiree to be a strong vocalist, even though the part has been played by crooners likes Catherine Zeta-Jones and Patti LuPone. However, director Eric Schaeffer’s calculated decision to cast Twyford in the part was a risk — for both him and the actress, as this is Twyford’s first musical despite appearing in a multitude of D.C. productions.

Luckily, but not surprisingly, Twyford turns what could be perceived as a shortcoming into her advantage. She stands out from the vocally blessed cast. The play is filled with fast and furious music and complicated harmonies. Twyford’s character slows the action down to its core message. This is especially true when Desiree, despondent over her disappointing love life, sings the iconic ballad “Send in the Clowns.”

“I thought that you’d want what I want, sorry dear,” she croons when the object of her affection rejects her. Here, Twyford’s lack of singing virtuosity arouses more empathy; the song’s lyrics that describe her helplessness feel more real when sung by a musical novice.

Schaeffer picked a crowd-pleaser when deciding to open Signature’s season with a well-known, well-loved play. 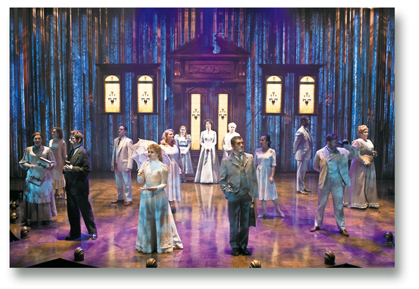 “A Little Night Music” — with music and lyrics by Sondheim and a plot inspired by the Hugh Wheeler book and by the Ingmar Bergman film “Smiles of a Summer Night” — debuted on Broadway in 1973. It has echoes of Shakespeare folly in that the plot centers around the mismatched romantic lives of several couples who (spoiler alert) find their appropriate better halves by play’s end. It also includes a quintet — a Greek chorus if you will — who communicate their amusing commentary through operatic interventions.

This chaotic soap opera of loves waxing and waning is set against the backdrop of Sweden at the turn of the 20th century, when upper-class, proper ladies and gents donned elaborate Victorian dress.

The script is a farce of sorts on the real-life trials and tribulations of love, nostalgia and regret. Schaeffer aptly describes “Night Music” as a “romance with cynicism, or as Sondheim called it, ‘whip cream with knives.’”

For those who have trouble following twisting plot lines, especially plots with similarly named characters, here is a cheat sheet: Desiree Armfeldt is having an affair with Count Carl-Magnus, who is married to his long-suffering wife, Countess Charlotte. Meanwhile, Desiree secretly longs for her long-ago love Fredrik Egerman, who is recently betrothed to an 18-year-old virgin, Anne.

Henrik, Frederik’s son, is studying for the ministry yet, ironically, lusting after Anne, who is his age-equivalent stepmother, in addition to consenting to frequent trysts with the maid, Petra.

Outside of the love triangles are Desiree’s teenage daughter, coincidentally named Fredrika, and her mother, Madame Armfeldt, who used to be a lady of the night, but who now is mostly confined to a wheelchair. Desiree has made Fredrika her mother’s charge while she tours the country trying to capitalize on her last 15 minutes of fame. 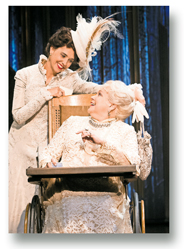 As one can imagine with this setup, the actors are individually droll and collectively a hoot. For example, Henrik, played by Sam Ludwig, who is too shy to go after the girl of his dreams, morosely sings his lovelorn woes to the audience while accompanying himself on the cello. Countess Charlotte, portrayed by Tracy Lynn Olivera, is openly aware of her husband’s adultery and delivers morose, sarcastic one-liners with the passion of a sluggish snail. Only during her duet “Every Day a Little Death” does she let on that she’s hurting from a loveless marriage.

Underneath the foolishness and absurdity of the relationships are endearing characters. One is the lovable, self-pitying Fredrik, given depth by the prowess of Bobby Smith. In his harmonizing duet with Twyford, “You Must Meet My Wife,” one of the most enjoyable numbers in the program, he showcases both his powerful voice and comedic timing.

Sondheim once said, “Art, in itself, is an attempt to bring order out of chaos.”

The characters in “A Little Night Music” — through their disorder — make sense of the chaos that consumes them by laughing at their own foolishness. When Desiree sings “Send in the Clowns,” she adds, “Don’t bother, they’re here.”

Perhaps Sondheim is saying we — as artists and spectators — are all fools, or chumps, vulnerable to love’s perils. Maybe so, but perhaps that isn’t necessarily bad after all.