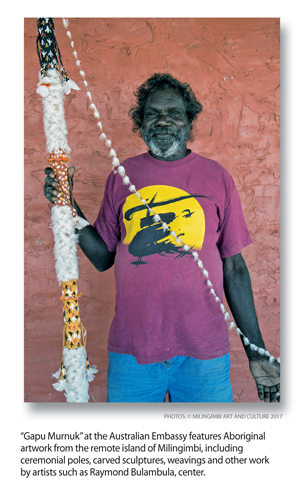 Australia, like many nations, has a tortured past with its indigenous people. Aboriginal Australians, considered the world’s oldest-known civilization, have a long and ugly history with colonization, one the government has in recent years tried to atone for, though scars remain.

In Washington, the country’s embassy has worked to showcase Aboriginal culture and indigenous art through a regular series of exhibitions, including an upcoming show this month that celebrates the creativity on a small island off the remote northern coast of Australia.

Aboriginal people have inhabited the island of Milingimbi for over 40,000 years. Milingimbi was formally established in 1923 by the Methodist Overseas Mission. It was bombed during World War II, forcing most of the island’s residents to flee. Milingimbi then became an air force base, but the missionaries returned in 1951, re-established the town and opened a school there. They respected the traditional culture, however, so Aboriginal customary religion and Christianity coexisted in the small community.

Milingimbi also soon became a central point for cross-cultural contact and research. Art is key in Milingimbi and it holds a high place in society.

Henry Skerritt, curator of the Kluge-Ruhe Aboriginal Art Collection at the University of Virginia, said the indigenous art on display at the Australian Embassy in “Gapu Murnuk” is an example of people both preserving their culture and sharing it with others. “These communities used art to keep them strong and also to show their art to the outside world,” he said. “Their two complementary functions make it so powerful.”

The contemporary works on display will include ceremonial poles known as larrakitj, paintings on bark and paper, fiber works and carvings by artists such as Raymond Bulambula, Joyce Naliyabu, George Dangi and others.

Bulambula and Naliyabu are indigenous art fellows at the University of Virginia. Skerritt said he is particularly excited about the residency, as most artists typically hail from urban centers, not barely inhabited, remote areas. The artists’ residency will culminate in the exhibition at the Australian Embassy.

Skerritt said technology has helped bridge the distance between Milingimbi’s artists and their counterparts in the Washington area, although he added that technology doesn’t erase the distinct cultural differences between them. “I often Skype with Raymond and Joyce,” he said. “Just because we are all connected, we haven’t lost what makes us unique.”

Chris Durkin, art manager of the Milingimbi Art and Culture Centre, said his organization has worked to help the island’s indigenous people, also known as the Yolngu, find new territory for their work. By the 1960s, the center was a leader in establishing a market for traditional Yolngu art, helping it find its way into significant national and international collections. Durkin said he’s been focused on preserving traditional mindji (designs) and object-making techniques. The works include weavings using pandanus, a type of tropical plant that is dyed black, as well as carved sculptures that represent spirits and hollow log coffins. At the same time, the center encourages the making of fresh new works.

“It’s a natural progression for us to exhibit recent artwork at the Australian Embassy in Washington to share the continuum of deep knowledge and artistic vision of the Milingimbi community with an international audience,” Durkin said. “The opportunity to present the work in a gallery setting while being present to speak to it is very important to us.”

Committed to bringing indigenous art to the U.S., Durkin said it is important that this type of art is viewed not through a purely anthropological lens. “The reality is that the Australian Aboriginal artists are undeniably the strongest and most relevant voices in the nation’s visual arts,” he said. “Each artwork stands on its own while also telling the story of its relationship to its neighbors and a whole network of knowledge that includes every inch of Australian land and sea.” 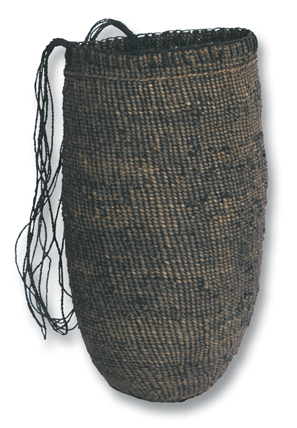 For example, the exhibition title, “Gapu Murnuk,” refers to the merging of elements, specifically freshwater and saltwater, bringing together an abundance of food on which the Yolngu depend. As the “gapu” (water) travels, the “gapu gamurray” (saltwater) and “gapu raping” (freshwater) meet to create something else, the “gapu murnuk.” The exhibit also references the metaphorical joining between different tribes, between husband and wife, and between parent and child.

Skerritt hopes those who visit the exhibit learn about the nuances and skill of Aboriginal art, and how beautiful and powerful it can be. “Don’t come with the assumption you’ll see primitive art,” he said. “These are incredible artists with a rich culture.”