Home More News A push for freedom: How to ensure democratic transition in Nicaragua 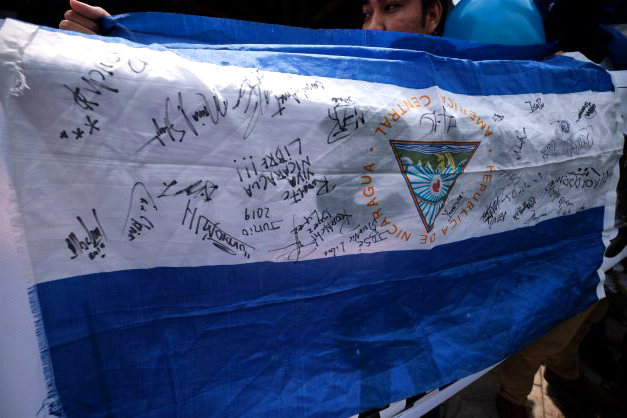 When Western Hemisphere heads of state gather in Los Angeles for next month’s Ninth Summit of the Americas, at least three presidents won’t be in attendance: Cuba’s Miguel Díaz-Canel, Venezuela’s Nicolás Maduro and Nicaragua’s Daniel Ortega.

Some other leaders, acting in solidarity, may boycott the June 6-10 meeting, whose theme is “Building a Sustainable, Resilient and Equitable Future.” Like all eight previous hemispheric summits since the first took place in Miami, in 1994, the meeting is being held under the auspices of the Washington-based Organization of American States (OAS).

It’s no irony that exactly one month ago, on April 24, heavily armed Nicaraguan soldiers forcibly closed the OAS office in Managua after the country’s foreign minister, Denis Moncada, said it would longer participate in this “diabolical instrument of evil called the OAS.”

Things are clearly getting worse for Nicaragua’s 6.8 million people under Ortega, a 76-year-old former guerrilla who has managed to remain in power since 2007. Last November, Ortega announced his country’s withdrawal from the OAS because it had condemned his re-election to an unprecedented fourth consecutive term.

Ortega first came to power upon his 1979 overthrow of the Somoza regime, remaining in office until his 1990 election loss to Violeta Chamorro. While in the opposition, he lost elections in 1996 and 2001, but won the Nicaragua’s 2006 general election, quickly allying himself with Cuba’s Fidel Castro and Venezuela’s Hugo Chávez. As time went on, Ortega became increasingly authoritarian, and some of his former Sandinista allies began comparing him to Somoza, the dictator he had overthrown.

“Today, a culture of fear prevails in Nicaragua. Daniel Ortega and Rosario Murillo [Ortega’s wife and vice president] rule with blanket impunity,” said Rebecca Bill Chavez, speaking at a May 9 online event to discuss the situation in Nicaragua. “Their use of force and disregard for commitments to the international community have led to increasing human rights violations, greater migration flows, and a deepening economic crisis.”

The Dialogue’s panel coincided with release of its report, “A Push for Freedom: Ensuring a Democratic Transition in Nicaragua Through International Pressure.” The 26-page study was written by Manuel Orozco, director of the think tank’s migration, remittances and development program.

The three main issues, Orozco said, are Ortega’s obsession with power, his use of impunity as a negotiating tool to strengthen the dictatorship, and the inability of international sanctions to address such abuses. The consequences, he said, are severe. Last year, 200,000 Nicaraguans left their country, and during the first four months of 2022, more than 70,000 have fled—50,000 of them to the United States.

In such a climate, he said, Ortega’s abuses can no longer be confronted by sanctions alone.

“You need to address harsher penalties and pressure from the international community in a country where political opposition is basically fragmented and dismantled,” said Orozco. “We can no longer wait until another prisoner dies.”

Among other things, Orozco urged greater enforcement of the RENACER Act, sponsored by Sen. Bob Menendez (D-NJ) and signed into law by President Biden last November.

The acronym RENACER (Spanish for “to be reborn”) pretty much sums up its objective: Reinforcing Nicaragua’s Adherence to Conditions for Electoral Reform. It grants the president power to exclude Nicaragua from the DR-CAFTA (Dominican Republic-Central America Free Trade Agreement) and to block multilateral loans to Nicaragua.

According to Orozco’s report, Nicaragua has broken its compliance with DR-CAFTA on several grounds. First, it has violated the labor side of the agreement regarding union rights among workers at the 193 businesses in Nicaragua’s free trade zones. Furthermore, it alleges that tax extortion has been used to raise revenues and to force businesses to keep a low
profile.

Today, the free zones employ nearly 126,000 workers, and with 50% of Nicaraguan exports going to the United States.

“Businesses from different segments of the Nicaraguan economy have reported being victims of such harassment and do not express political opinions out of fear of fiscal, financial, or personal retaliation,” says the report. “Such activity works against both national and US businesses, creating an inhospitable business and work environment, while benefitting the regime.”

Ullmer: Ortega has held on ‘through force, blackmail and terror’

Deborah Ullmer is regional director for Latin America and the Caribbean at the National Democratic Institute (NDI).

She said the “so-called elections” of Nov. 7, 2021, represented the culmination of the Ortega regime’s “decades‑long assault on independent voices, the perversion of the country’s democratic institutions, and the consolidation of the Ortega‑Murillo family dictatorship.”

According to Ullmer, Ortega ensured his re-election by jailing seven democratic opposition candidates, and has maintained his power through force, blackmail and terror.

“The chain of repression begins in the communities with the military, police, and paramilitary forces who monitor, harass, and persecute citizens they identify as opponents, and continues with a corrupt judiciary that fabricates evidence against its political opponents to justify prison time,” said Ullmer, who has lived and worked in Nicaragua.

In all, the regime holds more than 170 political prisoners, denying them access to due process, legal rights, and even basic needs. Besides expelling the OAS, it has also seized private universities. More than 140 NGOs have been shut down since 2019.

April 2018, she said, marked a dark turning point when widespread popular protests over social security reforms resulted in at least 325 deaths at the hands of police and paramilitary, according to numerous human rights reports.

“In NDI’s experience, corrupt political dynamics are precursors to fraudulent elections, and serve as catalysts for instability. According to different investigative reports, a wide range of Nicaraguan actors have illegally enriched themselves with the protection of this regime,” Ullmer said. “The rest of Central America points to Nicaragua as the worst‑case scenario for stability, yet, when looking at the votes of the OAS, both Guatemala and Honduras have stayed silent on Ortega’s actions.”