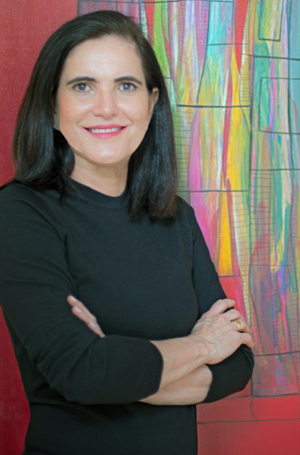 Marília Bulhões, a Brazilian transplant who lives in D.C., offers a contemporary take on Brazil’s people and landscape in “Brazil, My Brazil: Contrasts of Modernity” at the Art Museum of the Americas.

In the foyer of the Art Museum of the Americas F Street Gallery is a wide stairwell that leads down into another foyer, which in turn leads to a narrow corridor. Here, white panels that might otherwise be overlooked, or dismissed simply as components of a hallway, provide the background for a stunning display of 15 abstract paintings that reflect the at times clashing factors of Brazil’s evolving landscape.

Individually, each canvas is powerful and bold. As a collection, they are nearly an assault on the senses — vivid acrylics or oils on canvases reflecting the people and landscape of Bulhões’s homeland in all its guises.

Two paintings, named “Shantytown I” and “Shantytown II,” depict Brazil’s slums, commonly known as the favelas. One features grey blocks with pastels that imply an apartment building, dull, with moments of cheerfulness. The other, red and vivid, evokes violence or passion, or both. “I paint with my feelings,” Bulhões says, “with my heart, with my sentiments.”

Another piece, “Black Gold,” with its broad strokes of varying hues of blue, calls to mind a tropical paradise, brilliant and shimmering. “It’s like a dive into an endless ocean,” Bulhões said of the work. Yet another has twisting veins of jeweled tones so vivid it could be a scarf around a beautiful woman’s neck. Two nearly identical paintings, one verdant, one in moribund greys, depict the Amazon’s struggle.

It is Bulhões’s use of light that struck curator Roxana Martin. “Each piece seems to glow, even the darkest ones,” Martin said at the opening of the exhibit. “There is light here, in contrast, and in conflict.” 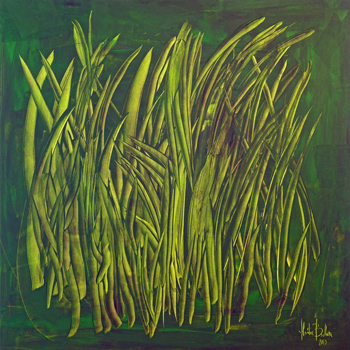 Those contrasts are inherent in Brazil, a rapidly developing country with stunning demographic and natural diversity that grapples with the pitfalls of progress, from poverty to environmental concerns. It is a complex tapestry that is weaved into Bulhões’s abstract, sometimes sparse canvases.

“Marília Bulhões’s works are so light they almost seem to float,” said Minister George Torquato Firmeza, director of the Cultural Department of Brazil’s External Relations Ministry. “They pose questions, insinuate, invite, play, remind and kiss Brazil. Brazil is not meant to be explained. It is to be bitten into, like a green and yellow guava.” 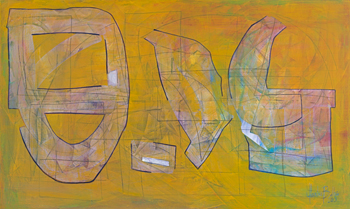 It is perhaps a testimony to the implied intimacy of the art that at the opening reception, strangers stopped other strangers to point to pieces they shouldn’t miss, and still others quickly began to speak like old friends. An older couple stopped a younger woman and told her, “See the ball of twine? It’s really good,” and proceeded to walk her down the corridor until the three stood in front of it. Another enthusiastic woman told a man standing next to her, “You must see the ocean.” Nether an employee of the gallery nor friend of the artist, she then handed him a postcard with information about the exhibit because, as she said, “It’s just so pretty.”

Born in Natal, the largest city of Rio Grande do Norte, a northeastern state in Brazil, Bulhões is primarily a self-taught artist who trained in Washington at the Corcoran College of Art + Design, among other places. Bulhões returned to D.C. in 2012 and says she is happy to be back. “I lived here before, for a short time,” she said. “Now I feel at home again.”

But on the walls at the Art Museum of the Americas hang the vestiges of a very different home. Some may view this exhibit as a political statement, others as a love letter. For the artist, however, the true meaning of the 15 canvases is something more simple, and profound.