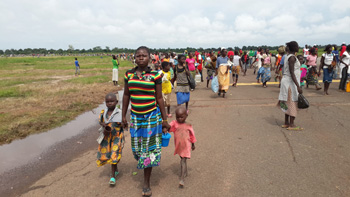 The Central African Republic (CAR) is a failed state, a black spot on the map in the heart of Africa that could destabilize an already volatile region. Western countries fear it could become another Somalia, but no one is ready to devote the resources needed to stabilize an impoverished, landlocked country of less than 5 million that has mostly been ignored by world powers since it gained independence from France in 1960.

Six months after a coalition of five disparate rebel groups called Séléka deposed President François Bozizé, who took power in a coup himself in 2003, the country is in yet another downward spiral, with a weak new leader, Michel Djotodia, who in September dissolved his Séléka coalition after admitting he had no control over them, a desperate humanitarian situation, and ongoing fighting between Séléka factions and groups loyal to Bozizé, who is now in Paris and reportedly still harbors dreams of returning to office.

Civilians flee Bangui earlier this year to escape violence after Séléka rebels entered the capital of the Central African Republic, deposing President François Bozizé. The country is in yet another downward spiral, with a weak new leader who recently dissolved his Séléka coalition after admitting he had no control over them, a desperate humanitarian situation, and ongoing fighting between Séléka factions and groups loyal to Bozizé.

Four of the last five transfers of power in the CAR have come via coups. Last December, Séléka, who are mostly Muslim fighters in a Christian majority country, signed a power-sharing agreement with Bozizé but took power by force in March after they felt he reneged on the deal. The rebels looted the country, even stealing mattresses from the country’s hospitals, terrorized the local population, and recruited child soldiers and prisoners to bolster their ranks, among other human rights abuses.

Sporadic fighting has forced Cameroon to beef up security at the border and despite a pledge from the African Union to mobilize a 3,600-troop peacekeeping force, there is no end in sight to the violence. The United Nations says that more than 200,000 Central Africans have been forced to flee their homes, while more than 1.6 million are in need of humanitarian assistance, including food, protection, health care, water, sanitation and shelter. U.N. representatives on a fact-finding mission in early September found villages burned to the ground, with their former residents hiding and foraging in the bush.

Sectarian strife is also a concern. The CAR has never had a Muslim leader (Jean-Bédel Bokassa once converted to Islam but converted back to Christianity within a matter of days) and there are fears that Christian-Muslim violence could be intensifying. In early September, in the northern town of Bouca, a militia loyal to ex-President Bozizé reportedly killed 40 Muslims and burned hundreds of homes.

“It’s not very different from what happened in Somalia in the early ’90s,” said Thierry Vircoulon, who visited the CAR after the coup in his capacity as project director for Central Africa at the International Crisis Group, and spoke to The Diplomat from his base in Nairobi recently. “The West has no strategy to help and doesn’t care. The security situation is a disaster. There are no state security services, so everyone with a gun is doing whatever they want. There is no rule of law, and the collapse of the state is going to destabilize the region.”

Mark Kaye, the emergency communications manager for Save the Children, speaking to The Diplomat via Skype from the CAR capital, Bangui, said that most schools in the country haven’t been open since last December.

“Thousands of children have seen their homes and their schools burned down or looted; they’ve seen their parents beaten or tortured,” he said. “I’ve met children as young as 5 who were kidnapped by armed groups and were physically beaten in front of their families.”

Kaye said that Save the Children is operating 22 mobile health units around the country but they face a daunting task, as the country’s health care system — which was broken even before the conflict — has completely disintegrated since the coup.

“There is a perception in the outside world that the coup impacted hundreds of thousands, millions of lives here in CAR, when actually, the conflict is directly responsible for a lot of the suffering, but it’s actually accentuating a humanitarian crisis that was happening way before the coup took place,” Kaye said. “For the better part of a decade, this country has been largely ignored by the international community.”

“We are seeing huge numbers of people in need at these health centers,” Kaye said. “I was with a health team near Kaga-Bandoro last week and there were probably 250 people waiting for care; 20 percent of them were children suffering from malaria.”

Vircoulon blamed the international community for a tepid response to the crisis.

“The situation is hopeless because the international reaction has been slow,” he said. “The EU, France and the U.N. are sitting on their asses doing nothing. The first priority is to restore security, so you have to deploy a legitimate international force. The second priority is to address the humanitarian situation.”

The United States suspended operations at the embassy in Bangui on Dec. 28 as a result of the security situation. (The embassy also suspended operations, withdrawing all Americans, in the wake of Bozizé’s 2003 coup and no Americans were in country until January 2005, when a chargé d’affaires was sent to Bangui.) The State Department says that the U.S. government provided $34.8 million in assistance to the CAR in fiscal 2013 — nearly $24 million of that was for humanitarian assistance. A small number of U.S. Special Forces troops are still in the southeast part of the country, providing support to a regional force authorized by the African Union to hunt down Joseph Kony and his Lord’s Resistance Army (LRA) fighters. 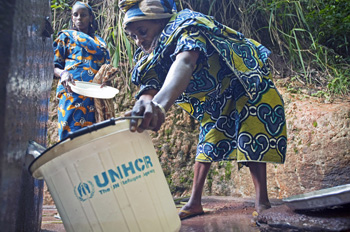 A refugee fetches water from the oldest well in Gbiti, Cameron, located on the border with the Central African Republic. The United Nations says that more than 200,000 Central Africans have been forced to flee their homes, while more than 1.6 million are in need of humanitarian assistance.

When asked whether the U.S. government had suspended aid to the CAR in light of the March coup, The Diplomat received the following response from the State Department, which is no doubt treading lightly regarding the precedent that suspending aid to the CAR would set, in light of the fact that the U.S. government didn’t suspend aid to Egypt despite the unlawful seizure of power there by the military in July.

“Although Section 7008 of the Department of State, Foreign Operations and Related Programs Appropriations Act of 2012 (which pertains to U.S. assistance to countries where a coup d’état has taken place) did not apply to the illegitimate seizure of power by force by the Séléka rebel alliance, the U.S. government, as a matter of policy, suspended most assistance to the central government of the CAR (the process began in late March and was finalized in mid April) with exceptions to allow for assistance that promoted our humanitarian, health, environmental, and democracy goals.”

After seeking clarification, Will Stevens, a spokesman for the State Department’s Bureau of African Affairs, said that the situation in the CAR didn’t qualify as a coup based on Section 7008 because the CAR military played no role in Bozizé’s overthrow.

“For section 7008 to be triggered, a duly elected head of government must be deposed by military coup d’état or decree in which the military plays a decisive role,” Stevens said. “In this case, the CAR military neither deposed former President Bozizé nor otherwise played a decisive role in the overthrow of Bozizé by the Séléka rebel alliance.”

Stevens said that the U.S. government has provided nearly $24 million in humanitarian assistance so far in fiscal 2013 to the CAR. This works out to about $5.21 per citizen. For context, Israeli citizens receive roughly $400 per person in U.S. foreign assistance (most of it military aid); South Africans receive approximately $15 per person; and Iraqis get about $70 per person. According to the USAID website, assistance to the CAR plummeted from more than $37 million in fiscal 2009 to just over $18 million the following year.

The International Crisis Group (ICG) issued a report, “Central African Republic: Priorities of the Transition,” which stated that the new crisis was “a result of decades of poor governance and economic decline in Central Africa.” The report said that Djotodia’s pledge to hold an election (and not run for president) within a year and a half isn’t realistic given the country’s lack of democratic institutions and other structural obstacles. The ICG is calling on the United Nations to send an exploratory mission to the CAR to devise an action plan, budget and realistic timeframe for fresh elections.

The notion that the CAR could host a free and fair election anytime soon indeed seems far-fetched. The French left the country in shambles after granting it independence and provided support over the years to a rogue’s gallery of kleptocrats who did nothing to develop the country. Jean-Bédel Bokassa, who seized power in a coup in 1966, declared himself president for life in 1972 and emperor in 1976, was probably the biggest crook of all. He drove a Rolls-Royce through Bangui’s shambolic streets, reportedly spend $20 million (one-third of the country’s total budget) on a lavish coronation ceremony after declaring himself emperor, and was accused but acquitted of cannibalism. (The accusations came from a former chef who wasn’t credible.)

Bokassa was deposed in 1979, returned from exile in France in 1986, and served six years in prison after being convicted of treason and other charges. Following his release, he declared himself the 13th apostle and died of a heart attack in 1996, leaving behind a reported 17 wives and some 50 children. As horrific as his administration was, his image has been rehabilitated in the CAR in recent years, and today some Central Africans view his reign as a period of relative stability. That tells you all you need to know about how bad the country’s other leaders have been.

Given this sorry history and present humanitarian suffering, why is the CAR considered a “forgotten crisis?” First, the country is always competing with other African nations for the attention of Western policymakers. Diplomats always have fires to put out all around the continent, and the CAR loses out to bigger countries, countries that are considered more strategic based on their natural resources or location, and countries where more blood is being spilled. The CAR has been unstable for decades, but there’s never been one cataclysmic event or famine to command the world’s attention. And the country has always been governed by shady operators unable to win the trust of international donors.

I was the State Department’s desk officer for Chad and the Central African Republic in 2005 to 2006 and even at that time, it was difficult to attract high-level interest in what was happening in Bangui. During my tenure, the State Department had just one American posted in Bangui and no ambassador. Key officials at the State Department were preoccupied with crises in Darfur, Zimbabwe, the Democratic Republic of Congo and a host of other places.

Vircoulon said that the United States has never been engaged in the CAR, but he points the finger of blame at France, the country’s former colonial master.

“Paris doesn’t want to be involved in another African problem,” he said. “[French President François] Hollande says that the U.N. and EU have to deal with the CAR problem. It’s a convenient excuse for Westerners to say that Africans have to solve their own problems. The problem is that there is no money and no will to fix the problems.”

Dave Seminara is a contributing writer for The Washington Diplomat.