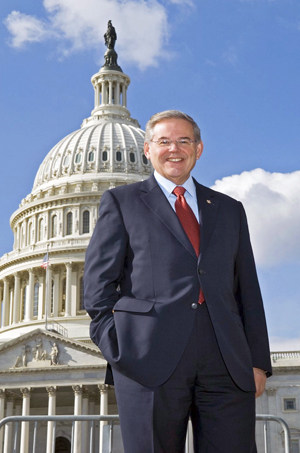 Hours before President Obama would appear before the nation to explain America’s Syria policy in primetime, The Washington Diplomat met with Sen. Robert Menendez, chair of the Senate Foreign Relations Committee and one of the key players in the debate over how to respond to the alleged chemical weapons attack by the Syrian regime. Menendez (D-N.J.) had just returned to the Hart Senate Office Building after a luncheon at the Capitol in which Obama briefed legislators. He was perched at his desk, occasionally glancing at a TV tuned to CNN.

“As a first-generation American, I grew up both coming to understand and cherish that American power is not just about military might, but in the power of our example and our ideas,” says Sen. Robert Menendez (D-N.J.), chair of the Senate Foreign Relations Committee.

Over the past couple of weeks, news surrounding the Syria crisis had streamed in at a lightning clip. Menendez’s committee passed a resolution that authorized the use of force against Syrian President Bashar-al Assad. But the bill’s future in Congress appeared shaky. Then, all of a sudden, a Russian and U.S. demarche was announced that might obviate an attack. Many U.S. policymakers who applauded this would-be diplomatic breakthrough attributed it, in part, to the “credible threat” contained in the resolution approved by Menendez’s committee. (Others say it provided the Obama administration with a desperately needed lifeline to avert the bill’s likely demise in Congress.)

In the closing remarks of the hearing that led up to that vote, Menendez advocated for sending a clear message to Assad by citing a story from his childhood about a neighborhood bully.

“I was walking along the street one day and he just slapped me in the face,” the senator recalled to the hearing room packed with lawmakers, administration officials and journalists. “I went away and told my mom, and she said, avoid him…. A week later I saw the bully again, and I did all my best to avoid him, and this time he punched me in the nose, and it was bloody. And I went back to her and said, ‘You know, Mom, I tried to avoid him.’ She says, ‘Well, just avoid him.’ And it wasn’t till the third time, when we were by a construction site, that I got a piece of wood and whacked the bully, and that was the end of it.”

This became the jumping-off point for The Diplomat’s Q&A with Menendez.

The Washington Diplomat: What other moment from your early life has influenced your decision-making process today and how you deal with the issues you’re faced with on the committee?

Menendez: Well, that same anecdote also taught me, from my mother’s admonishment, that the goal is not to use force in the first instance. If you can avoid it, try to avoid it. But when it became clear to me that I couldn’t, then I saw that there might be a time when the use of force is necessary. So on both ends of the scale, that anecdote has significance.

The other is that my mom was the driver in my family to leave Cuba for the United States. Her willingness to risk everything to come to the greatest country in the world, in which she could be free and her family could pursue its hopes and dreams, has meant that the issues of freedom and democracy are core to my beliefs. At that time, it was about [Fulgencio] Batista, a dictator on the right who she was fleeing, but she didn’t like what she saw happening in the mountains, either, which ended up elevating a dictator on the left [Fidel Castro]. For her, the United States was a beacon of light — of freedom, of democracy. That remains a very important life lesson for me.

TWD: Tomorrow is the anniversary of 9/11. About half of your tenure on Capitol Hill has been spent in the wake of the worst terrorist attack on American soil and during the longest war in American history. How has this affected your views on deploying military force?

Menendez: September 11th is seared into my memory in a way that few things are. We lost over 700 New Jersey citizens. Their lives, and the lives of their survivors, that’s something I always carry as a prominent reminder that the world we knew changed on that fateful day. Now, we have to think outside of the box in terms of dealing with the challenge of terrorism. Who would have ever thought that an airplane — normally used to bring families together, to do business, to go on a vacation — would become a weapon of mass destruction? Who would have thought that a letter could be laced with anthrax to become a weapon of death?

The world changed, in so many different ways.

I also came to understand that our foreign policy and our diplomacy would increasingly have a security dimension. Before Sept. 11, 2001, it was a lot more about relationships between countries, trade, getting countries to join us on economic issues. Yes, that security question was always there to some degree, but it has been heightened dramatically. Now, we understand the security challenges that are before us, not just from states but also from stateless actors. How do we use diplomacy and advocacy to create more allies and fewer enemies? How do we get people to join us in common cause on security issues? How do we come together to stop Iran from seeking nuclear weapons?

You know, my sanctions policies have created a very strong multilateral effort where we have tried to significantly deter Iran from its march toward nuclear weapons in a region of the world that’s already a tinderbox.

All of this is a reflection, in a way, of the experience of Sept. 11.

By the same token, I also understand that there are limits to American military might. I am someone who voted against the war in Iraq and who didn’t believe the intelligence was there to sustain it. So I always look at whether intelligence is sufficiently substantive to engage in the possibility of military action. [In the case of Syria], I believe a credible threat of military action is necessary to, hopefully, get us to a diplomatic and political solution at the end of the day, but, if not, to send a global message. 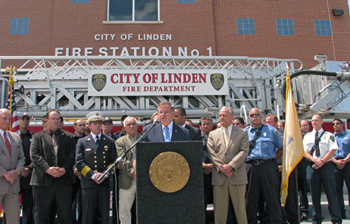 Four months after the Linden Fire Department faced firefighter layoffs due to budgetary constraints, Sen. Robert Menendez (D-N.J.) came to the department’s headquarters to announce a federal grant of $2,406,684 to keep the jobs in place.

It’s important to understand that we are the superpower of the world, but we are not omnipotent. So our foreign policy has to be a confluence of diplomacy and economics, as well as military power.

TWD: How did all of that experience and thinking inform your drafting of the recent resolution to authorize military force in Syria?

Second, I understood that the administration was looking for a forceful, but more limited, military action. One reason we included a prohibition in the resolution against boots on the ground is that the experience of a long war can change the attitude and the thinking of people who have sectarian strife in their country. And we knew this wasn’t the best solution in Syria. Nonetheless, a forceful but limited strike could both deter and degrade Assad’s ability to use more chemical weapons against his citizens and send a global message to the Ayatollah in Iran that we’re serious when we say don’t cross our line on nuclear weapons, to North Korea that we’re serious about protecting the Korean Peninsula and beyond in that region.

So we struck a balance here and made it very clear in the resolution. We gave the president a credible military option in the pursuit of these goals and drafted a resolution that was sufficiently limited to ensure that there would be no boots on the ground and that Congress would play a role in reviewing what our Syria policy would be and what actions would be taken.

TWD: To back up a bit, you mentioned that your family came from Cuba to the United States. How has being a first-generation American influenced your view of America’s role in the world?

Menendez: As I said, I believe that America is a beacon of light to the rest of the world, in terms of our open economy, our democracy and our values. Whenever I travel the world, I see so many people who want to have the freedoms we enjoy. As a first-generation American, I grew up both coming to understand and cherish that American power is not just about military might, but in the power of our example and our ideas. That’s part of our appeal in the world. Through my role on the committee today, I seek to promote those examples and ideas, globally.

TWD: In light of this, how do you think our immigration policy relates to our foreign policy?

Menendez: Immigration is overwhelmingly a domestic issue because it’s about our security, about controlling our borders, about our economy, about who we are as a nation of immigrants. But it also has a foreign policy dimension to it. If, for example, we say to the best and the brightest in the world, there’s a place for you in America, then we attract individuals here who can help us continue to be at the apex of the curves of intellect and innovation. If we say to the people of the world that there is a legal process by which you can ultimately come to America, one that is not so onerous that you would instead resort to an illegal process, then we send a global message as well. That benefits us in terms of our national security, but it also gives aspirations to people around the world to have that opportunity.

*This interview was lightly edited for grammar, clarity and length.