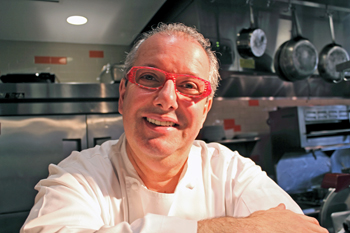 In December, restaurateur Hakan Ilhan and chef Roberto Donna joined forces again to open another Italian concept eatery, Alba Osteria, which is nearly double the size of their other restaurant, Al Dente, but smaller in price, with a more laidback menu inspired by Italy’s Piedmont region.

In 2012, Al Dente (originally called La Forchetta) was named one of the 20 best new restaurants in America by Esquire magazine, which also recognized Donna as its chef of the year. Alba is another step in the restoration of Donna’s reputation after years of legal and financial woes and reveals the culinary genius that made him one of the leading chefs in the area when he presided over Galileo (arguably the best Italian restaurant ever in the District) and roughly a dozen other successful restaurants since coming to D.C. in the early 1980s.

In a shift away from Donna’s usual formal style, the partners based Alba on the osteria model. More casual than a trattoria, osterias began as places to drink the local wines while munching on simple fare but gradually evolved to emphasize the food as well.

Moving further downtown from Al Dente, which is close to American University, Ilhan and Donna selected a large corner space on I Street in the Mount Vernon Triangle district. The area, not long ago known primarily for its parking lots, has transformed into a neighborhood populated mostly by young professionals. Ilhan and Donna went with the osteria concept to cater to this demographic, making it flexible, casual and slightly more affordable than its uptown big sister, Al Dente.

To bring his vision for Alba to life, chef Donna turned to longtime colleague Amy Brandwein, who began her career in the pastry kitchen at Galileo before going on to serve as the executive chef in several of Donna’s restaurants as well as helming the well-received Casa Nonna before it closed.

For Alba’s culinary inspiration, Donna turned to the home of his youth, the Piedmont region of Italy (Piemonte in Italian), an area known for its wine making and agriculture; and for its name, the city of Alba, which sits at the heart of the Piedmont wine industry and is a culinary mecca in its own right. 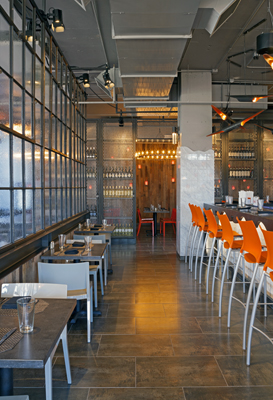 For a simple snack or starter, Alba’s cheese and cured meats plate — served with pickled vegetable, hazelnut honey and sticks of sugared fired bread — offers diners delicious options, such as the finocchiona (pork sausage with fennel and garlic) and the Piedmont classic castelmagno, a blue-veined, semi-hard, cow-sheep-goat cheese.

Where Donna and Brandwein really elevate Alba’s menu is with the piatti caldi. These sizeable selections offer simple but perfectly executed dishes — exemplified by the subric, three crisp fritters, each filled with eggplant, potato and cauliflower, that are served with bagnetto rosso, a rich Piedmont tomato sauce. Another standout is the cauliflower sautéed with anchovy, egg and grated hard cheese. More complex creations such as the capunet — savory cabbage rolls stuffed with braided duck and spiced quince paste — and the robiola allo speck — cheese wrapped in thin slices of speck and melted over a mound of French fries dressed with garlic sauce — are classic Donna dishes. Robust and rich, they also represent classic Italian at its very best.

Both the pastas and pizzas are equally good in their own way, and like the small plates, do not rely on subtlety for their appeal. The angolotti al brasato is brimming with the flavor of braised beef, bone marrow and cheese, while the cannelloni alla barbaroux melds beef, pork and sausage ragu with béchamel sauce and Parmesan.

The Neapolitan pizzas are prepared in a huge wood-burning oven that’s a centerpiece of the restaurant and produces perfectly thin, chewy crusts. Varieties range from a plain marinara with tomato, garlic, olive oil and oregano to the piemontese, which is topped with fontina, fresh mozzarella, porcini mushrooms, pork sausage and rosemary. The pies are big enough for two but, in the classic Italian style, the toppings are used sparingly so as not to weigh the pizza down.

Presiding over the kitchen at Alba Osteria as the chef de cuisine, Brandwein’s particular genius for pasty is evident on the dessert menu. Some of the choices are whimsical. The salame di cioccolato is a sausage-shaped log of dense dark hazelnut and rum-flavored chocolate served with a portent zabaglione. Others are more traditional, such as the torta gianduja, a rich chocolate cake made with apricot marmalade and gianduja (a hazelnut chocolate spread invented in Turin, Piedmont’s capital), and served with a pot of hot milk chocolate sauce. Still others defy classification. The coppa di torino is a concoction of cookies soaked in Nocello liqueur, served with oddly textured hazelnut gelato, candied chestnuts, meringue fingers and preserved dark cherries. But perhaps the best of the desserts, startling good in its simplicity, is the polenta bianca, an oasis of white polenta baked with a thick caramel crust and complemented by house-made gelato. 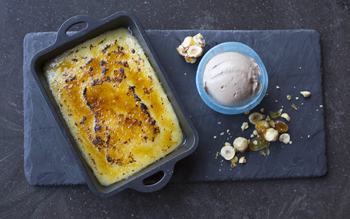 Startling good in its simplicity, the polenta bianca dessert is an oasis of white polenta baked with a thick caramel crust and complemented by house-made gelato.

The restaurant’s décor mirrors the relaxed style of the food. Ilhan turned to Matthew Norris of the Atlanta-based Norris Design Studio, a franchise design specialist that has worked with Ilhan on his other projects, including Al Dente. Norris faced the challenge of interpreting the osteria concept — typically rural, small and casual — within 5,500 square feet of urban space. He didn’t attempt to recreate the Italian countryside but did try to capture that rustic feeling. The large space is broken into smaller sections, each with a different focus. In a clever bit of recycling, the main architectural element creating the sections is a wall made of elegant metal-and glass panels from an abandoned crayon factory in Sandusky, Ohio. Norris also uses the same black, white, gray and orange accents he used in Al Dente, but to quite different effect. Though industrial elements dominate Alba’s design, the ambience is warm, especially in the cozy seating arrangements around the beautiful red-and-orange-tiled pizza oven and the chef’s table.

Comfort is a key part of Alba’s service strategy, and staff work hard to make each visit a success. Alba is still ironing out its service, though, and the experience can be inconsistent. Large crowds pose a bit of a challenge, and the timing from kitchen to table may leave long lags between courses, or too many dishes on the table at once. Staff, however, are uniformly helpful and well prepared, even though some are clearly new to the business.

Though still experiencing some opening hiccups, Alba is a welcome addition to the Mount Vernon Triangle and a welcome sign that Donna has firmly turned the corner and returned to his culinary roots. The opportunity to sample his work in a casual, comfortable and affordable setting is all the more reason to celebrate.