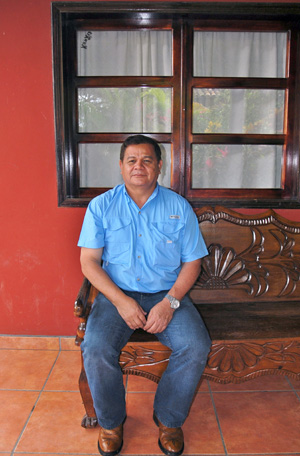 A hero to some Hondurans and a traitor to others, Brig. Gen. Romeo Orlando Vásquez Velásquez says his impoverished country must get back on track — and quickly.

Vásquez, 57, ran for president in last November’s elections, yet he ended up with only 6,105 votes — barely 0.2 percent of the 3.1 million ballots cast. That ranked Vásquez ahead of three other minor candidates but landed him in fifth place far behind the winner, Juan Orlando Hernández of the conservative National Party, and Hernández’s main rival, Xiomara Castro de Zelaya — wife of the deposed former president, Manuel “Mel” Zelaya.

Born in the Honduran mountain town of Siguatepeque, Vásquez attended the U.S. Army’s School of the Americas near Fort Benning, Ga., in the 1970s and 1980s. The school — now known as the Western Hemisphere Institute for Security Cooperation (WHINSEC) — had been founded in 1946 and spent most of the Cold War teaching “anti-communist counterinsurgency training” to generations of Latin American military leaders.

Romeo Orlando Vásquez Velásquez worked closely with Americans as head of the Honduran Armed Forces, but the presidential candidate is no longer welcomed by Washington.

Vásquez rose through the ranks and was eventually named chief of the Honduran Armed Forces. Yet the irony for this career military officer is that despite his lifelong love for the United States, Vásquez may not set foot on U.S. soil. That’s because officials at the U.S. Embassy in Tegucigalpa permanently revoked the brigadier general’s American visa in 2009 after his men forced Zelaya from power and put the president on a plane to Costa Rica while still in his pajamas.

“They took my visa,” Vásquez told The Washington Diplomat by phone from his home in Tegucigalpa. “President Zelaya wanted to change the system through a referendum, but the judges at all levels — right up to the Supreme Court — had determined that he was committing an illegal act. The armed forces are obliged to maintain public order and defend the nation, not violate the law.”

Zelaya’s detractors say the populist leader wanted to follow in the footsteps of Venezuela’s late president, Hugo Chávez, by changing the Honduran constitution to let him remain in office indefinitely. His supporters deny that, accusing Vásquez and the Honduran military — backed by the country’s political and business elite — of staging a coup d’état with tacit support from the United States as retribution for Zelaya’s efforts to spread the country’s wealth to its impoverished masses. One thing neither side can dispute: Honduras’s many problems. It is one of the poorest, most unequal countries in Latin America, with rampant drug trafficking, endemic corruption, shoddy rule of law and the world’s highest murder rate to boot.

Another thing nobody disputes is the fact that Zelaya ordered Vásquez to secure ballots and handle logistics for the upcoming referendum — or that the attorney general and the courts later ruled that vote illegal because it would have opened the door to modifications that are outlawed by the Honduran constitution.

When Vásquez refused to help with the referendum, the president immediately fired him and planned to go ahead anyway with the constituent assembly, which Vásquez said would have been “an act of treason.” So he decided to move against the president and mistakenly assumed Washington would back him all the way.

“I was looking for support from the U.S. Embassy, but they were bothered by what was happening in Honduras. At the time, I had very good relations with Southcom [the U.S. Southern Command]. We were working together in many projects, training troops, doing international peace missions and fighting drug trafficking. We had a very good relationship with the U.S. Army,” he recalled with some bitterness. “But then they suspended my visa simply because of the events of July 28, 2009 — even they knew that I was following an order from the Supreme Court.”

Vásquez said that Hugo Llorens, who at the time was U.S. envoy to Honduras, personally gave the order to revoke the general’s visa. He also claims Llorens was a personal friend of Zelaya’s as well as his partner in several unspecified business ventures.

After leaving Honduras, Llorens was appointed assistant chief of mission at the U.S. Embassy in Kabul, Afghanistan, a post he held until last October, when he was named principal officer at the U.S. Consulate in Sydney, Australia. Through his press attaché, Llorens declined comment for this story, though secret diplomatic cables sent by Llorens to Washington at the time and later exposed by WikiLeaks reveal that the U.S. Embassy in Tegucigalpa considered Zelaya’s ouster to be an unjustified conspiracy.

“No matter what the merits of the case against Zelaya,” one of the cables reads, “his forced removal by the military was clearly illegal, and [Roberto] Micheletti’s ascendance as ‘interim president’ was totally illegitimate.”

In fact, with a history of instigating coups against leftist Latin leaders during the Cold War, the United States initially won praise throughout the hemisphere for condemning the events in Honduras, even though Washington was no fan of Zelaya.

Even so, Vásquez hopes the Obama administration will reinstate U.S. visas for himself and his immediate family.

“The actions of some officials in the State Department have been very hard on my wife and my 15-year-old daughter, who in 2011 was detained at Miami International Airport for 24 hours. It’s been hard on all of us.”

Yet Vásquez has fared just fine back home. Following Zelaya’s ouster, new elections were called, though they were largely boycotted by supporters of the deposed president. The winner was businessman Porfirio Lobo Sosa, who took office in January 2010 and promptly named Vásquez as head of Hondutel, the state-owned phone company that has been mismanaged for years.

In 2007, Hondutel became the focus of an investigation by local authorities as well as the FBI. Several of its top officials were charged with having received million-dollar bribes from U.S. telecom firms in exchange for granting those companies lower rates on lucrative international calls.

“Many of its officials were involved in illegal things, and the company wasn’t paying its taxes,” Vásquez said, adding that because Hondutel’s assets were mainly in fixed-line services, it quickly got left behind when mobile technology became widespread. As a result, the company lost its monopoly and is now stuck with antiquated technology, further discouraging foreign investment.

Vásquez left Hondutel in 2012 and reinvented himself as a politician.

“I created the Alianza Patriotica Hondureña [Honduran Patriotic Alliance] as an independent political party,” Vásquez told The Diplomat, noting that despite his fifth-place showing in the 2013 presidential election, his party’s candidates for mayors and deputies to the National Assembly got a total of around 200,000 votes in the last election.

The country’s new president, Hernández, won that election with 37 percent of the vote, followed by Xiomara Castro at 29 percent. The two other contenders who outperformed Vásquez were Mauricio Villeda of the Liberal Party (20 percent) and the Anti-Corruption Party’s Salvador Nasralla (13 percent).

Castro vowed to contest the results, claiming allegations of vote buying, intimidation, ballot box stuffing and violence against her fellow party members. The United States, European Union and Organization of American States, however, deemed the vote reasonably free and fair. 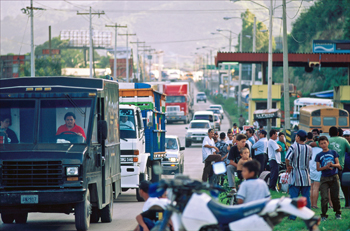 That’s unlikely to quell anger among Castro’s supporters, many of them laborers and peasants fed up with the entrenched upper classes that control Honduras’s economy and politics. But the recent election may mark a turning point in the country’s traditional two-party system, long dominated by the conservative National Party and leftist Liberal Party.

Where that leaves Vásquez, a member of the establishment, remains to be seen, although it’s clear the military will continue to play a powerful role in Honduran politics under the new administration. Hernández backs the deployment of more soldiers on the streets to control violent crime as well as what his detractors call “neoliberal” economic measures that have actually increased income inequality in Honduras since the 2009 coup.

“We’ve been organizing on a national level, strengthening our party so we’ll have a chance for the future,” said Vásquez. “In general, we saw no great difficulties with this last election. Some said there was fraud, but this is normal when a party loses. Xiomara had lots of support from leftist parties around the world, but they didn’t win the election.”

“We have met on many occasions and political events, and we’ve even spoken,” he said. “I don’t have any problem with him. But friendship ends where duty begins.”

In fact, Vásquez says he wants the same things the Zelayas want; how to achieve those goals is another story. “Their solution is to hand out money that doesn’t exist. Our solution is to train youth and build technical schools, help them learn new skills. That’s the difference between us and them.”

Like the Zelayas, Vásquez said his country’s biggest problem today is the fact that 70 percent of its 8 million inhabitants live in poverty. Ranked by annual per-capita income, Honduras is the third poorest country in the Americas; only Haitians and Nicaraguans are poorer.

“Most of the money that’s sent to the country to fight poverty never reaches the people. There is so much corruption,” he explained. “The problem with corruption among police is institutional, not personal. This is a long process. We must lift the morale of the institution and hire honest cops.”

Indeed, when it comes to honesty in government and business, few would confuse Honduras with, say, Finland or Sweden. Last year, it ranked 140th on Transparency International’s 2013 Corruption Perceptions Index — one of the worst performances by any country in the Western Hemisphere.

“We need to promote foreign investments, train our youth, and open the world diplomatically,” Vásquez said. “We have so many natural resources, but we still must create sources of employment and the appropriate conditions for foreign investors to come.”

And critical to creating those “appropriate conditions” is taming the country’s spiraling crime. Honduras for several years has had the world’s highest homicide rate — and San Pedro Sula ranks as its most violent city, with 169 intentional murders per 100,000 inhabitants in 2012.

Vásquez told The Diplomat that while he was head of the military, he pleaded with Zelaya to approve the purchase of radar equipment to help his soldiers interdict drug traffickers. He claims the president refused to do so — which is why Honduras continues to be a favorite transit point for cocaine smugglers.

“Honduras doesn’t have good maritime or air security defenses. We don’t even have radars. All the drugs come from South America, flown into clandestine airstrips on their way to the United States,” the general said. “We must also fight narco-trafficking on our borders because drug consumption is plaguing our cities. Defending our country is the responsibility of all Hondurans.”