Home The Washington Diplomat January 2013 ‘According to What?’ Gives China’s Political Provocateur His Due 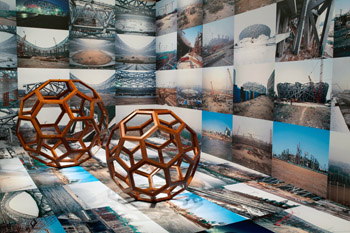 For “Ai Weiwei: According to What?” the Hirshhorn devotes nearly two floors to the Chinese artist’s sculpture, installations, audio/video projects and photographs, including works such as “Beijing’s 2008 Olympic Stadium,” “Divina Proportione” and “F-Size.”

Chinese dissident artist Ai Weiwei is both celebrated and criticized in his homeland, but he gets an unabashed hero’s welcome in the Hirshhorn Museum’s expansive and urgently contemporary new exhibition.

“Ai Weiwei: According to What?” is the artist’s first survey show in North America and the Hirshhorn goes all out to give the cutting-edge political provocateur his due. The full circuit of the building’s second-level galleries, as well as some third-floor space, is devoted to Ai’s sculpture, installations, audio/video and photography.

The exhibition is accompanied by “Ai Weiwei: Circle of Animals/Zodiac Heads,” a monumental 12-part sculptural suite by the artist installed around the perimeter of the fountain on the museum’s plaza.

Back inside the museum, the sheer number of Ai’s black-and-white photographs is a bit mind numbing, but the overall exhibition — arresting in scope and timely in subject matter — is never dull.

Ai’s courage in the face of stiff Chinese government oppression is admirable and inspiring. (The artist, who designed the “Bird’s Nest” stadium for the 2008 Olympics in Beijing, has routinely been harassed and detained by authorities.) He captures intimate and kinetic images with his camera and the sheer effort he puts into his installations (3,200 hand-painted ceramic crabs anyone?) burnishes his credentials as a serious contemporary artist.

In a statement that accompanies the exhibition, Ai explains that the Hirshhorn exhibition is based on a 2009 show at Tokyo’s Mori Art Museum, but has been developed especially for the United States and includes new works and fresh perspectives on the old. It will all be new to many American viewers. 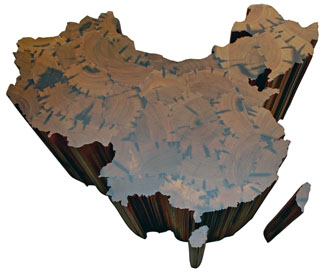 Ai’s art doesn’t aim to please; it aims to provoke — and it succeeds. His work conjures contempt for authority and confronts established notions of class and tradition. A tendency toward belligerence is understandable given the burly, bearded 55-year-old activist’s gritty, hardscrabble history. Ai, whose poet father was banished to a Chinese labor camp when he was an infant, grew up poor and was put under house arrest by Chinese authorities for 81 days last year. The official charge was tax evasion, but Ai and many of his supporters are convinced the real reason was his government criticism.

The first gallery in the exhibition is devoted to large-scale photographs of Beijing’s 2008 Olympic Stadium. Ai shows the futuristic architecture in various states of construction, during different seasons and multiple times of day. Some images include workers milling about like ants, causing the viewer to consider if the structure is, indeed, “bigger” or more important than the individual.

Ai’s choice of materials is, at times, stunning. An installation of ironwood from dismantled temples of the Qing Dynasty — stacked with pieces of various sizes and framed with iron parallel bars — is fascinating to look at, but at the same time a challenge. The lighting is too dim to absorb the full impact of the installation. It seems to exist in the shadows.

“Map of China,” a three-dimensional look at China, also uses hardwood but instead of simply stacking the wood, Ai uses traditional Chinese joinery techniques. It is a monumental effort but the height of the piece makes it difficult for all but the tallest viewer to obtain full perspective — much like the abstract and murky view most outsiders have of the sprawling, complicated nation itself. 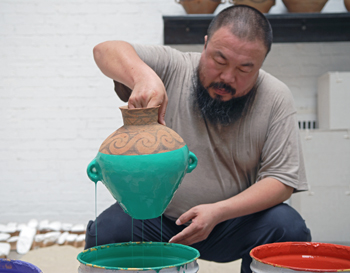 Entering the second gallery, viewers begin to sense the importance of black-and-white photography to Ai’s body of work. Hundreds of small framed photos line the walls, most of them bleak and foreboding. The artist even manages to make New York’s Coney Island amusement park — usually depicted as a place of joy and reverie — a little sinister.

Many of these photographs are more journalism than art and, not surprisingly for Ai, render authority figures as hostile and imposing. One photo shows several cops staring innocuously into the foreground while a single officer appears to glare at Ai’s camera.

The artist is very interested in the meaning of artistic value, and true to form he challenges it in a photograph of himself dropping a Han Dynasty urn, venerated precisely because it was made roughly 2,000 years ago. In this and other works, such as “Coca-Cola Vase,” Ai destroys the old to create the new. The artist also finds new uses for old furniture.

For “Grapes,” wooden stools from the Qing Dynasty have been rejoined by artisans into a spiky cluster — seats in, legs out — giving new utility to objects that might have outlived their usefulness. Meanwhile, “Ruyi,” a bluish-green porcelain dragon sculpture, is all fine lines and elegance, a marked contrast to some of Ai’s other works and proof that he is capable of classic tradition.

Ai Weiwei — one of the few artists effectively challenging China’s authoritarianism — is one of the most important and controversial contemporary artists of the early 21st century. The Hirshhorn rightfully gives him a proper and compelling stage.

Ai Weiwei: According to What?