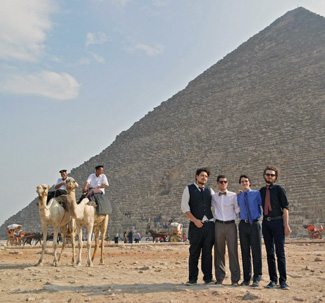 The Boston Boys stopped by Egypt as part of a recent musical tour through the Middle East organized by American Music Abroad, which sends American bands overseas to engage with audiences and communities.

Somewhere etched in memories and images of Louis Armstrong being royally greeted by throngs in Cairo and blowing his trumpet to the ear of the sandy sphinx, or of Duke Ellington’s regal jazz ambassadorship as he stared down at sitars, American cultural diplomacy found its groove.

The American Music Abroad program represents the evolution of the great Jazz Ambassadors tours organized by the State Department that once had the world enthralled with the swing of the beat. Today, American Music Abroad artists represent the new generation of citizen diplomats creating musical exchanges abroad.

American Voices administers the American Music Abroad program on behalf of the State Department’s Bureau of Educational and Cultural Affairs. Since 1993, American Voices has been conducting cultural diplomacy as a means to foster people-to-people connections. Founded with a focus on bringing American music and culture to the recently independent nations of Central and Eastern Europe, American Voices has expanded its mission to support youth through cultural and educational programs in nations emerging from conflict or isolation. The American bands that are sent overseas participate in public concerts, lectures, demonstrations, workshops, media outreach and collaborations with local musicians.

To project the full spectrum of the American musical landscape, all musical genres are invited to apply for the American Music Abroad program. The most recent season included blues, bluegrass, cajun, country, folk, Latin, Native American, gospel, hip hop, indie rock, jazz, R&B and zydeco. In short, any and all musical traditions that can claim roots in the diverse American musical canon are welcome to apply. 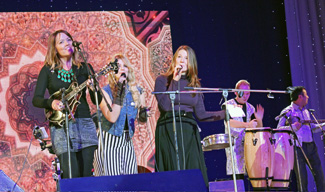 Della Mae performs at Turkestan Palace in Tashkent, the capital of Uzbekistan, where the five-girl bluegrass ensemble from Massachusetts collaborated with Uzbek music star Jassur and Sultan.

The crop of musical diplomats for the 2012-13 season were selected from nearly 300 applications; music ensembles applied from more than 40 states, as well as D.C., Puerto Rico and the U.S. Virgin Islands, and represented a tremendous variety of musical styles and world-class experience. From bluegrass to hip hop to Hawaiian slack key guitar, the American Music Abroad program is designed to communicate America’s rich contributions to the global music scene as it fosters cross-cultural communication and people-to-people connections with global audiences.

Prior to going abroad, American Music Abroad ensembles perform and work with students in Washington, D.C., as they conduct their orientation. Before heading off on a five-country tour in Africa, the Detroit-based hip hop group Mahogany Jones-Live had a poignant and inspiring concert at Duke Ellington School of the Arts — poignant because of the connection to a school named for the pioneer Jazz Ambassador, and inspiring as hip hop artist Mahogany Jones rhymed to teach girls respect and empowerment through hip hop poetry.

American Music Abroad ensembles traveled to nearly 50 countries around the world during the 2012-13 touring season. These musical diplomats perform at national halls and offer master classes to music students to teach American musical mosaic. And they reach beyond concert halls, with a focus on interaction and collaborations with local musicians.

“Communicating through rhythm and melodies is an experience that transcends boundaries and transcends language,” said mandolin player Eric Robertson with the Boston Boys, which just concluded a musical tour through the Middle East, from the Atlas Mountains in Morocco to the deserts of Saudi Arabia. 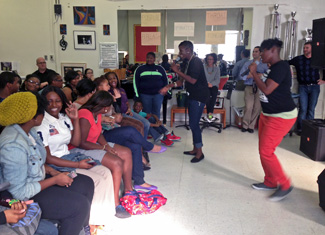 Before heading off on a five-country tour in Africa, the Detroit-based hip hop group Mahogany Jones-Live engaged with students at the Duke Ellington School of the Arts in Washington, D.C.

I recently toured with the dynamic five-girl bluegrass group Della Mae for a “Bluegrass on the Silk Road” tour of South and Central Asia. American Music Abroad activities focus on younger and underserved audiences in countries with little or no access to live American performances. As such, Della Mae kicked off their tour in Pakistan, in Islamabad at the all-female Fatima Jinnah University, a first of its kind in the nation.

Della Mae’s presence on campus was akin to that of the Beatles or the Rolling Stones — the female university students were so excited to hear the female bluegrass band that they literally tore the doors off the hinges of the theater to get in on the sound check warm-up. “We’ve never played for crowds so excited and enthused to hear live music,” said Della Mae fiddler Kimber Ludiker.

Meanwhile, there is a real focus on collaborating with local musicians on songs that resonate with local audiences. While on their tour of Thailand amid a Southeast Asian swing, the Alabama acoustic rock band Act of Congress worked with Thai music students to learn and perform “His Majesty’s Blues,” a piece written by the Thai monarch, borne out of his days jamming with the Jazz Ambassadors.

As it looks forward to a new season of sending American talent abroad, the American Music Abroad program is building on the rich legacy of U.S. cultural diplomacy programming, while shaping a whole new generation of musical diplomats.