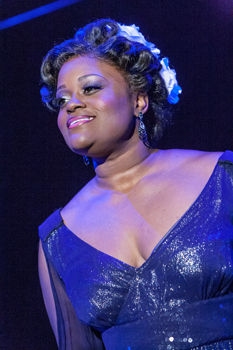 The theater’s own breakout star, Nova Payton, has a lot in common with the diva she plays, Effie White. They’re both vocal powerhouses scaling the entertainment ladder of success. The fact that Payton, an up-and-coming local actress, portrays the fictional character of Effie, who rose to storybook stardom a few decades ago, makes it all the more poetic.

Signature audiences acquired a taste for the imposing Payton when she played Motormouth Mabel in the theater’s recent production of “Hairspray,” for which she deservingly received a Helen Hayes Award. Here she exhibits the comedic and vocal chops of Mabel, and exceeds expectations in her leading role as a headstrong singer sidelined by showbiz backstabbing.

After this not-to-miss production, Payton’s celebrity is sure to soar, as does Effie’s by the play’s end. Let’s just hope that Payton’s ascension will be less tormenting than Effie’s struggle in the harsh world of show business, which is brought to life in this production with believable but ruthless candor.

“Dreamgirls,” inspired by the story of the Supremes and other 1960s black girl pop groups, follows the highs and lows of a trio of singers from Chicago: Effie, Deena Jones and Lorrell Robinson, who team up with used-car-salesman-turned manager Curtis Taylor Jr., Effie’s brother C.C., and soul singer Jimmy “James Thunder” Early.

The rise of this motley crew of musical hopefuls to stardom is marked by ambition, greed, betrayal, bribery, cheating, deceit, misunderstanding, jealousy, insecurity, hurt and all the other hallmarks of showbiz success. Curtis lies at the heart of much of the pain, although each of the characters has their fair share of flaws — redeeming and otherwise.

Signature successfully recreates the world of 1960s R&B acts, bringing the audience back to a time when women wore beehives on their heads and hip-hugging gowns while men donned lame suits — and neither feminism nor civil rights had yet to hit their stride.

Image was everything. In the same way the Supremes had to groom a flawless look and sound in order to cross over from an African American audience to a white male-dominated music industry, director and choreographer Matthew Gardiner crafts a seamless visual and auditory triumph.

The success of this production is clearly a group effort. Adam Koch’s dazzling, multilevel, movable set makes up for Signature’s lack of stage space. Characters sing and dance on platforms that rise or descend, according to their emotions and temperature. Costume designer Frank Labovitz and lighting designer Chris Lee perform what appears to be magic. In one instance, while Effie belts out “I Am Changing” — about how she’s transformed from her innocent beginnings — her dress transforms from knee-length casual to floor-touching evening gown in mid-song.

Although the show is famous for its pleasing and rousing score, the superior dancing and choreography (kudos to co-choreographer Brianne Camp) can’t be overlooked. It is simple, straightforward, polished and stylized, not unlike the script’s story line, and showcased in numbers like “Steppin’ to the Bad Side” and “Heavy.” 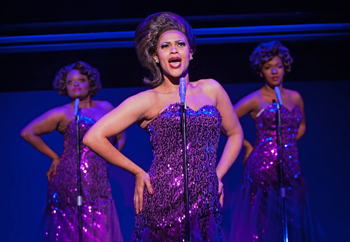 This production thankfully doesn’t fall prey to a common mistake in musicals: The performers weren’t just cast for their singing prowess; they can also act. This is critical when a smaller theater stages such a quintessential hit like “Dreamgirls,” which will undoubtedly be compared to its stunning run on Broadway and successful 2006 movie remake.

Payton’s emotional performance has many peaks, but she strikes her highest chord with the infamous showstopper and Grammy-winning hit “And I Am Telling You I’m Not Going.” Payton’s seemingly effortless commanding soprano voice, combined with her dexterous acting, bring down the house at the close of Act I. This is perfect timing, because it gives the audience a chance to wipe their eyes and get a fresh stash of Kleenex for the second act.

While Payton is clearly incomparable, the ensemble has another star. When all eyes and ears aren’t on Effie, they are on Cedric Neal, who gives a larger-than-life, unabashed performance as the dysfunctional, but highly entertaining Jimmy “James Thunder” Early, a tragic soul singer whose dreams of making it big were crushed by his own narcissism and the cruelty of the business. Although the focus is on how females were victimized in the music industry, Neal deftly brings to life the competitiveness, deceit and disingenuous nature of “the business” that can hurt everybody.

The other two women, rounding out the Dreamgirls, give solid performances. On this particular night, the role of Deena Jones, usually played Shayla Simmons, was played by Lauren Du Pree, and the role of Lorrell Robinson was played by Crystal Joy. Except for a few uneven missteps (quite understandable given the show’s quick tempo), it was hardly noticeable that Du Pree was an understudy. Sydney James Harcourt was sufficiently slimy as the underhanded Curtis Taylor and crooned smoothly in “You Are My Dream.”

Signature Theatre extended this show into the New Year with good reason. For Motown aficionados to opera fans and everyone in between, this cast of characters and crew are bound to make you feel the gamut of emotions. Just listen to the music and let their dream take your heart away.