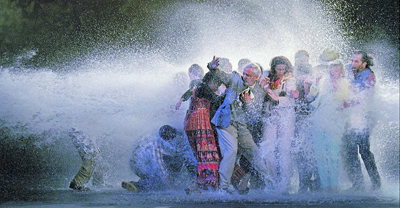 Water is often featured as an elemental force in the video art of Bill Viola, as seen in works such as “The Raft.”

The crowd of strangers stands tightly together as if at a bus stop, not acknowledging each other’s existence while lost in their own worlds, before an inescapable deluge of water roughly knocks them to the ground, leaving them cowering with arms raised for protection.

Then the strangers of different ages and ethnicities stop ignoring each other. Shot in slow-motion video, they embrace and help each other up, sharing a moment of compassion and community after surviving a faceless foe, perhaps the brutal force of nature or riot police armed with a fire hose. Called “The Raft,” the video art performance is the most powerful work by groundbreaking video artist Bill Viola in the National Portrait Gallery’s first exhibition dedicated solely to media art. Titled Bill Viola: The Moving Portrait, the show examines themes of life and death, grief and redemption, and spirituality and devotion.

Viola, now 65 years old and living in Long Beach, Calif., has been a pioneer in video art since its inception in the late 1960s when he first saw a clunky portable video camera as an art student at Syracuse University. After almost drowning as a child, Viola’s work frequently features water as an elemental force of both life-giving sustenance and potential destruction.

In “Three Women,” a mother and her two daughters appear in black and white behind a cascade of water. As they slowly move through the downpour, they are suddenly transformed into color as their dripping bodies move forward, silently gazing outward before turning and passing back through the water into the distance where they fade into static. “They look like statues that are moving!” my 4-year-old son proclaimed while we sat on a bench watching the nine-minute slow-motion video. And their slow, deliberate movements do impart a sculptural quality to the women, who seem timeless and removed from this world in a disquieting limbo, a place representing the passage of life and the inevitability of death.

The theme of immortality continues in the next gallery in “Man Searching for Immortality/Woman Searching for Eternity,” where slow-motion videos of a nude elderly man and woman are projected onto black slabs of granite, a material often used for gravestones. In a society obsessed with youth and beauty, my first instinct was to turn away from seeing their nude bodies, marred by sagging breasts and wrinkled skin. But their shared humanity, and ours, shines through while they use small flashlights like a doctor’s probe, slowly scanning their own bodies as if searching for a hidden ailment or the path to immortality. Then their figures become hazy, fading to static like a blank television channel, gone from the here and now into the hereafter.

In the 1980s, Viola traveled to Japan with his wife for an artist fellowship and studied Zen Buddhism, which influenced his work and his views about spirituality. He also lived in Florence in the 1970s and has an affinity for early Renaissance religious paintings, characterized by their bold and confrontational expressions of emotion, the anguish of Christ, the zealous devotion of his followers and chaotic battles between angels and dark forces.

The exhibit is the first survey of Viola’s work within the context of portraiture, exploring how he employs facial and body language to reflect on the human experience. The National Portrait Gallery isn’t well known for contemporary art so the exhibition is a welcome step into the 21st century and an exploration of portraiture that isn’t as literal as most of the museum’s collection.

The museum created some small black-box galleries for the projections that will be used in future media art exhibitions. In “The Dreamers,” I was immersed in a room surrounded by seven large, slow-motion projections of people of different ages and races holding their breaths underwater, their eyes closed above a floor of sand and pebbles. The lapping water occasionally distorts their faces and bodies like a carnival mirror, and the only signs of life are the occasional bubble of air escaping to the surface. My eye kept being drawn back to a young girl whose long brown hair framed her head in a giant swirl like a halo above her ruffled red blouse, which resembled the curving petals of a flower or a ridged bed of corral.

Surrounded by these life-size figures, I began to feel like I was underwater as well, floating silently with them. I felt both a sense of anticipation and timelessness. When will these unknown people surface for air or are they lost in a state of suspended animation, caught in a world of dreams from which they may never awaken in some unseen place between life and death that may be full of joy or horrors?