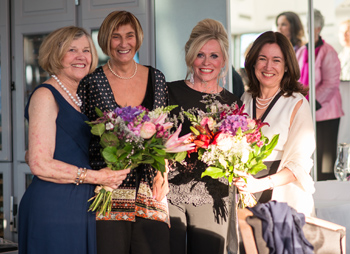 The best way to foster world peace is through understanding, cross-cultural interaction and education, says the president of Welcome Clubs International (WCI), an association that aims to bring together international women’s clubs worldwide for just this purpose.

WCI was born of the Welcome to Washington International Club, founded in 1959 by Marian Adair. As the wife of a congressman — Rep. E. Ross Adair of Indiana — who attended many diplomatic functions, she realized that the diplomats’ wives would often leave Washington without having made an American friend or seeing the inside of an American home. The club changed that, and “members of Welcome to Washington not only enjoyed getting to know and befriend Americans, but they found the concept of a club very appealing and very often once these ladies returned to their own country, they’d start a club in the image of Welcome to Washington.”

As the number of clubs grew, it became necessary to have an overarching organization that could facilitate communication among the independent member clubs, and that’s how WCI came to be in 1986. It is a forum for clubs and members to exchange ideas and develop relationships free from political, religious and cultural differences, Arduino said.

All WCI clubs throughout the world are autonomous. Some engage in charitable and civic activities in their communities, while others focus on cultural awareness. Clubs range in size from 25 to 900 members. The Welcome to Washington branch, for instance, has over 500 members from 80 nations and hosts events such as behind-the-scenes tours of D.C., cooking demonstrations, language groups, docent-led art tours and other activities. WCI only requests that individual clubs share the association’s mission of friendship and understanding.

“Our clubs share a common goal of cross-cultural education, understanding and friendship,” Arduino said. “Our mission is to gain understanding through friendship and to form friendships through understanding, and in this way we build personal connections with women in the belief — and I truly believe this — that this will eventually influence positive relationships between countries. We believe we can help to achieve peace as we strive to relate to one another with respect and care in our associations of international women.”

Part of WCI’s role as a facilitator means it holds various meetings in locations worldwide. This year, the WCI board of directors will meet in Cyprus, the executive committee will convene in the United States in November and there will be a formal inauguration of a new club in South Korea in the fall. WCI’s main event, the international conference, will take place May 2018 here in Washington.

Although WCI is apolitical and nonreligious, members are interested in current events, Arduino said. “I think people do have an interest in getting to know about the ongoing situation in the world, and I think we cannot be blind to the fact that there are many things going on, such as the refugee [crisis], for example,” she said. “One of our speakers at our international conference in Prague specifically spoke about the refugees and immigration in Europe.”

As it works to foster relationships now, WCI is also looking ahead. It is examining ways to take a more active stance on educating women, for example, Arduino said, and to better enable its communication with other international organizations.

“In this globalized world, one organization cannot work alone. It is very important to reach out to other international organizations that share our goals of fostering peace and understanding,” she said.

WCI is also exploring technology as a way to help connect women globally. When members can’t travel to meetings or conferences, they can dial in through Skype, for instance. WCI is also working to have a more interactive website for members.

“In five years, we see WCI growing in member clubs, strengthening the communications and relations among member clubs, promoting the education of women and establishing relations with other international organizations to work collaboratively,” Arduino said.

She became involved in WCI through the club in Porto Alegre, Brazil, in 2008 [s1] and became president of WCI in 2016. Her goal is to visit all 22 sister clubs, although she doubts she will be able to pull that off before her term ends in 2018.

“I think it’s very important that whenever possible … to travel to meet in person the various sister clubs. This helps maintain good relationships,” she said.

So far, she has been to the clubs in Florida, Jakarta, London, Prague and San Diego. This year she plans to go to South Korea, Porto Alegre and several U.S. cities.