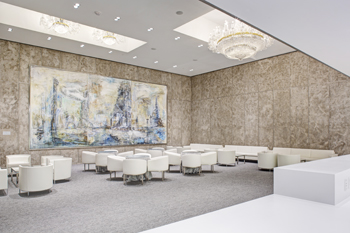 The Kennedy Center may be as American as apple pie, but its programming has a decidedly international flavor.

Russian billionaire Vladimir Potanin funded the Kennedy Center’s Russian Lounge, which is situated on the Box Tier of the Opera House and recently marked its first anniversary.

That’s no accident. The John F. Kennedy Center for the Performing Arts is a quasi-federal agency with a board appointed by the U.S. president and a congressional mandate stating that it should put on its stages the best in arts and culture and be reflective of the people of this country.

“Since America is a nation of immigrants, both willing and unwilling, it is incumbent upon us then to reflect those various cultures that are part of American heritage in the work that we do,” said Alicia Adams, the center’s vice president of international programming and dance. “Washington, I think, is a microcosm of this country in terms of the population and the various people of the world that are represented.”

Among the best examples of this commitment are the international festivals that the center hosts regularly — now every other year. For these, Adams works closely with foreign governments and embassies. Absent a Ministry of Culture in the country, she and her staff essentially assume that role, she said.

Earlier this year, for instance, “Iberian Suite: global arts remix” celebrated culture from the Portuguese- and Spanish-speaking world. Next year, the Embassy of Ireland is honoring the 1916 Rising, or Easter Rebellion, which led to the country’s independence, during “Celebrating a Century of Irish Arts and Culture!” at the Kennedy Center from May 16 to June 5, 2016.

“Outside of Ireland, there is no country in which this centenary will have a greater resonance than the United States,” said Claire Fitzgibbon, the embassy’s cultural attaché. “The U.S. is the only foreign country mentioned in the 1916 Proclamation; five of the seven signatories of that proclamation spent time in the United States that influenced their thinking and strengthened their resolve for freedom and independence; it has the greatest concentration of our diaspora; and the contemporary ties are of extraordinary depth and breadth. So we aim to have an appropriate celebration here in the U.S. as well as in Ireland, one that will honor and interrogate the 1916 legacy but also present the dynamic and multifaceted Ireland of today.” 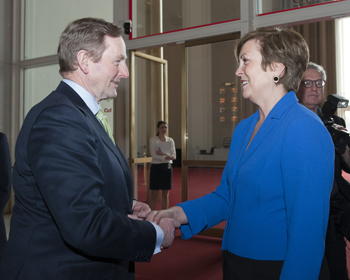 The festival here is the centerpiece of centenary celebrations that Ireland is planning around the United States, Fitzgibbon said, adding that she hopes it will further strengthen the U.S.-Irish bond.

“Our culture is one of our best calling cards,” she said. “It is through our culture that most Americans recognize Ireland and Irishness.”

And it is that role of unofficial ambassador that helps the center continue diplomacy through culture, even when political relations are strained. For instance, “Arabesque,” a festival with 800 artists from 22 countries in the Arab world, took place in 2009 despite hostility between Arab nations and the United States over issues such as the Afghan war, Guantanamo detention center and Israeli settlement building.

“I wasn’t even sure that the artists would come, but they wanted to come because they wanted to put a different face on that region of the world, that they’re not all terrorists, but there is a beauty and a humanity that is very much a part of their lives,” Adams said.

Similarly, despite the current rift between America and Russia — not to mention the fact that the center is named after a president who fought the Cold War — the Kennedy Center’s Russian Lounge recently marked its first anniversary. The lounge, situated on the Box Tier of the Opera House, was a gift by Russian billionaire entrepreneur Vladimir Potanin to celebrate the center’s long history of presenting Russian culture, including the Bolshoi Ballet and Mariinsky Theatre companies.

Still, the fact that a Russian oligarch footed the bill for a sleek, exclusive lounge in the heart of the American capital at a time of heightened Moscow-Washington tensions raised a few eyebrows. Potanin’s foundation announced the multimillion-dollar donation to the Kennedy Center at the end of 2011 — just before protests erupted against President Vladimir Putin — in part to show the world a different side of Russia. Three years later (behind schedule and over budget), the lounge quietly opened amid the fighting in Ukraine and Russia’s annexation of Crimea.

But Adams insists that the Russian Lounge, like all of the Kennedy Center’s international collaborations, is about cultural exchange, not politics. 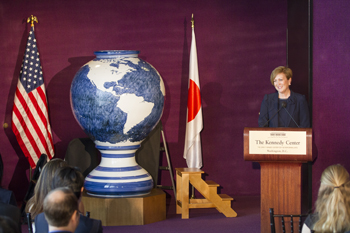 Kennedy Center President Deborah Rutter speaks at the May unveiling of the Blue Star of Life, a globe-shaped porcelain vase given to the center by Japan.

“One of the things that I think people sort of forget is that arts and culture have always continued even though there was the Cold War going on between Russia and the United States, even with Cuba, throughout all of these years,” Adams said. “Those things never stop because they are about the humanness of us and the need to continue to develop and progress and show our humanity through our arts and culture.”

On May 29 — President Kennedy’s birthday — Japan gave the center the Blue Star of Life, a globe-shaped porcelain vase, to display in the Terrace Theater lobby as a token of the relationship between the center and Japan. That bond dates to the center’s opening, when Japan gave it a 3,000-pound red-and-gold silk curtain for the Opera House stage. Since then, Japan has also provided funds to build the Terrace Theater in the 1970s, and in 2008, the Kennedy Center presented “Japan! culture + hyperculture,” a two-week festival that brought in 467 artists from 17 performing companies specializing in music, dance and theater.

All of this serves the center’s mission, Adams says.

“Washington is the seat of government for the United States, but it’s also the seat of power for America,” she said. “This is the intersection of arts and government and politics, so we have a very interesting context for presenting work.”