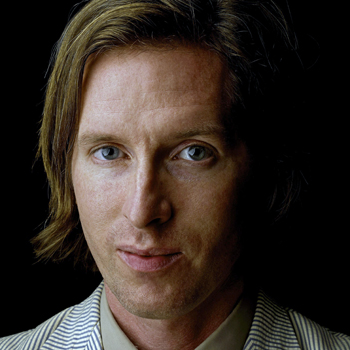 On March 10, during the 2014 South by Southwest (SXSW) Film Festival, the most desirable place to be in Austin was the 1,200-seat Paramount Theatre for the sole SXSW screening of American writer-director-producer Wes Anderson’s U.S.-German coproduction, “The Grand Budapest Hotel.” The big draw was an extended Q&A with the quirky visionary, a Houston native who attended the University of Texas at Austin.

It was definitely a homecoming of sorts for Anderson, who recalled that, “When Owen Wilson and I made our first film ‘Bottle Rocket’ many years ago, before most of you were born, we had a special sneak preview here [at the University of Texas], where I had once been a projectionist. I had really secretly lived for a short time in an attic above the balcony, which was filled with bats. After the sneak preview, we did a Q&A…. It was awkward because we risked outnumbering the audience.”

Times have changed. The Oscar-nominated director has become renowned for his distinctive, often quirky visual and narrative style, as seen in films such as “Moonrise Kingdom,” “The Darjeeling Limited,” “The Royal Tenenbaums” and “Rushmore.” His latest comedy-drama ensemble stars Ralph Fiennes as Gustave, a legendary concierge at a European hotel in the 1930s. Against the backdrop of looming war, the theft of a priceless Renaissance painting and the battle for an enormous family fortune, Gustave must do what it takes to maintain the decorum and high standards for which his hotel is famous (even if means sleeping with every guest in town).

“The Grand Budapest Hotel” marked the first time that Anderson, known for employing the same actors, worked with Fiennes, who the director said perfectly embodied the film’s resourceful, suave protagonist. “He’s English, and he’s not a hotel concierge, but everything else is like … Ralph,” Anderson said. “He talks that way, and it’s his personality.”

He added: “We wrote this part for him, and I’ve been dying to work with him. And I love Ralph. He can be funny, but he’s very formidable.

“I always pictured him as sort of a Shakespearean, and obviously he’s done that and can do that. But I think the great and exciting thing about working with him was that he’s really more like a method actor,” Anderson continued. “He really brings a real charge to the set.”

He also brings a distinguished pedigree, with award-winning turns in films such as “Schindler’s List” and “The English Patient.” But Fiennes also boasts a diverse repertoire, playing Lord Voldemort in the “Harry Potter” series and M in the latest James Bond installment. Anderson said he took to the role of Gustave quickly. 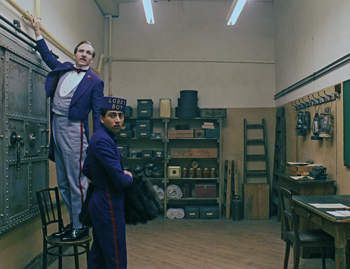 Ralph Fiennes, left, stars as a legendary concierge at a famous European hotel while Tony Revolori plays his trainee and trusted friend in “The Grand Budapest Hotel.”

“I don’t remember him having a lot of questions about the character,” the director said. “I think his thing was the character was the kind of character where someone could do a real turn with it, and he wanted to make him a real person. And that was what he was focused on.”

Anderson also strove for authenticity. “The whole movie was shot on location, really, in this town called Görlitz — that’s in Saxony,” he said. “Half the city’s in Germany, half in Poland — 20 minutes from the Czech Republic. We built sets on location…. We shot 75 percent of the movie within 12 minutes of this little hotel where we lived.”

“It was so wonderful being together,” Schwartzman recalled of the shooting. “A lot of the actors don’t have scenes together. It was so wonderful the way Wes set it up so that all the actors lived together in a hotel. I didn’t work with Jeff Goldblum, but I got to spend a lot of time with him. It felt like camp or something…. You’d walk out of your room, walk down the steps, turn the corner, and Jeff Goldblum is there. ‘Hi, what are you doing?’ ‘Nothing, what are you doing?’ ‘Let’s have a sandwich.’ And then eight hours later, I’m talking to him about acting. It’s a wonderful way to make a movie.

“The times that I’ve had with Wes are the greatest of my life,” Schwartzman added. “You just can’t believe the company that you’re in. Listening to stories, watching Ralph Fiennes talk to Jude Law…. The conversations, they’re just wonderful to listen to and overhear. You just get so much great information — it’s amazing.”

“We don’t pay the actors, but we have a very good cook that we bring in,” Anderson quipped. “And we all have grub together every night. That makes quite a significant difference.”