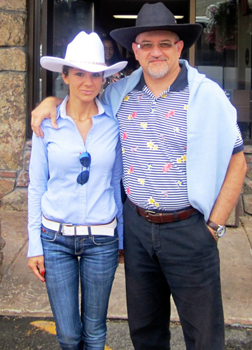 With a Ph.D. and a six-page resume, Aneta Spaic is an impressive academic, author and lawyer. She has also waded into the world of diplomacy by dating Montenegro’s ambassador, Srdjan Darmanovic, himself a first-time diplomat who is also a professor, political scientist, author and chess champion.

The two share a passion for learning — and teaching, which is what brought them together seven years ago.

“In high school I was a nerd,” admitted Spaic. “I missed the parties. I had been the best student in our high school and the best in physics.”

Aneta Spaic and Montenegrin Ambassador Srdjan Darmanovic have taken advantage of his D.C. posting to travel around the United States to places such as Yellowstone National Park as part of the State Department’s Experience America Program.

She won an invitation to attend the United World College of the Adriatic in Italy, which brings together students from around the world. “The best high school students were chosen from 70 countries. I had to change my way of thinking. I was used to being the best in my class and here I was with all these other students who were also used to being the best. It was a different psychology, state of mind, for me.”

But in 1999, as war raged in the Balkans, NATO had begun its bombing campaign against Serb (and Montenegrin) forces in response to the ethnic bloodletting in Kosovo. “Everything was very different,” Spaic recalled. “The country was bombed with no way of escape. I was only 18 and I was so afraid.”

By 2000, six years before Montenegro formally declared its independence, things were calm enough that Spaic could begin to study law at the University of Montenegro in Podgorica, now her country’s capital.

After graduating with top honors, she was invited to study for her master’s degree in law at Kyushu University in Japan. “That’s when I decided to study international economic and business law,” said Spaic, who then worked on her doctoral in international sales law back at the University of Montenegro between 2005 and 2009.

During that time, she also held various positions, among them interning in the Parliament and working for three different human rights organizations. She was also a teaching assistant at the Law School of the University of Montenegro.

More than a decade earlier, Darmanovic had been an MP in the Federal Parliament of the former Yugoslavia. Afterward, he founded the Centre for Democracy and Human Rights, an NGO, and he was an associate professor of comparative politics at the University of Montenegro, where he’d served as the founder and first dean of the university’s political science faculty.

Not surprisingly, the two met at the University of Montenegro. “We were in two different faculties, law and political science, but in the same building on different floors. We knew each other and would pass each other in the corridors. That was seven years ago,” said Spaic, who is 20 years younger than the ambassador.

“My family was worried about the 20-year difference in our ages — Srdjan is two years older than my mom! They are very conservative and traditional. Now, they love him so much,” she said.

Darmanovic was appointed Montenegro’s ambassador to the U.S. in late 2010 and after arriving in Washington, Spaic became a visiting scholar at American University and then an adjunct professor at Washington and Lee University’s School of Law, where she teaches each spring. In the fall, she returns to Podgorica as an adjunct professor at the University of Montenegro, where she is a faculty member of both the law and political science departments. 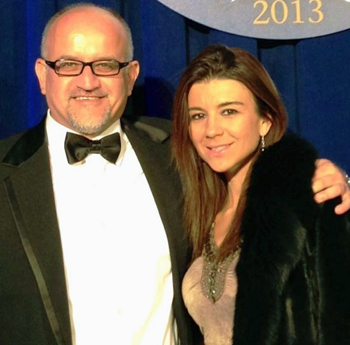 The couple — seen at President Obama’s 2013 Inauguration — met at the University of Montenegro, where he was an associate professor and she studied law.

“Srdjan is, in fact, very supportive of my teaching engagement in Montenegro. While I’m teaching in Montenegro, we are separated these four and a half months, but Srdjan comes to Europe and Montenegro at least once for that period, and as for now there have been no problems,” Spaic told us. “In the beginning, when I was a teaching assistant, I was crazy-demanding, but after some years I have become softer. I want to motivate my students.”

Spaic herself has plenty of motivation. Among her accolades, she was recognized as the best student at the University of Montenegro and was a laureate of the Montenegrin Academy of Science and Art. She has also published a number of articles and is the author of “Legal Aspects of Mitigating Risks in Project Finance.” She is currently working on another book — a law encyclopedia on economic and commercial law in Montenegro — while at the couple’s contemporary apartment in Northwest D.C.

Why was this 32-year-old assistant law professor so career-driven at such a young age? “My mom was 17 when she married — she didn’t have time to get fulfilled. She’s my best friend and I want to do it for her. Plus, I am tough on myself; I am very critical.”

Although much of her career has involved solitary research and study, Spaic says, “I have always liked to be around people. It’s the consequence of growing up in a big family. I have two brothers and one sister and we had our grandma with us. In a year my sister will become a lawyer. My older brother, who is two years younger than I am, has a café-restaurant, and my younger brother is only 17 and in high school,” Spaic said. “My father is a businessman, doing import and export. I can always remember having cheese and beer from Holland and coffee from Brazil.”

So does she want a large family too? “Three years ago I would have said that I didn’t want children,” she told us. “But everything is changing. Now I can imagine myself as a mom. I feel that I would not be complete without a child — one child.”

For now, she is trying to be a better diplomat for Montenegro. “In a way, I lack enough social intelligence. That’s not good for diplomacy. Maybe it’s not smart, but I always tell the truth to people. Sometimes it sounds harsh and I need to apologize and say, ‘Sorry, I didn’t mean that.’ But I believe my social intelligence is growing.”

In comparison, she said her longtime partner is a natural diplomat, even though this is Darmanovic’s first posting.

“He is a hard worker and does his homework. He takes a good analytical approach and is always doing something good for his country. He is very persuasive. He treats all people equally. That isn’t true of all of the ambassadors, especially of big countries,” Spaic said.

“Recently, he has organized the Montenegro Caucus in Congress. That is the best thing for Montenegro,” she added. “Having Americans with us will help us get full membership in NATO.” 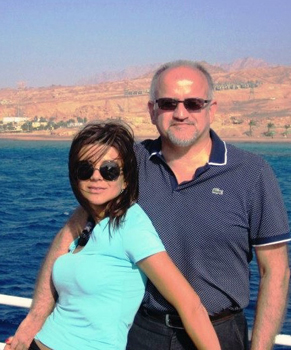 The ambassador possesses another skill set that no doubt helps him analyze a situation and plan a long-term strategy. “He is a master chess player. He plays in a D.C. league for the Black Knights team,” said Spaic. “He has made many nice friendships here through his beloved hobby. I think he loves chess first and me second! I am so jealous,” she said, laughing.

Spaic herself enjoys taking time off from work to relax, shop and travel. “We call the U.S. paradise for shopping. Here you can get such excellent deals — discounts you would never find in my country,” she said. “Of course, it’s not only about shopping. This is a very cultural city with so many marvelous museums, theaters, bookstores, galleries and restaurants. It’s also a very international city — what I so much like.”

Spaic and the ambassador have also enjoyed traveling around the United States to places such as Miami, Yellowstone National Park, Los Angeles, Maine and Puerto Rico. Recently, they have also visited Israel, Jordan, the Bahamas and the Dominican Republic.

Spaic also encourages Americans to visit her homeland, which was listed recently by American Airlines in its in-flight magazine as “The Jewel of the Adriatic.”

“It used to be a bargain,” she said of her young country. “Now, there are higher prices because of development, but we still have history, culture and many nice hotels.”

Montenegro, in fact, has fared relatively well since its independence less than a decade ago, with a per-capita income of nearly $12,000.

“We are the size of Connecticut and have 625,000 people — one-fourth of Walmart’s 2.2 million employees,” Spaic said. But she added that her tiny country packs a big punch.