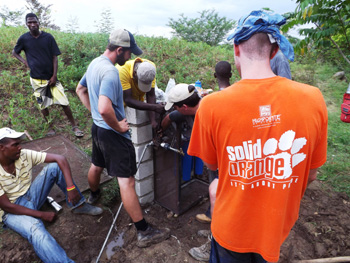 Six of this year’s winners focus on STEM studies in science, technology, engineering and math. Another winning program offers MBA degrees for working adults who find it difficult to travel because of job or family commitments. And one honoree has created a successful but rarely attempted study-abroad program for college freshmen.

The chosen projects are meant to be models that provide adoptable strategies for colleges and universities worldwide. The awards were presented as part of a best practices conference — held in New York City on March 14 — where the winners offered practical program descriptions to an audience of campus leaders and education professionals.

Here are some highlights of this year’s honorees and what they’re doing to revolutionize international education:

Students from the Clemson Engineers for Developing Countries program work with their Haitian counterparts to develop a municipal water filtration and distribution system in Haiti’s Central Plateau.

The study abroad winner is Clemson University’s Haiti Initiative fielded by the Clemson Engineers for Developing Countries (CEDC) program. A public science and engineering institution that offers more than 100 graduate degree programs, Clemson is located near the Blue Ridge Mountains in South Carolina.

Its study abroad director, Uttiyo Raychaudhuri, called CEDC’s Haiti Initiative “an innovative student-directed program that began as an applied engineering program, but now also integrates civic engagement and extends across disciplines to improve the quality of life and work toward a sustainable future for the village of Cange in Haiti’s Central Plateau,” he said, noting that the project has directly impacted over 10,000 Haitians and works with Zanmi Lasante, a local nongovernmental health-care provider.

“The program created its first service-learning experience in the fall of 2009 with seven civil engineering students, who focused on the design for a municipal water filtration and distribution system in Haiti’s Central Plateau,” Raychaudhuri explained.

“A few months later, a 7.0-magnitude earthquake hit Port-au-Prince. The devastation resulted in thousands of Haitians relocating to the Central Plateau. The surge in population, coupled with a subsequent outbreak of cholera, placed increased pressure on the student team to complete the water filtration system.”

As a result, CEDC branched out to form its first interdisciplinary collaboration with Clemson’s Department of Public Health Sciences and Biosystems Engineering.

Speaking at the New York City conference in March, Jennifer Ogle, an associate professor of civil engineering at Clemson, said that to date the Haiti Initiative has implemented $1.7 million in projects, including the largest municipal water system in the Central Plateau, which is “the first chlorinated system in all of Haiti.” Completed in 2012 with eight public fountains, it removes the need for the population of 3,500 to walk up a mountain to fetch all of their water.

The initiative is branching out into waste management, and students have developed a latrine system that cleans waste and produces methane gas as a byproduct, with the hope of using it as a local fuel source.

Funders for the initiative include the Episcopal Diocese of Upper South Carolina, students and industry partners. “One hundred percent of the money goes to projects, [which is] attractive to NGO partners,” Ogle noted.

The program is led mostly by students on the Clemson end, with help from industry and faculty partners, and has attracted 30 majors from all five Clemson colleges.

Students refine, research and propose solutions, then lab test them and work with the community on implementation, says Ogle. Student passion drives the program. They come up with the ideas and they are accountable for the results.

Two or three interns live in Haiti year round, and about a dozen travel there periodically, but the remainder of the 90 students meet weekly and interact with their peers in Haiti on a daily basis.

Ogle said Clemson has fully embraced the CEDC program, whose new slogan is: “We are serving the developing world and developing those who serve — our students.” 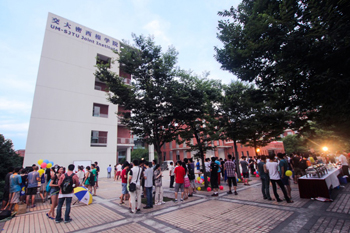 The University of Michigan and Shanghai Jiao Tong University in China have been collaborating since 2006 to run a common engineering curriculum.

Top honors in the international partnerships category went to a collaboration between the University of Michigan and Shanghai Jiao Tong University in China that dates to 2006 and runs a common engineering curriculum.

James Holloway, vice provost for global and engaged education at the University of Michigan in Ann Arbor, described the ties between the two educational institutions as one of “intellectual sharing” of ideas and resources, rather than financial ties.

The result, called the Joint Institute, is an engineering-oriented college within Jiao Tong University that is home to 20 tenure-track faculty members. Most enrollees are Chinese but the two engineering degrees are offered in English and the curriculum is similar to that at Ann Arbor.

One notable feature of the program is what developers call “student mobility.” Holloway said there is a “tremendous flow of people back and forth” between the U.S. and China, in part because the programs have a common curriculum and language (English). About 350 students come into the program in China annually, and about 100 transfer to Michigan each year to complete their degrees. So far, about 300 American students have gone to China during the summer to take engineering classes at the Joint Institute.

The program is successful, Holloway says, because the two contributors have complementary values. He explained that Chinese personnel get the opportunity to see up close how Michigan organizes a college, a faculty and staff, as well as the autonomy and responsibility that a U.S. assistant professor has. The College of Engineering at Michigan also has an honor code that serves as a model for the Joint Institute.

“For us, Michigan wanted a place to engage in China for our students; we wanted engineering students studying abroad. They usually don’t,” Holloway said. “We learned that leadership participation is important. Our president has stayed engaged, which doesn’t always happen.”

His final bit of advice: “Keep it simple. Do a few things very well.”

A partnership between Franklin University in Ohio and Wyzsza Szkola Bankowa (WSB) in Poland earned an honorable mention in this year’s international partnerships category.

WSB and Franklin both focus on working adults and entered into an academic partnership in 2008 with the initial aim of offering a master’s degree program in business administration to adult students living in Poland. But the relationship evolved into collaborative course designs and faculty exchanges.

“We are like-minded partners,” Doug Ross, associate dean of the Franklin Global MBA program, told the audience in New York City. “We’re both extremely entrepreneurial and fast moving, and we learned from each other.” He added that both schools are looking to serve the “huge market of individuals who need a different way to get their advanced degrees.”

The secrets to this transatlantic success story, according to Ross, in addition to having similar offerings and serving similar kinds of students, are location, communication and commitment to building a strong relationship with your partner school.

He noted that schools need to have key university officials at each location to get the resources they need. “Good communication is essential. We have ‘country coordinators’ who are in contact all the time,” he said.