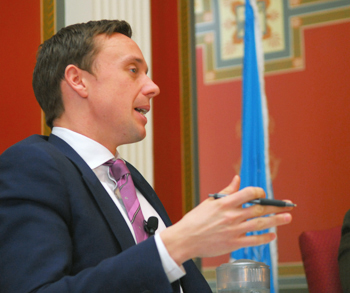 He’s only 33 years old but has already been described as “the best historian of his generation” by British Education Secretary Michael Gove. He’s published two books on his own and has co-edited and co-authored four more; the Wall Street Journal and Sunday Telegraph named his most recent volume, “Castlereagh: A Life,” one of the best books of 2011.

Meet Belfast-born John Bew, a foreign policy expert and historian who enjoys watching the Netflix series “House of Cards” in his spare time. (“Most Americans prefer the BBC version, but I prefer the American version,” he says. “I suppose it’s escapism.”)

Bew’s official title is reader in history and foreign policy at the War Studies Department of King’s College London, where he’s also director of the International Centre for the Study of Radicalisation and Political Violence. For the past seven months, he’s worn another hat as well: that of Henry A. Kissinger chair in foreign policy and international relations at the John W. Kluge Center, a division of the Library of Congress.

John Bew, who holds the Henry A. Kissinger chair in foreign policy and international relations at the John W. Kluge Center of the Library of Congress, speaks March 27 on “Realpolitik and American Exceptionalism” along with noted U.S. scholar Robert Kagan.

Bew is the 13th scholar to hold that distinguished position since the center’s establishment in 2000. He arrived here last October, in the midst of the federal government shutdown and bitter sniping between Democrats and Republicans.

Yet for all the talk about political gridlock, cynicism and hypocrisy, Bew says he likes Washington.

“It’s a very intellectual town,” he told us. “It’s like a liberal European city in some respects, with lots of bookshelves — a very reflective place, not quite the caricature that’s painted of it.”

Bew talked with The Washington Diplomat at length following a March 27 event at the Kluge Center on realpolitik and American exceptionalism. The seminar — in which Bew and fellow scholar Robert Kagan discussed how the United States positions itself globally in the 21st century — was the second in a three-part series titled “The Return of Realpolitik: A Window into the Soul of Anglo-American Foreign Policy.” A March 13 discussion examined America’s engagement with the Muslim Brotherhood since 1945, while on April 10, Bew talked about how realpolitik is ripe for rediscovery as it undergoes a renaissance in the English-speaking world.

The notion of realpolitik — that policies are formulated based more on practical geostrategic and national interests rather than lofty ideals — has experienced a resurgence of sorts as experts debate the Obama administration’s foreign policy in places like Syria, Ukraine, Egypt and elsewhere.

Bew is using his scholarship residence at the Kluge Center to examine the term in both the three-part lecture series that wrapped up last month and an upcoming history of Anglo-American realpolitik, to be published by Oxford University Press.

“My book will be the first on the concept of realpolitik in the English-speaking world: its origins as an idea; its practical application to statecraft; and its relevance to the foreign policy challenges facing the United States and its allies,” Bew explained.

It’s a topic that has long fascinated Bew, who did his undergraduate and master’s degrees at the University of Cambridge, as well as his doctoral thesis.

“I never expected to be a historian, but people presumed it was inevitable,” he told us, noting his father’s deep involvement in Irish politics. “Both my parents are historians, but that wasn’t really it. I think, in hindsight, that 9/11 was what kept me in academia. It sparked a greater interest in the world and foreign affairs — and also confirmed to me that ideas, knowledge and history mattered on the global stage.”

Growing up in Belfast, he said, “You get a sense of the resilience of history, and the grievances that have gone on for centuries.”

In fact, he said, people often think they’re living in a new era, watching as history is being made before their eyes.

“In October 1993, the Oslo Accords were signed, and people were talking about peace between Arabs and Israelis. That same month in Northern Ireland was one of the bloodiest and most horrific months ever,” Bew said.

“I was a teenager at the time,” he recalled, “and I remember people saying, ‘Why can’t you guys get along like the Arabs and Israelis?’ Five years later came the intifada — and the Northern Ireland peace accords.”

It was the tumultuous history of Ireland that gave rise to Bew’s first monograph, “The Glory of Being Britons: Civic Unionism in Nineteenth-Century Belfast.” That was followed the same year by “Talking to Terrorists: Making Peace in Northern Ireland and the Basque Country.”

“That book is a prime example of what I do, which is not to use history to offer simple lessons but to actually stress the importance of complexity and the messiness of history,” Bew said.

His most recent work is a 582-page account of the life of Irish aristocrat and British statesman Lord Castlereagh, who in the early 1800s dominated British politics. Bew’s deep interest in Irish issues serves as a backdrop to his larger overall study of realpolitik — a word he says is once again fashionable in Washington.

“It’s a term used by both scholars and practitioners in discussions of international affairs. Yet it is one of those words borrowed from another language that is much used but little understood,” he explained.

German in origin, realpolitik was first used in 1853 by the German revolutionary Ludwig August von Rochau, according to Bew, “to describe what he saw as a cynical and coercive form of domestic political statecraft.” In a modern context, realpolitik is the practice of diplomacy based primarily on power — and on practical and material considerations — rather than moral, ethical or utopian premises.

“Foreign policy has been a stick with which both parties have beaten each other over the last 10 years or so,” Bew said. “It’s been a real sore wound for a long time, but that’s partly because it was an argument over what America should do in the world.”

While at the Kluge Center, Bew is tapping the extensive collection of presidential papers and other research material at the Library of Congress to write his history of realpolitik. He describes the library’s manuscripts as among “the best resources in the world” and says he’s used the Kluge Center just about every day since his arrival in the United States.

“What’s really struck me since I’ve been here is the appetite for history to inform foreign policy” — and not just in Washington, he said. “I’ve been to Mississippi and Texas, too, and there’s been a real growth of grand strategy courses that are precisely about this, with the archetypal model [being] the one at Yale, which used to be a training school for diplomats and statesmen.”

With regard to foreign policy, Bew has found what he calls a “genuine plurality of voices and positions” on both sides of the aisle.

“A lot of shrill voices and sometimes silly things are said at the heat of the moment. But there are also deep reserves of intelligence, reflection and expertise,” he told us. “We seem to be entering a kind of managerial phase of foreign policy rather than a solutions-oriented approach, i.e., ‘We must stop genocide.’ This will require patience, but also a certain degree of fortitude.” 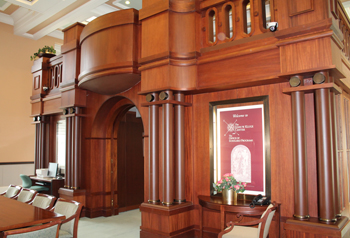 Photo: The John W. Kluge Center at the Library of Congress

The John W. Kluge Center at the Library of Congress brings together scholars and researchers from around the world to capitalize on the library’s wealth of resources and interact with policymakers and the public.

He added: “I don’t think people are ignoring suffering. We cannot ignore it. The question is, and has always been, what can we do about it? You can see that it’s a recurring dilemma in Western foreign policy. You could even see this dilemma among individuals in the Obama administration.”

For example, he said National Security Advisor Susan Rice “has been a very strong voice in the prevention of genocide,” while Defense Secretary Chuck Hagel “is much more skeptical about Washington’s role in solving the world’s problems.”

In an article published in the March-April 2014 issue of The National Interest, Bew explained why realpolitik is suddenly coming back into vogue.

“In the 1990s, some regarded realpolitik as a thing of the past — a relic of the Cold War and a ‘needs must’ approach to the world which could now be tossed into the dustbin of history. Even at the height of their influence, Western realpolitikers have often faced resistance and criticism from within their own societies. As a foreign import, lifted from the heart of the great Anglo-American bogeyman of the two world wars, the word does not sit comfortably alongside such soothing terms as ‘enlightenment,’ ‘morality’ and ‘virtue,’” he wrote. “In a world where great-power rivalries have returned, however, realpolitik is once more discovering a receptive audience. The chastening of American ambitions in the Middle East also allows realpolitikers to point out, with some justification, that idealism can lead to worse moral outcomes than the cool, circumspect approach to statecraft that they purport to employ.”

This theme is particularly timely given Russia’s recent annexation of Crimea, the Kremlin’s increasingly belligerent threats against Ukraine and Moldova (also see cover profile), and the way Obama has handled the situation. It was also a major topic during Bew’s well-attended discussion with Brookings scholar Kagan at the Kluge Center.

“There’s a Soviet aspect to this, but I don’t think this is a Cold War scenario,” Bew told us. “The reality is that nations pursue what they perceive to be in their interests. However, the whole question of national interest is such a controversial, ambiguous term. So [Russian President Vladimir] Putin has made a calculation that acting in this way is in Russia’s national interest.”

And, he adds, there may not be much Washington can do about it.

“History tells you that any time a powerful nation is seen to pull away from one region of the world in any form, what normally happens is another powerful nation fills the void,” he observed. “So while we’d like to have independent, flowering, peaceful democratic nations, that’s not always possible. The sad reality of power politics is that democratic nations sometimes need a guarantor. You can’t prevent every scenario.”

Bew is now at the end of his 10-month fellowship. The next Kissinger chair will arrive in October, following the recommendation of a selection committee made up of academics and foreign policy experts.

After a vacation to Nicaragua with his fiancée, Bew plans to return to King’s College London, where he’ll resume work on not only his upcoming history of realpolitik but also a biography of Clement Attlee, who was Great Britain’s prime minister from 1945 to 1951.

Given Washington’s culture of news-obsessed immediacy, we asked Bew if the latest headlines are really important in the long view of international politics.

“I think the way to approach these things is to be historically grounded, but not scared of being present-minded,” he replied. “It’s a bit of a dilemma for academics. If historians vacate the debate over foreign policy, then they can’t complain later if [decisions] are not informed by history.”