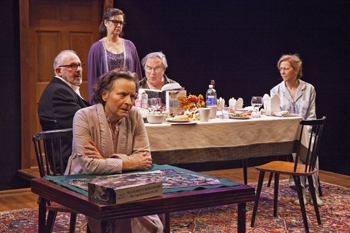 Richard Nelson’s “Sorry,” part of his “Apple Family Cycle,” portrays the family drama that ensues when baby-boomer siblings are forced to send their senile uncle to an assisted living facility.

The entire action of Richard Nelson’s “Apple Family Cycle” plays, currently at the Studio Theatre, unfolds around a meal in the same room. However, it is often hard to digest.

The four plays are meant to tie the intricacies of one family’s life into political topics of the day. While Nelson intended the series to be a “naturalistic dialogue” that gives “individuals’ voice to our political forum,” wrote Studio dramaturg Adrien-Alice Hansel, the plots often get caught in the cobwebs of depressing familial drama without much relief.

The circuitous story lines focus on the life struggles of the fictitious, liberal-leaning Apple family — baby-boomer siblings and their uncle in Rhinebeck, N.Y. — and each of the plays takes place during a significant political event.

Currently in repertoire at the Studio Theatre are the last two plays of the series: “Sorry,” which takes place at 5 a.m. on Election Day in 2012 during President Obama’s bruising re-election campaign, and “Regular Singing,” which takes place on the 50th anniversary of John F. Kennedy’s assassination.

In 2013, Studio mounted the first two installments of the four-play series: “That Hopey Changey Thing,” set on Election Day 2010, and “Sweet and Sad,” set on Sept. 11, 2011, a decade after the 9/11 attacks. First commissioned by the Public Theater, each play premiered on the night on which it was set.

Studio cast all four plays with the same actors, which lends a sense of consistency to the series, and the cast is made up of D.C. thespian favorites.

“Sorry” chronicles the sad day the family is scheduled to take their aging uncle to an assisted living facility, due to his increasing dementia. The uncle, Benjamin, is played by Ted van Griethuysen, perhaps the most skilled actor in the cast, and it’s unfortunate his character has so few lines. One of the most shining and uplifting moments comes at the end when Benjamin, a former actor, reads from a script that one of his nieces wants him to perform at the home’s talent show. His moving delivery reminds us that even those who are losing their senses remember at precious times who they really are and rise to the occasion.

In “Regular Singing,” the family is also in a state of crises, as Marian’s ex-husband is upstairs dying of cancer.

One of the harder parts to embody in “Sorry” is the character of Barbara, the oldest sister, portrayed by Sarah Marshall. Barbara is an unmarried schoolteacher who has carried the brunt of the burden caring for Benjamin. Although she is clearly bitter from being the target of Benjamin’s dementia and accompanying bursts of anger (he flinches when she tries to help him), she also feels guilty about putting him in a home. Marshall must walk the thin and realistic line of being strong yet vulnerable, and of loving someone but resenting them at the same time. 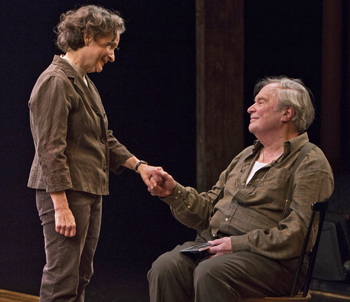 The other siblings round out a realistic aging family struggling to find happiness amongst their litany of heartbreaks. Elizabeth Pierotti plays Marian, the next oldest sister, who is also a schoolteacher. Divorced and the mother of a daughter who committed suicide, Marian is now enjoying the company of a new (albeit) Republican boyfriend. Kimberly Schraf plays Jane, the youngest sister, who is a writer and has come from Chicago to lend moral support. Lastly, Rick Foucheux portrays Richard, the only brother, who has just returned to the U.S. from a long overseas business trip.

All of the siblings have gathered at the upstate New York family home to lend Barbara and Marian moral support during the difficult task they must face of sending Benjamin away. While their act of solidarity is a clear indication of their underlying devotion to each other, their intermittent bickering and ribbing reveal typical family tensions like sibling rivalry, jealousy and just plain getting on each other’s nerves during a tough time.

One thing Nelson does well in these plays is making his audience relive political memories we might have well forgotten. In between the siblings’ personal revelations and trivial talk, they discuss politics, for it is Election Day, after all. During one poignant bit, they all fantasize about what they’d say to Obama, if given a moment of his attention. Marian graciously says (to Obama): “You’ve done your best.”

Throughout this discourse — as they skeptically question the significance of voting — the Apples remind us how Obama supporters were disappointed with his track record at the time. Jane weakly offers that voting is like recycling: You know at the time it might not make much of a difference, but you feel good when you drop a plastic bottle into the recycling bin, just like when you pull that lever at the ballot box.

For better or worse, for Democrat or Republican, the Apple family sticks together. And through their doubting optimism, it gives us, the audience, guarded hope in this current era of political unknowns.