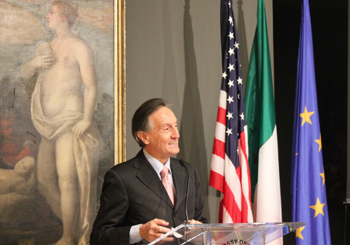 “I don’t see how an ambassador can operate effectively in the 21st century without social media support,” Italian Ambassador Claudio Bisogniero said in his introduction to “Beyond Social Media: The Role of Data Visualization, E-Learning and Digital Mapping in Diplomacy,” the latest event hosted by the Italian Embassy as part of its Digital Diplomacy Series.

Italian Ambassador Claudio Bisogniero welcomes guests to “Beyond Social Media: The Role of Data Visualization, E-Learning and Digital Mapping in Diplomacy,” a discussion held at the Italian Embassy as part of its Digital Diplomacy Series.

The Nov. 2 event was co-hosted by TechChange, which provides online courses in technology and social change, and featured a refreshingly all-female panel that included Sarah Frostenson of Vox Media; Heba Ghannam of UNICEF; Sarah Heck with the White House; Suzanne Philion from Yahoo!; and Jennifer Walsh of the State Department. (To understand how truly unusual an all-women panel is, particularly in Washington, check out this insightful satirical blog that documents the abundance of all-male panels at http://allmalepanels.tumblr.com.)

“While preserving its traditional roots and policies, diplomacy is changing, very deeply and very profoundly,” Bisogniero said. “We need not only to embrace that technology and innovation, but really to understand their role in what we do and how we relate to all players.”

That issue of relating, and general relativity, has been on my mind over the past several years as I’ve covered digital diplomacy. There’s no question that digital tools help people connect and interact online, but can they replace old-fashioned face-to-face engagement altogether in certain settings? Digital diplomacy events, in particular, seem ripe for testing such a theory.

To attend a digital diplomacy event, one must first either receive an invitation, usually via email, or notice a public listing, often on Facebook, Twitter, Eventbrite or, in this case, Meetup, a local language group. Attendees then RSVP, usually through various digital platforms, and tweet, like or share their enthusiasm about the event — ideally before, during and after — to increase its social media exposure.

Of course, the attendance portion still typically requires a person to be physically present, unless the event is live-streamed on TV or the web. Years ago, attendees might handwrite thank you notes to the hosts, although these days, even such manners made easier by email seem to have fallen by the wayside. Attendees are then knowingly or unknowingly added to an email distribution list and, in some cases, encouraged to watch a recording of the event afterward, to further appreciate any nuances they might have missed while they were half paying attention to the speakers and their phones simultaneously. 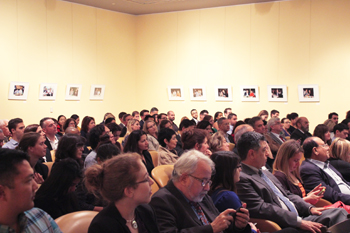 I was prepared to do all of the above for Italian Embassy discussion. I had even charged my phone and brought an additional charge pack, as these events often have too many demands on too few power outlets. My day was then derailed by a meeting that ran long and I found myself still across town when the panel began.

In a previous era, that might have been the end of the story. But in a world of instant access, I was able to follow the event via Twitter while simultaneously chatting with a colleague. Then later in the week, I watched the video on YouTube. I had access to the same information and insight from the speakers as those in attendance, even though I undoubtedly missed out on the embassy’s excellent pizza afterward.

I also missed out on a networking opportunity and the sort of personal conversations that arise by sitting next to someone with a shared interest. But by following the discussion on Twitter, I was able to digest a condensed version, along with instantaneous commentary on the speakers’ remarks. And by watching the video later, I was able to fast-forward through the less-than-scintillating bits of the Q&A segment, saved myself a cab ride in rush hour, skipped the calories of the pizza reception and was able to engage more fully in my previous meeting, without rushing out mid-conversation.

I will never truly know what I missed out on by not attending in person, and whether I would have met my next source or picked up a scoop for a new article. There’s also the sheer pleasure of being physically present at an intellectual gathering.

As a result, the digital experience may never quite match up to the physical one. But as Ambassador Bisogniero pointed out, effective diplomacy is underpinned by “social media support” — the emphasis being on the word support. Digital tools supported my inability to be there in person, but didn’t replace the experience altogether.