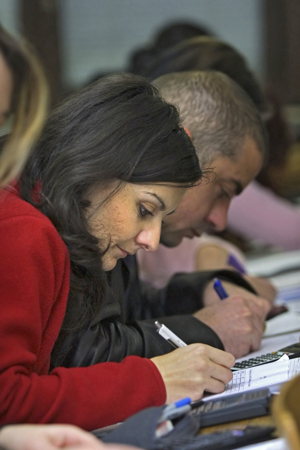 The rising tide of international students coming to the United States hit a record high of nearly 1 million students during the 2014-15 academic year — the biggest growth rate in 35 years, according to an annual accounting from the Institute of International Education’s “Open Doors” project and the U.S. State Department.

The influx is not only potentially generating a massive number of internationally savvy graduates, it has already pumped $30.5 billion into the U.S. economy, adding nearly 375,000 jobs here, said experts at the Association of International Educators (NAFSA) who analyzed the “Open Doors” data.

The United States is the number-one study abroad destination in the world and hosts nearly double the number of students than the United Kingdom, the country currently in second place. Australia and Canada rank third and fourth.

Quality accounts for America’s popularity, but so does capacity. The U.S. has 4,000 institutions of higher education, more than any other nation.

Another aspect of the impetus driving the study abroad surge is economic incentive. “Studying abroad is one of the best ways undergraduate and graduate students gain the international experience necessary to succeed in today’s global workforce,” said Institute of International Education (IIE) President Allan E. Goodman. “And studying in another country prepares students to be real contributors to working across borders to address key issues in the world we share.”

European Commission research published last year underscores that assertion: When experts looked at European Union students in a study-abroad program called Erasmus, they found that graduates with international experience fared much better in the job market. Additionally, five years after graduation, their unemployment rate was 23 percent lower than students who didn’t have international experience. The research covered 80 000 participating companies and students.

The Erasmus message is clear: “If you study or train abroad, you are more likely to increase your job prospects,” said Androulla Vassiliou, the former European commissioner for education, culture, multilingualism and youth.

U.S. officials agree that an international background is key to future business success, even for small, local enterprises. Mohamed Abdel-Kader, deputy assistant secretary for international and foreign language education at the State Department, recently blogged that, “It simply isn’t sufficient for a small business owner to have a basic understanding of accounting and management. Increasingly, she must think about where her product is sourced, the competition from overseas, and whether or not she can communicate across borders with suppliers who may not speak her language.”

That message has resonated with governments across the globe. IIE attributes much of the recent jump in students studying abroad to economic awareness among government officials worldwide. For example, the European Commission plans to offer Erasmus grants to 4 million people through 2020. Other governments are following suit.

According to IIE, the large increase in students coming to the U.S. from Brazil, Kuwait and Saudi Arabia has been fueled by governments “investing heavily in international scholarships for their students, sending tens of thousands of them abroad to develop a globally competent workforce.”

Latin America and the Caribbean accounted for the fastest-growing region of origin for international students in the U.S. this year, increasing by 19 percent over the previous year. Students coming from Brazil alone rose 78 percent to nearly 24,000. This upswing was supported by 100,000 Strong in the Americas, a public-private partnership, and by other initiatives launched by governments in the region.

Despite the growth from countries like Brazil and Saudi Arabia, one constant remain unchanged: The single nation sending the most students to the United States is still China, which sent nearly 305,000 students, or nearly a third of the international total here, a spike of 11 percent.

Notably, however, India saw a record-breaking rise of nearly 30 percent, taking second place for the number of students enrolled in U.S. schools. India’s increase marked the highest rate of growth in the history of the “Open Doors” project — a span of over 60 years — and Indian students alone contributed $3.6 billion to the U.S. economy.

Other countries in the top 25 places of origin ranged from third-place South Korea, which sent over 63,000 students; to Saudi Arabia, which landed in fourth with nearly 60,000 students; all the way down to number 25, Spain, which had just over 6,100 students studying here. In between were, in descending order, Canada, Brazil, Taiwan, Japan, Vietnam, Mexico, Iran and Britain.

Notable increases were seen in Mexico, up 15.4 percent; Nigeria, up nearly 20 percent; and Kuwait, up 24 percent. Nigeria also ranked among the fastest-growing international student populations in the United States.

Locally, the largest university and college enrollments came from China. However, while students from India made up the second-largest international student groups in Virginia and Maryland, they were third in the District of Columbia, where they followed students from Saudi Arabia. Saudis were the third-largest group of students in Virginia schools and ranked fourth in size in Maryland institutions of higher education.

On the surface, the boom in international students appears to be a boon for U.S. colleges and universities. But an analysis of the “Open Doors” data conducted by the Chronicle of Higher Education in November notes that the positive impact has been uneven, with overseas students disproportionately pouring into certain institutions while other campuses get left behind.

But glaring disparities remain. The Chronicle analysis found that just 10 percent of colleges accounted for nearly 70 percent of the current growth. These institutions have made a concerted effort to recruit foreign students, in part to boost their bottom line in the wake of skyrocketing tuition costs, falling domestic enrollment and state budget cuts.

Case in point: The fastest-growing major institution in the Chronicle study, Northeastern, enrolled 3.5 of every 1,000 foreign students coming here 10 years ago. This year it enrolled close to 11 of every 1,000.

“In this Northeastern has something in common with two of the other institutions that have seen the largest gains in market share, Arizona State University (No.2) and New York University (No. 4). All three have aggressive, entrepreneurial leaders determined to brand their institution a ‘global university,”’ Fischer wrote.

But such recruitment strategies have their flaws. For one thing, they could make institutions overly dependent on foreign student money. For those colleges that can’t compete, they risk getting left behind. Meanwhile, the increasing concentration of international students into a few institutions reduces the diversity of their academic choices while also robbing many American students of the chance to experience an internationally mixed campus.

The Atlantic’s Laura McKenna also raised the issue of educational diversity in a Nov. 18 article titled “The Globalization of America’s Colleges.” She pointed out that two out of three international students in the U.S. are funded by families who pay high out-of-state tuition at public institutions or costly private schooling up front, often with cash.

A U.S. education is “the most expensive in the world,” she wrote. A year at New York University, for instance, runs more than $66,000. According to collegedata.com, attending even a moderately priced U.S. institution can can cost $25,000 to $50,000 annually to cover tuition, fees, living expenses and books.

Only the very wealthy can afford to foot the total bill for such expenses and critics question the impact and propriety of America’s higher education system courting global elites, perhaps at the expense of poor- and middle-class American students by squeezing them out.

While pitfalls in the system need to be addressed, the general trend is undeniable and, possibly, irreversible. As Goodman noted in the Atlantic article, “The world has discovered America.”