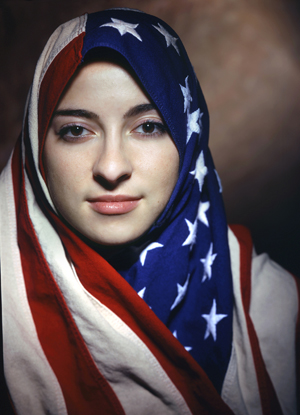 Boushra Almutawakel’s series “The Hijab” is among the works in “She Who Tells a Story.”

Powerful and provocative, the new photography exhibition “She Who Tells a Story” highlights the work of 12 contemporary women artists from Iran and the Arab world as they explore the personal and the political.

With over 80 works on display aimed squarely at challenging stereotypes and showcasing the struggles and levity in everyday life, the National Museum of Women in the Arts (NMWA) exhibition lives up to its title. This is the fourth venue for the show, which takes its name from the Arabic word rawiya, meaning “she who tells a story.”

The NMWA’s chief curator Kathryn Wat said she was excited to bring the exhibition to D.C. since “She Who Tells a Story: Women Photographers from Iran and the Arab World” has proven to have “a real resonance with an American audience.” Wat told The Washington Diplomat the exhibition is an “excellent” choice for the region given that D.C. is the diplomatic capital of the nation and the show places a lens on women artists who are often unseen in the United States.

“It’s a great opportunity for audiences to learn about their work,” Wat said. “The one thing that’s so cool about the photographs is they’re all incredibly poetic. There’s wonderful poetry and nuance to the images, even if they’re gritty.”

Some pieces strike a far too obvious note — theatrically staged images from Gohar Dashti’s “Today’s Life and War” series, for instance, don’t leave much room for ambiguity — but there’s plenty of subtlety to be found elsewhere. Several series give viewers electrifying glimpses into seemingly mundane scenes, whether it’s on a Cairo subway in Rana El Nemr’s series “The Metro” or in Gaza in Tanya Habjouqa’s pieces catching women taking selfies or going on boat rides. 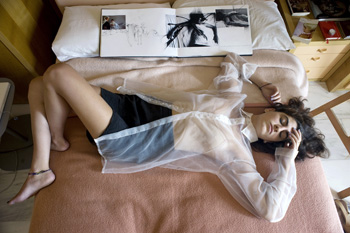 Rania Matar’s “Reem, Doha, Lebanon” from the series “A Girl and Her Room”

Then there are the wry, deftly done pieces from Shadi Ghadirian’s “Qajar” group, appearing on quick glance to be typical 19th-century studio portraits before revealing their contemporary nature thanks to props like a Pepsi can, boom box and pair of hipster sunglasses. Not just clever pastiches, but political commentaries on the restrictions that dominate life in Iran, Ghadirian’s pieces are among the standouts of the show.

Another stunning set of images comes at the end of the exhibition, in Newsha Tavakolian’s “Listen” series. Highlighting female singers who are not permitted to record music in Iran because of Islamic tenets, Tavakolian’s pictures create imaginary album covers for records that can’t exist. Beautiful, haunting and uncompromising, the images leave you wishing you could really buy a copy on vinyl. In one, a woman sporting red boxing gloves stares forcefully at the viewer on a road in Tehran. She appears again on a different fictional album cover, standing in the ocean as waves crash around her.

This effective section also features videos of the women singers — muted. It’s an emotive end to the show, and one that lets viewers linger on the many layers of the well-chosen title. 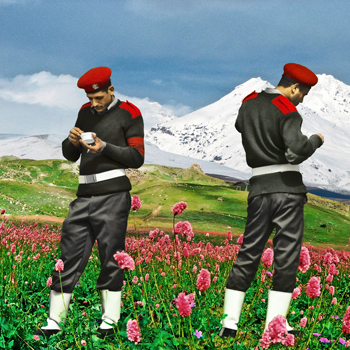 Nermine Hammam’s “The Break” from the series “Cairo Year One: Upekkha.”

From fine art to photojournalism to the blurred lines between the two, “She Who Tells a Story” encourages viewers to challenge their ideas about the genre of photography and about life in Iran and the Arab world, Wat said.

“Most of us know the Middle East region through documentary photography,” she noted. “But these images are very expressive.”

And, as Wat pointed out, women have been involved in photography since its invention in the 19th century — and this show explores just the latest way women are making a stunning impact on the field. In the Middle East, Wat said, it is female photographers who are at the absolute forefront of innovation and artistry, as visitors to the NMWA show will be able to see.

The groundbreaking artists in the show are exploring identity, confronting widely held notions about Iranian and Arab women and helping to show the way women photographers resonate worldwide.


She Who Tells a Story: Women Photographers from Iran and the Arab World