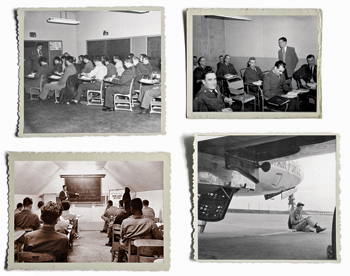 The images and memories from late April 1975 in Saigon — now Ho Chi Minh City — are indelibly etched in many of our minds. An American helicopter, its rotors spinning, hovers just above a rooftop as it picks up a dozen of the long line of men, women and children waiting on a stairway, desperate to leave the capital of then South Vietnam.

The North Vietnamese had shelled the airport serving Saigon a few days earlier, making mass evacuations by plane impossible. The U.S. Armed Forces Network (AFN) played Bing Crosby’s “White Christmas” and aired a message that Americans — and Vietnamese who had cooperated with the Americans — recognized as a signal that it was time to go. The city was beyond tense. As AFN said in its message, the temperature was 105 degrees and rising.

Out of camera range and beyond the airwaves, one aspect of life in South Vietnam was continuing almost as normal: The American service members who had remained in South Vietnam after the U.S. pullout two years earlier and embassy staff were taking notes and listening to lectures in University of Maryland University College (UMUC) classrooms. Eventually, they had to interrupt their studies and flee with everyone else.

Created in 1947 to provide university educations for the untold numbers of service members returning from World War II, including “battlefield commissions” — soldiers promoted to the rank of officer in the heat of World War II — who were threatened with demotion as the U.S. military cut back after the war ended, UMUC first sent faculty out to teach in the Washington, D.C., region, deploying teachers to the Pentagon, Bolling Air Force Base, Fort Meade, Md., and wherever service members were seeking an education.

Then, in 1949, the NATO military alliance was formed and many of the battlefield commissions who were working toward their degrees were poised to be sent back overseas.

“That meant they would have to desert their educational programs, so they petitioned for their programs to be brought overseas with them,” John Golembe, a 30-year veteran of UMUC’s European division, told The Washington Diplomat at an April reunion in College Park, Md., of the Overseas Marylanders Association, a grouping of former UMUC faculty and staff.

“The military quickly put out an order asking if there was anyone who could do this, and only Maryland responded. In the fall of 1949 they sent seven professors from the university overseas, expecting there would be about 600 students. On the first night, there were nearly 2,000, scattered at six different locations,” he said. 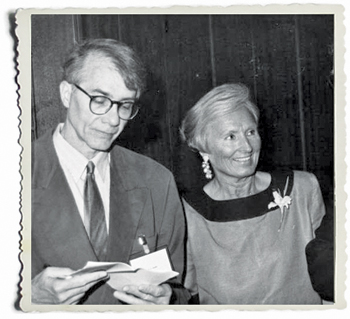 Joe Arden, who taught for the University of Maryland University College, left, is pictured in Heidelberg, Germany, in 1989.

Over time, the program has expanded to reach hundreds of sites around the world. Today, UMUC is a leader in global education, enrolling more students worldwide in 2014 than any other four-year, degree-granting public university in the United States. Last year, the institution, which is part of the University of Maryland system, had nearly 250,000 worldwide online course enrollments. Its overseas divisions offered on-site classes in more than 20 countries and territories throughout the world, enrolling almost 11,000 individual students in undergraduate and graduate programs in Asia and Europe (also see “Maryland’s UMUC Leads the Way in International Online Education” in the October 2015 education issue of The Washington Diplomat).

While UMUC is considered a pioneer in online learning, its face-to-face instruction of American military members formed the backbone of its international growth. When Golembe began working for UMUC in 1978, the university’s European program had a footprint in 200 locations — from Iceland in the north, to the eastern border of Germany, to Sicily and Turkey in the south. By the early 1990s, just before the fall of the Berlin Wall, there were 50,000 unique students in Europe alone in one year, Golembe said.

And that was before the ubiquity of the internet. UMUC overseas courses were taught in person by resident faculty in classrooms. Professors held office hours, just as they would on a college campus back in the United States. But unlike traditional universities, UMUC terms lasted eight weeks “because with the military you can never be sure when they’re going to get up and depart or go out on a movement or operation,” Golembe said. And rather than teaching in one place, faculty traveled from U.S. base to U.S. base, never knowing until weeks before they were due to leave where they would be spending the next eight weeks. This earned them the nickname of “gypsy scholars” or “academic foreign legion,” both of which they still claim with pride.

The itinerant lifestyle was unfathomable to some onlookers, former faculty member Sharon Hudgins, who with her husband Tom taught for 20 years in Asia and Europe, said in an interview published in UMUC’s annual Achiever magazine.

“Our German friends could never understand that legitimate American professors would be sent to teach university courses on military bases overseas and also move to a different base and even a different country every eight weeks,” Hudgins said. “They thought we worked for the CIA and UMUC was our cover.” 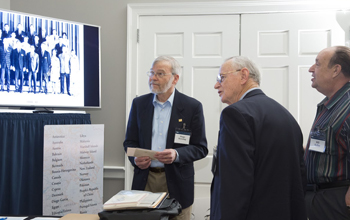 Bruce Janoff was hired to work for UMUC straight out of graduate school in 1972. He shipped out to Asia and taught U.S. troops in Vietnam, Thailand, Japan, Korea, Okinawa and the Philippines.

In his first academic year at UMUC, Joe Arden taught in Korea for the first term, in Vietnam for the second, and then in Thailand, Taiwan and northern Japan for one term each. “I was 26 or something. I thought there was some mistake — I should’ve been paying Maryland but Maryland was paying me,” Arden mused.

Faculty members had to know how to deal with a foreign culture, be independent, self-reliant, resourceful and able to find their next posting, no matter how remote the outpost they were being sent to, said former UMUC faculty recruiter Rosemary Hoffmann.

They also had to be prepared to accept the rigidity and discipline of life on a military base, where rules were enforced to the letter, said Julian Jones, who also spent part of his time at UMUC recruiting faculty members.

But the military did not interfere in the classroom, said Jones. “I taught courses on war. I’m not a proponent of war but no one ever intervened and said, ‘You can’t teach this,’” he explained.

Just as UMUC faculty are not cut from the traditional teacher mold, neither are the university’s students, like Navy veteran Rachel Shannon.

Shannon knew she “didn’t want to go straight down the college factory road” when she finished high school.

“I wanted to travel, I wanted to be a service member. I also knew that until I figured out what I like doing, it didn’t make sense for me to do a degree,” she told The Washington Diplomat. 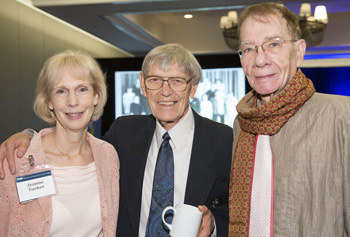 From left, Jeanne Tucker, Irving Tucker and Joe Arden attend an April reunion in College Park, Md., of the Overseas Marylanders Association, a grouping of former University of Maryland University College (UMUC) faculty and staff. Arden had been with UMUC since 1967, serving as director of the European Division from 1981 to 1996.

Shannon started her first bachelor’s degree, in social sciences, in 1998 and finished it in 2011. She expects to graduate next year with a second UMUC bachelor’s degree under her belt, in psychology. She did her studies for that degree when she lived in Belgium recently with her husband, also a military veteran.

“I was able to take courses both around my active military service member schedule — I was stationed in Spain and flying to different countries all the time — and later, as a spouse of a veteran, a veteran myself and a mother, I was able to take classes that worked around my schedule,” she said.

Shannon is part of a unique club of UMUC graduates that includes retired Army Lt. Gen. Emmett Paige Jr., who was the first African American to reach flag rank in the 116-year history of the Signal Corps; Voice of America executive producer and host Saman Arbabi; and Mary Rakow Tanner, deputy director of the National Zoo.

Although many UMUC courses are now available online, the university still sends faculty members to teach U.S. troops deployed overseas in places like Kosovo, Kuwait, Afghanistan and Iraq, as well as U.S. Marines and staff at embassies around the world. The faculty is just as dedicated to the students as the students are to their studies: A UMUC teacher once followed his students into the desert in Kuwait so that they would not miss class while out on a training exercise.

“When we say the military is in our DNA, we mean it. It’s been a part of UMUC from the very beginning. We hold this commitment very dearly,” said Rob Ludwig, assistant vice president of media relations for the university.

“UMUC has been remarkably successful in taking educational opportunities of a major American university around the world,” added Arden, a former teacher and director who although retired — as many of the faculty at the reunion were — still cares deeply about the thousands of students around the world who turn to UMUC for an education, and the hundreds of teachers and administrators who provide it.

In fact, a few years after the fall (or liberation, depending on how you look at it) of Saigon, Arden was director of UMUC’s Asia Program. “We received a postcard one day from Malaysia, addressed simply to the University of Maryland, American Embassy, Tokyo, Japan,” he told The Washington Diplomat. “The postcard was from an ethnic Vietnamese who had been teaching math with us that last term in Vietnam. He explained in the postcard that he and his family had been able to get out of Vietnam as boat people and they’d made it to Malaysia, and could we do anything to help them. We did, of course.” The math teacher and his family eventually came to the United States, Arden said.

As for the students whose classes were interrupted when the North Vietnamese closed in on Saigon, Arden was tasked several years later with deciding what to do with all of their “incompletes.” He gave the students the option to either finish the course or have their tuition refunded.