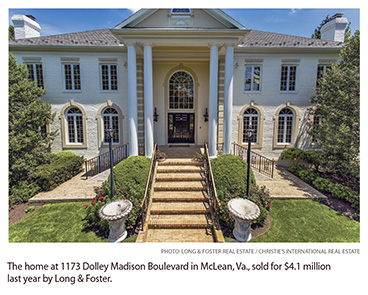 Overall sales increased by about 3 percent in 2017, while luxury home sales jumped 18.7 percent, compared to 2016, according to the 2017 Capital Region Market Report. But those numbers are a little misleading, cautioned Jeff Detwiler, president and chief executive officer of Long & Foster Companies.

The report breaks the market down into three categories: units costing $1 million to $2 million, $2 million to $5 million, and $5 million or more. Sales grew by 17.9 percent, 24.2 percent and 50 percent, respectively, for each group, the report found.

It’s in those breakdowns that the percentages become tricky, however. For example, in the highest category, the number of units sold went from 18 in 2016 to 27 last year, accounting for the large jump. Today, 75 homes in the entire region are priced at more than $5 million, Detwiler said. While that means D.C. boasts a fair amount of high-end homes that are selling quite well, the city still doesn’t have the ultra-pricey real estate found in other big-city markets. 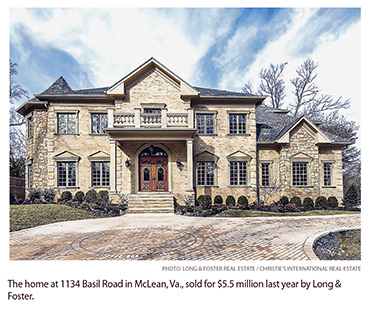 “It’s known nationally as a luxury market. There are very high percentages of the homes in many areas that are of a luxury price — what we see as the price point for luxury — but D.C. doesn’t have the super high-end sales like New York does, like Miami does, like San Francisco or L.A. do,” he said. One reason for that may be that Washington-area residents are not flashy about their wealth, he noted. The city also doesn’t have as large a population as other urban areas.

Meanwhile, home inventory was relatively tight during the past year and is predicted to remain low throughout 2018, although it did grow from previous years. After holding steady between 2013 and 2015 at about 240 units, inventory increased in 2016 to 285 and again in 2017 to 338. Overall, the number of units sold rose 28.4 percent in 2017, compared to 2016, and the average monthly inventory grew by 18.6 percent.

Prominent D.C. neighborhoods, based on active listings of at least $1 million, include Spring Valley at 92 percent, Kent at 87 percent, Georgetown at 65 percent, West End at 61 percent and Chevy Chase at 36 percent. 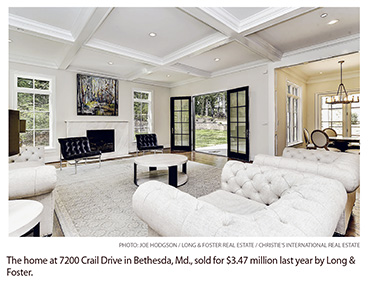 Spring Valley topped the list in 2016, too, but at 59.9 percent. One reason for the leap there is likely renovation and reconstruction, Detwiler said.

“There are two kinds of buyers. There’s the buyer that wants to buy the home and live in the home, and then a lot of our luxury product is being bought by individuals or groups with the intention of renovating and putting it back on the market,” he said. “The end buyer who’s going to live in the home wants new. They want all of the amenities of a new home, but they love the charm and character of the older communities and the unique look of the outside of these homes.”

Missing from the list of prominent neighborhoods this year is Kalorama, which got a lot of attention in 2017 as the Obamas and Ivanka Trump and Jared Kushner settled in there. In 2016, it took second place on the prominent luxury neighborhood list with 48.7 percent of active listings. Although it’s still very much a luxury market, there weren’t enough transactions in Kalorama in 2017 to earn it a spot on the list, Detwiler said. The median sale price in the neighborhood fell to $483,551 in 2017, compared to $496,950 in 2016.

Beyond the District, prominent luxury neighborhoods in Virginia are Great Falls at 65 percent of active listings priced at $1 million or more; McLean at 53 percent; Vienna at 34 percent; Arlington at 20 percent; and Alexandria at 11 percent. The number of luxury units sold in Northern Virginia jumped by nearly 17 percent in 2017 compared to 2016. 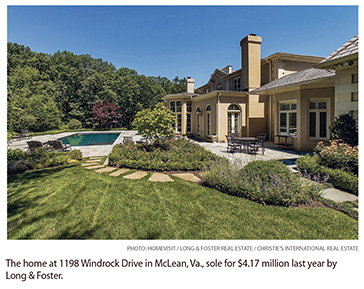 In Maryland’s affluent Montgomery County, the neighborhoods are Potomac at 54 percent; Bethesda at 47 percent; Cabin John at 46 percent; and Chevy Chase at 45 percent. The number of luxury units sold here grew by 10.7 percent.

“It’s a confirmation of some of the trends that we’ve continued to see,” Detwiler said. “There’s a continued migration from suburban areas — the one-time aspirational destinations — and it’s moving in closer to the city.” One driver of this shift is empty-nesters looking for a more walkable, convenient lifestyle. For instance, Detwiler said he’s seeing Great Falls residents relocating to McLean or the District itself.

The report states that 2018 will likely mirror 2017, but Detwiler said inventory is dropping off. “Although it’s only 70 days into it, we see the luxury market has slowed considerably from how we saw it finish at the end of the year. It’s too early to make any kind of big predictions,” he said.

He cites two reasons for the change. One is that interest rates are rising, making it more expensive to own a luxury home. The other relates to the tax reform bill President Trump signed into law at the end of 2017. It “was not particularly advantageous to homeownership,” Detwiler said. “You take the demographics of the group buying in this price range, I think there’s a little pause to re-evaluate whether to move or not.”

Long & Foster and Christie’s base the report on data from the Metropolitan Regional Information Systems and the National Association of Realtors.