Come April 19, Cuba — for the first time in nearly six decades — will be led by a man whose last name isn’t Castro.

The historic transition, in which 86-year-old Raúl Castro is expected to turn the reins of power over to Miguel Mario Díaz-Canel Bermudez, 57, comes as no surprise. It’s been in the works ever since 2013, when Raúl announced upon his re-election as president that his second five-year term would be his last.

In fact, Raúl was supposed to have stepped down on Feb. 24, when elections to Cuba’s rubber-stamp National Assembly were scheduled. But parliament delayed the move until mid-April to allow Cuba to recover from Hurricane Irma, which devastated much of the island last September.

Raúl, the younger brother of Fidel Castro, has led Cuba since 2006 and is to remain head of the country’s ruling Communist Party even after he steps down.

Díaz-Canel, now Cuba’s first vice president, will likely assume power as the island’s relations with the United States under the Trump administration deteriorate to their lowest level in more than 40 years. A mysterious “sonic attack” last year that allegedly sickened at least 20 U.S. diplomats stationed in Havana led to the expulsion of 15 officials at the Cuban Embassy in Washington — even though no evidence or details about the alleged acoustic incidents were ever revealed, and the entire affair remains shrouded in mystery.

Published reports indicate that investigators believed sonic devices that produce non-audible sound were placed in or near the residences of several U.S. Embassy officials with the intent of deafening them. Some observers believe the devices may have been installed by a third country such as Russia.

On March 2, former Secretary of State Rex Tillerson announced that the staffing cutbacks at the U.S. Embassy in Havana and the closing of the embassy’s consular section would be made permanent. William LeoGrande, a professor of government at American University, said this “downward spiral” has damaged the interests of both countries.

“Going forward, the U.S. diplomatic presence in Cuba will be weaker than at any time since former President Jimmy Carter opened the U.S. Interests Section in 1977. With these actions, Cuban officials have begun to see the whole acoustic episode as an excuse manufactured by the Trump administration to reverse President Obama’s normalization policy.”

LeoGrande, one of Washington’s most respected Cuba watchers, warned that as time goes on, the chances of solving these sonic attacks shrink, boding ill for U.S.-Cuba ties that were finally beginning to bloom during Obama’s last two years in the White House. 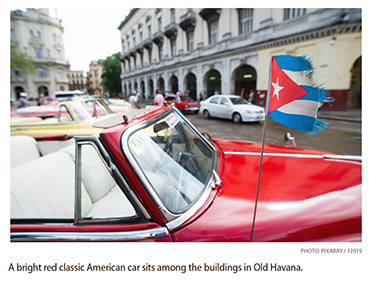 “Next month, Raúl Castro, the principal patron of normalization on the Cuban side, will retire from the presidency, raising the question whether his successor will persist in trying to improve relations where there appears to be so little interest in Washington,” he wrote. “Both U.S. and Cuban diplomats seem sincere about finding a way out of this impasse, get their embassies back up to full strength and resume the dialogues that were underway.”

But the longer the two missions operate with only skeletal staff, the more damage will be done. Without an operating consulate in Havana, the United States won’t be able to meet its commitment under a 1994 accord to issue 20,000 immigrant visas to Cubans annually.

Meanwhile, said LeoGrande, “the absence of diplomatic boots on the ground means fewer cultural, educational and business exchanges; slower progress on issues of mutual interest; less help for U.S. visitors who need consular services; and new hardships for Cubans seeking to emigrate to the United States, who now have to travel abroad to get a visa.”

As if to add insult to injury, the State Department — referring to the unidentified injured U.S. diplomats — has issued a travel warning that “we believe U.S. citizens may also be at risk and warn them not to travel to Cuba.”

“It’s clear that Cuba is among the safest countries in the world for Americans to visit,” he insists. “The situation regarding U.S. diplomats in Havana has been grossly mismanaged by the State Department and highly politicized by the White House and members of Congress against normalizing relations with our neighbor.”

Laverty added that the State Department’s announcement “completely discredits the integrity” of its travel warning system, and that “the harm caused to Cuban families that are separated because they can’t obtain visas is inexcusable, and the damage it’s doing to Cuban entrepreneurs cut off from U.S. visitors is a tragedy.”

And despite all the ranting from the White House, direct commercial flights continue to link Miami and other U.S. gateway cities to Havana, Santiago de Cuba, Camagüey and Holguín. In addition, cruise ships still bring American passengers to Cuba.

Things began changing on Dec. 17, 2014, when Obama announced that he and Raúl would restore diplomatic relations, even with the U.S. trade embargo, which only Congress can lift, still in effect. The following year, the Cuban Interests Section in Washington was upgraded to an embassy, as was the U.S. Interests Section in Havana. And in March 2016, Obama spent three days in Havana as the first sitting U.S. president to visit Cuba in 88 years.

Díaz-Canel Will Have to ‘Establish his Legitimacy’

José Ramón Cabañas, Cuba’s ambassador to the United States, couldn’t be reached for comment on either the coming leadership transition in Havana or U.S. policy toward his island.

But Michael Shifter, president of the Inter-American Dialogue, said Raúl’s impending departure won’t soften the Trump administration’s hostility against Cuba in any way.

He also said the new leader will be taking the reins of power in Havana in the midst of continuing economic chaos in Venezuela, Cuba’s biggest supporter. 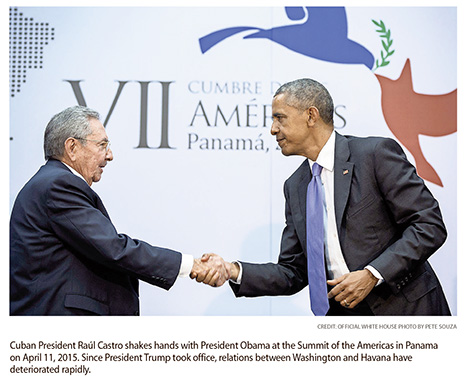 “There’ll be a new generation in power, and it looks very likely that Díaz-Canel will be president. The question is how much authority he’ll have,” Shifter said. “Raúl will continue to be head of the Cuban Communist Party, and Díaz-Canel has not really been tested as to what extent he’s committed to continuing the revolution. He will have to establish his legitimacy, which doesn’t come from the revolution — and his margin for maneuver, at least at the outset, will be fairly limited.”

According to a recent analysis by Nora Gámez Torres in the Miami Herald, “Machado and Valdés are believed to be part of a conservative faction within the government that views with suspicion the reforms Castro launched after he replaced his ailing brother Fidel in 2006, such as improved relations. Their departure might help to clear the way for Castro’s successor as well as a reformist agenda to try to fix the island’s grave problems: an economy stalled by the crisis in Venezuela, the dual-currency system, an aged population, little foreign investments, tense relations with Washington and younger generations who want more change.”

At the same time, while Raúl made tentative steps to open up small-scale private entrepreneurship, the Cuban military — through a conglomerate known as Gaesa — controls most major trade-related businesses on the island, from hotels to ports. As such, the military, which is committed to one-party rule, is unlikely to give up its vast economic holdings in favor of change or improved relations with Washington.

“Whoever the new president is — and I assume it will be Miguel Díaz-Canel — isn’t likely to make a radical shift in domestic policy. Not least, such intent will be constrained by the military’s own vested economic and political position,” said Christopher Baker, a Cuba travel expert and frequent visitor to the island. “Assuredly, Cuba will continue to pursue Raúl’s desire for respectful dialogue and engagement with the U.S., but his successor is guaranteed to protect Cuba’s sovereign interest foremost — no less than the Castros — rather than accede to U.S. ‘demands.’”

Meanwhile, entrenched interests on the U.S. side are likely to thwart any rapprochement with Cuba, regardless of who sits in the White House. Baker says current U.S. policy is unlikely to waver as long as the conservative Cuban-American lobby wields influence in Washington and Miami.

“The Cuban exiles are not interested in engagement with Cuba. That’s anathema to them, as is U.S. acceptance of homegrown reform within Cuba,” he said. “They want the government out of power so they can return as — in their eyes — long-exiled legitimate rulers.”