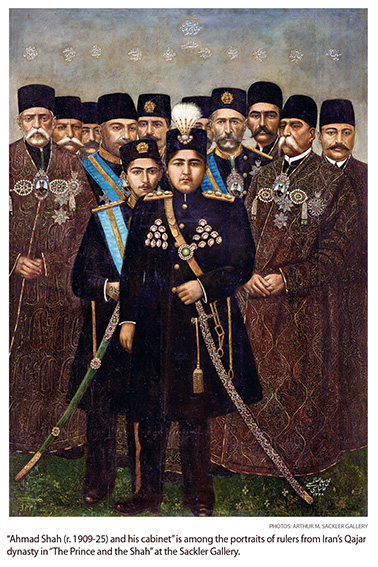 With today’s social media, every photo is carefully selected or edited to post the best image of how one would like to be perceived. Historical figures ranging from Queen Elizabeth of England to France’s Napoleon were no different in wanting to put their best face forward in royal portraits. Nor was Iran, whose kings and noblemen also sought to convey power and grandeur by commissioning self-portraits, which can now be seen in a rare exhibit at the Arthur M. Sackler Gallery.

In an intimate gallery space, 30 paintings, studio photographs and lacquer works depict different figures from the Qajar dynasty (1779-1925). There is a self-portrait of all but the first ruler, Agha Mohammad Khan Qajar, in the exhibit, which demonstrates how royal portraiture was used in Iran during the 19th and 20th centuries at a time of political and cultural change — and how it evolved to incorporate Western innovations with traditional Persian styles.

“The Prince and the Shah: Royal Portraits from Qajar Iran” is set up chronologically, with the first of the two rooms showing earlier nobility and kings. Fath-Ali Shah Qajar, the second king of the Qajar dynasty and the most memorable for having 57 sons and 46 daughters, can be seen in his self-portrait with the distinctive qualities of Persian art.

This Persian style uniquely weaves together perspective and line that is purposely created to make the paintings appear flat and two-dimensional. In Fath-Ali’s portrait, he is seen sitting on what is known as a Peacock throne, covered in rubies, pearls and diamonds. The three jewels are collected from different Iranian territories to show their unity under one king. It was an intentional depiction given that under Fath-Ali’s reign, Iran lost much of its northern territories in the Caucasus to the Russians. Fath-Ali, who is flanked by six of his sons, also dons a long beard that stretches to his waist as sign of masculinity and power.

Fath-Ali understood the power of image through artistic expression, which is seen in illustrations from the Shahnama, or “Book of Kings,” that is on display. The Shahnama is an epic long poem written by Persian poet Ferdowsi at the beginning of the 11th century. The poem consists of over 60 stories and nearly 1,000 chapters that intermix the history and mythology of the Persian Empire. The version of the Shahnama that is on display was scripted in 1612 but was later illustrated with colorful ink during Fath-Ali’s reign in the early 19th century. The illustrations of the legendary mythical hero Rostam strikingly, and not coincidentally, resemble Fath-Ali, with his narrow face, lean body and long black beard. Fath-Ali’s predecessors followed similar suit, controlling their image through artwork to project influence and legitimacy.

Many of the pieces display a blend of Western style in content and technology, along with traditional Persian techniques and representations of wealth and hierarchy.

Take the portrait of Fath-Ali’s 55th son, Prince Jalal al-Din Mirza, that was painted by the famous Persian artist Abu’l-Hasan Ghaffari in 1859. This painting uses the Western medium of oil on canvas, but the background uses the classic Persian backdrop of a curtain and window overlooking a landscape. There is use of the Persian emphasis on flat abstraction for the prince’s clothing and most of the background, but his face uses Western three-dimensional realism. The blending of both techniques creates a captivating, cross-cultural work when first entering the exhibit.

Other examples of Western-Persian fusion came with the advancement of photography that reached Iran in the 1840s. The lacquered technique of Persian art seen on functional objects like pen and mirror cases began to incorporate the use of photographs. An example is an 1860 lacquered box with five photographs in a row. The photograph of the fourth Qajar ruler, Naser al-Din Shah, constitutes the center photograph, with his two favorite sons’ self-portraits at his side. The last two photographs at the ends are official portraits of his sons’ tutors. 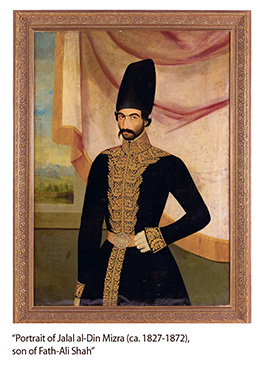 While different pieces throughout the exhibit show various ways artists and nobility were influenced by Western culture, there is always a strong undercurrent of Persian culture and pride.

Images of the king shown to the 19th-century Iranian public were usually in the form of painted portraits, even after photography was embraced by the Qajar dynasty. However, Naser al-Din was a photography enthusiast and was the first Qajar king to hire a royal photographer who would document his daily activities. These photos, unlike the staged portraits, were kept in albums and only passed around to fellow elites. There are several in the exhibit, including one where Naser al-Din is getting his teeth looked at by his Austrian dentist.

Naser al-Din, who ruled for nearly 50 years, introduced key Western-based reforms such as postal services and roads that helped modernize Iran. He was the first modern Iranian monarch to formally visit Europe. At the same time, he was never able to fully exert his authority over Iran’s various tribes and his concessions to foreigners, which enriched him personally, cemented his unpopularity; he was assassinated in 1896.

The Sackler provides an artistic appreciation for a dynasty that experienced political and cultural upheaval, as well as a complicated relationship with the West.

“The sheer number and variety of portraits under the Qajars is unprecedented,” said Simon Rettig, who curated the exhibit, in a press release. “It also testifies to a tremendous — still little understood — period of artistic innovation and experimentation, one that successfully integrates Western techniques and aesthetic principles and traditional Persian pictorial language.”

The Prince and the Shah: Royal Portraits from Qajar Iran

Nicole Schaller is an editorial intern for The Washington Diplomat.