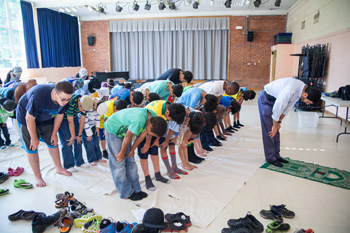 In late July, on the first day of Eid al-Fitr — the Muslim holiday that marks the end of the holy month of Ramadan — hundreds of men, women and children, dressed in their finest traditional South Asian, Middle Eastern or West African clothing, gathered for prayers in the ballroom of the Universities at Shady Grove. The campus was just one of three separate locations where the Gaithersburg-based Islamic Center of Maryland held prayer services that morning to accommodate a congregation that on major religious holidays swells to far greater than the mosque’s capacity.

Though exact numbers are hard to come by, the Muslim population of the greater Washington area is believed to have grown significantly in recent years. Maryland’s Montgomery County and Northern Virginia are home to the largest communities, topped by Loudoun County, Va., where the 2010 Religious Congregations & Membership Study estimated that more than 5 percent of residents are Muslim.

As the Muslim community in and around the nation’s capital grows larger and more diverse, families are finding an increasingly broad range of educational options for their children — even as raising kids who belong to a religious and cultural minority still has its challenges.

One of the newest initiatives is Camp Ramadan, a summer day camp for kids ages 3 to 15 that was started in 2013 by the Next Wave Muslim Initiative, a group of Washington-area Muslim Americans who got together to create what Tannaz Haddadi, one of the founders, calls “niche programming” that is “suitable for our children, family-friendly and English-speaking.”

Camp director Mona Eldadah, an Iranian-American mother of four who herself grew up in Montgomery County, says Camp Ramadan gives kids a meaningful way to spend the long Ramadan days, when observant Muslims abstain from food and drink from sunrise to sunset.

The camp, which is held at the Washington Waldorf School in Bethesda, Md., introduces kids to traditional Islamic arts and crafts, such as Arabic calligraphy and bookbinding, that are seldom taught in the United States. The classes are led by Josh Berer, an American artisan who has studied extensively in the Middle East. At this year’s camp, kids learned how to make handmade paper and the basic techniques of paper marbling, swirling different colors of paint atop a base of water to produce delicate, no-two-alike works of art. 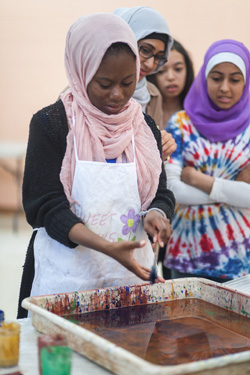 Children at Camp Ramadan, which was started in 2013 by a group of Washington-area Muslim Americans, learn traditional Islamic crafts such as paper marbling, papermaking and calligraphy.

Meanwhile, instructor Alexa Abdelatey led the youngest children (ages 3 to 6) in activities that revolved around the theme of animals that are important in Islam — for example, making “spiders” and “spider webs” out of pipe cleaners, paper plates and string, in reference to a well-known Islamic tradition about a spider web that protected the Prophet Muhammad while he hid from his enemies in a cave.

Abdelatey, an American who grew up in the Washington area and converted to Islam “following a very powerful spiritual experience” some years after marrying her Egyptian husband, says she feels it’s important for kids to “have a camp experience that acknowledges what’s unique and special about a community — a Muslim camp environment.”

Taking part in community service is another essential component of Camp Ramadan; as Eldadah puts it, “Caring for the needy … is in fact a religious duty” in the eyes of many Muslims. This year, campers prepared food to take to Stepping Stones Shelter in Rockville, Md., along with soliciting canned food donations from neighborhood residents and assisting a rehabilitation hospital in Baltimore.

Spaces for the weeklong 2014 camp filled up quickly and “we had to turn people away,” said Haddadi. Indeed, Camp Ramadan has been successful enough that the Next Wave Muslim Initiative is considering expanding it in 2015.

During the school year, some area Muslim families turn to Islamic schools, of which there are at least half a dozen in the greater Washington area, most of them located in Virginia and Maryland. By and large, these schools follow the curriculum of their local school districts while also offering Arabic language classes, Koranic study and recitation, and instruction in religious beliefs. Some go up through 12th grade, while others end after middle or primary school, and most are accredited.

For parents such as Dilshad Fakroddin, a Rockville mother of three, Islamic schools offer not only religious education but also an environment where their culture and values are passed on to their children.

“Religion and spirituality are paramount in our lives…. Providing [our children] with a foundation rooted in religion and community has been a positive experience in many ways,” she said. “Just beginning the day with recitation of our holy book … is a huge blessing in and of itself.”

Karen Keyworth, co-founder and director of the Michigan-based Islamic Schools League of America (ISLA), says these schools also serve a role in fostering a “sense of normalcy” for kids who feel like they don’t fit in with the dominant culture — for example, girls who wear a hijab, or headscarf. 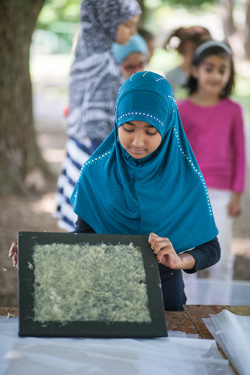 At Camp Ramadan, children learn how to make handmade paper, along with other arts and crafts.

A few non-Islamic private schools in the area are also perceived as being particularly welcoming to students from a Muslim background. Camp Ramadan’s Eldadah and Abdelatey both send their children to the Washington Waldorf School, which appeals to them because of its emphasis on spirituality and reverence. The Muslim student population is now sizeable enough that, for the first time in its history, the school closed on the first day of Eid al-Adha in October 2013 in observance of the holiday.

“It was the first time in Montgomery County, [which] hasn’t done this. The public schools haven’t taken off for Eid. I felt, ‘Wow!’ They really recognize the presence of Muslims and how important it is for them to be a valued part of the school,” said Eldadah.

The school says it was simply the reasonable thing to do to accommodate a diverse student body. “We take [off] the major Christian holidays, the major Jewish holidays, and so it just made sense to us that of course we would do the same [with Muslim holidays]. We just try to be universal in our approach,” said Waldorf enrollment director Lezlie Lawson.

For financial and geographical reasons, however, the majority of kids from D.C.-area Muslim families attend public schools, and some feel the school systems have done too little to accommodate them despite their growing numbers. Currently, none of the Washington-area school districts close for the two major Islamic holidays — an issue that came to the fore in Montgomery County last year after a coalition of local Muslim leaders launched “Equality for Eid,” an as-yet-unsuccessful campaign to petition the school board to recognize the holidays.

“I remember growing up, every Eid it was, ‘Are we going to go to school or are we going to stay home and celebrate with our family?’ Our parents were always like, ‘No, you have to go to school.’ So you miss out on the celebrating with your family,” said Zainab Chaudry, 31, a Baltimore native of Pakistani heritage and the Maryland outreach manager at the national office of the Council on American-Islamic Relations (CAIR), which organized the Eid campaign. 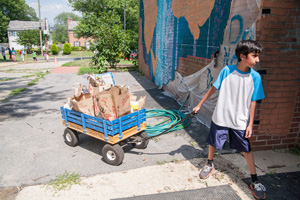 A Camp Ramadan camper pulls a cart of canned food collected from neighborhood families to donate to a homeless shelter.

But the issue is not just about missing out on a family celebration; older children in particular can face a difficult choice between observing a religious holiday and staying on top of their schoolwork.

“Imagine that it’s Christmas Eve and you’re studying for an exam that’s going to be on Christmas, and it’s going to be 30 percent of your grade. Would that be OK? Most Americans would consider that unacceptable. That’s essentially what our kids face,” said the ISLA’s Keyworth.

The school board of Montgomery County — which since the 1970s has closed schools for the major Jewish holidays in addition to the Christian holidays — has countered that it’s not a question of recognizing one religion over another but of sheer attendance.

“We were met with a lot of resistance. We were told that we have to prove that attendance would be impacted significantly,” said Chaudry. “We’re not asking for special rights for the Muslim community. We basically want equal rights.”

Aside from the Eid issue, however, some Muslim parents, and their children, prefer public schools for the wider range of opportunities they offer, such as languages and extracurricular activities. Fakroddin of Rockville says her three children have each experienced both public and Islamic private schools, with two gravitating more toward the latter, while her middle child, an outgoing 11-year-old boy, has opted to stay in public school for the more diverse social network.

“I really feel like we’re kind of a bridge in that way, where … we’re having, by God’s grace, a balanced, positive experience with both” types of schools, Fakroddin said. “More than anything, for my husband and me, I think it’s made us realize that … there’s just no one size that fits all. It’s really an individual experience.”

Vanessa H. Larson (@vanessahlarson) is a freelance writer in Maryland.