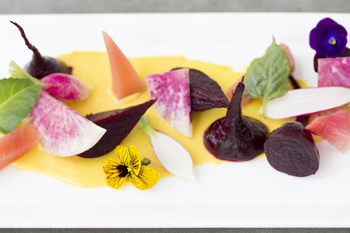 Ripple has earned a reputation for using local, seasonally sourced ingredients in dishes such as the beet salad, although the restaurant’s menu changes almost daily.

It has been a banner year for Cleveland Park’s Ripple, with nods from local and national groups alike. The little restaurant just across the street from the Uptown Theater opened back in 2010 as a wine bar. This year, it won the Restaurant Association Metropolitan Washington’s RAMMY Award for its wine program, as well as a RAMMY for best upscale casual restaurant of the year, a sign of Ripple’s evolution and all-around appeal.

Like all good businessmen, owner Roger Marmet, a former executive for The Learning Channel with no previous restaurant experience, did his homework before opening Ripple in a potentially risky location — several well-established spots are within a stone’s throw (and several have closed). Looking carefully at the attributes of successful ventures in the area, he put together a casual concept that incorporates local and seasonally sourced ingredients, eco-friendly wines, house-made charcuterie and unusual cheeses, a winning recipe that has not only endured but also thrived. With its combination of whimsy and solid performance, Ripple’s stature has grown as a comfortable neighborhood restaurant and as a destination in its own right.

Ripple balances its commitment to its original wine focus with an equally serious emphasis on the food. Undaunted by chef Logan Cox’s departure last year, Marmet sought out a chef who could carry on Cox’s work in modern American cuisine based on organic, seasonal, locally sourced products while imbuing it with his or her own originality. After an extensive search he brought on Marjorie Meek-Bradley, the chef de cuisine at Mike Isabella’s Graffiato, in her first executive chef role and her first chance to create her own dishes, not someone else’s. 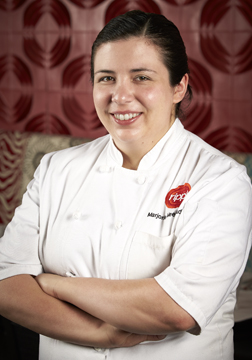 Marjorie Meek-Bradley has been called a rising chef by Food & Wine magazine and the James Beard Foundation.

Once again, Marmet’s hunch was a good one. Meek-Bradley took on the new role with a passion and dedication that is evident in each new dish she invents. And the industry has noticed. She’s been a finalist or semifinalist for several rising chef awards from the likes of Food & Wine magazine and the James Beard Foundation.

A northern California native, Meek-Bradley grew up in a time and place where seasonal and locally sourced products were the norm, laying down a foundation for her culinary approach. Extensive experience in kitchens across the country under top chefs honed both her skills and her understanding of the importance of technique. It also toughened her up for the challenges of running her own kitchen and taking her own risks.

She’s clearly comfortable with risk. Ripple’s menu changes almost daily (perhaps one of the few downsides of the restaurant since you can never be sure you’ll get the dish you’re craving). The options reflect what the kitchen has been able to procure and what creative fancy strikes the chef. USA Today tapped Ripple as having one of D.C.’s best seasonal menus earlier this year. Simply reading it is a culinary adventure. Offering snacks, small plates, main courses and side dishes, the menu offers both flexibility and experimentation.

Meek-Bradley uses ingredients like an artist’s palate —  a dab here, a splash there and a big flourish right in the middle. But her palate is multidimensional, encompassing taste, texture and color to elevate her masterworks. A salad of brightly colored heirloom tomatoes mixed with soft, pale white, house-made ricotta, smooth peaches and crunchy cashews is a summer bouquet bursting with flavor.

Ripple offerings start simply enough — perhaps a snack of pickles, or marinated olives or bacon-roasted pecans. But after that, one dish after another offers unusual but effective combinations of ingredients. Stuffed bone marrow, for example, is paired with house-made bacon, chimichurri and blueberry jam. A slightly heavy smoked eggplant agnolotti, meanwhile, is dressed with pesto, maitake mushrooms and stracciatella. A soothing chilled cauliflower soup is flavored with saffron and accented with blue crab chunks, cucumber and radish. 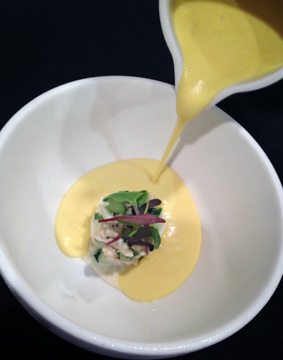 Diners preferring meatless meals will not be disappointed at Ripple. The menu features well-developed dishes such as a mixed-green salad with shaved fennel, local berries, hazelnut and garrotxa cheese, as well as a compressed melon salad with kohlrabi cabbage, fennel and Mexican sour gherkins. Main course options include tender, crispy squash blossoms with quinoa, wild rice, beets and Greek yogurt.

Ripple also offers a free-standing cheese and charcuterie station at the end of the bar, where meat and cheese are sliced to order and you can also get a grilled cheese sandwich that’s an inspired twist on the homey classic. You can pick your own ingredients or pick one of Ripple’s rather exotic creations, such as the rich e rich (hand-sliced prosciutto, Morbier cheese and truffle butter) or the infidel (pork rillettes, Surryano ham, taleggio cheese and pickles). Both are delicious but very rich. 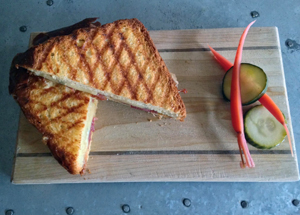 Ripple is known for its inventive grilled cheese sandwiches.

Ripple has recently brought on pastry chef Vanessa Ochotorena to handle the end of the meal. Ochotorena mirrors Meek-Bradley’s eclectic approach in constructing complicated desserts. Highlights include the bread pudding with almonds, sweet corn ice cream, caramelized peaches and rum cream, as well as the dense chocolate-hazelnut tart served with dulce de leche, cherries and a surprising but refreshing buttermilk sherbet. While desserts change frequently as well, one of the favorites, baked-to-order chocolate chip cookies and milk — on the menu since Ripple opened and still one of the best choices — is always available.

Part of Ripple’s growing success is almost certainly due to the efforts of Danny Fisher, the general manager and wine director who has been with the restaurant since it opened. Prior to joining Ripple’s team, Fisher helped open Cork Wine Bar and worked with a wine importer in Seattle, both experiences that deepened his appreciation for wines and his understanding of the complex challenges of operating an upscale casual spot in a crowded market. His time as a commercial fisherman off the coast of Washington and Alaska also probably taught him how to weather any storm.

A first-level sommelier from the Court of Master Sommeliers, Fisher has put together a wine program of over 400 variably priced bottles from around the world, along with over 50 wines by the glass. He tends to emphasize small-production wineries that use sustainable, organic and biodynamic viticulture practices, and he likes to sell the brands of winemakers he has met personally. Fisher too has received recognition for his work at Ripple, earning a RAMMY and a listing on Wine Enthusiast’s 100 best wine restaurants in America for 2014. Though focusing primarily on wine, Fisher has put together a nice collection of craft brews and ciders as well as some fascinating cocktails, such as spurring an aviation — a potent combination of Espolón Reposado Tequila, maraschino liqueur, creme de violette and lime juice.

Though it has been around for several years, Ripple has taken its time to get things right, and the burst of attention this year illustrates just how well the strategy has worked. Reservations are hard to come by on a weekend, and there are frequently crowds on a weekday night. While some of this popularity is certainly the result of the awards this year (and probably frustrating to those who discovered the Ripple secret before the awards) and the critical luster may fade, the Ripple team’s collaborative efforts to deliver a satisfying experience for each diner every time is likely to ensure that this is not a just another ripple on the surface of the D.C. restaurant pond.