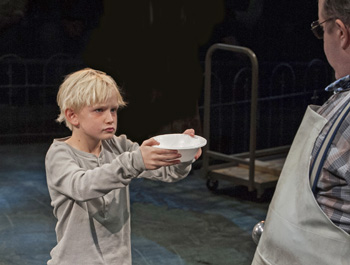 The “Oliver!” currently at Arena Stage is unlike any “Oliver!” you’ve seen. The reason: It’s brilliantly transformed into a modern-day retelling that is doused with startling talent.

The script, re-imagined by director Molly Smith, keeps the Tony Award-winning play’s inherent sweetness, sentimentality, humor and powerful musical score. But around every corner lurks a dark, cutting edge made more formidable than usual in this play by her handiwork.

Smith has had great success producing musicals at Arena — remember “Oklahoma!” and “Fiddler on the Roof?” So it’s no surprise that she’s raised the bar with this theatrical rendition of the Charles Dickens classic about an orphan boy trying to survive the mean streets of 19th-century Victorian London, which are beset by opportunistic conmen, crafty gangs and double-dealing thieves.

This “Oliver!” is set in present-day London because, as Smith points out, there is just as much poverty and homelessness today as there was in the play’s original Dickensian time. And because of this update, the hard-hitting, woeful tale of a destitute society, which has the disadvantage of becoming almost cliché with time, can’t be shied away from in this version made anew.

“What does a story written in the last century tell us about our world today?” pondered Smith, who is also the theater’s artistic director. “One in 25 children are living on the streets of London today. The disparity between the rich and the poor is at its highest level since Dickens’s time.”

Reinforcing that inequality is Todd Rosenthal’s massive set in the Fichandler’s theater-in-the-round. The set is a visual representation of two contrasting worlds: the haves and the have-nots, a theme well explored by Dickens. Most of the action takes place under a bridge, “which reminds us what it is to live as the underclass,” said Smith. With the exception of the home of Mr. Brownlow (Oliver’s savior), the bridge is where the rest of society lives, i.e. those fortunate enough to not live in an orphanage or be part of a street gang. The bridge itself rises an impressive 14 feet above the stage and seating and runs in two directions, allowing the actors to use the multidimensional space. 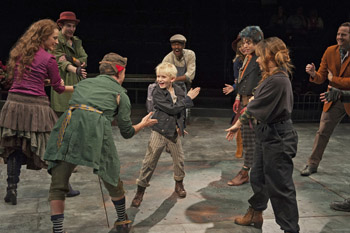 Other aspects of the setting also powerfully translate to the present. It’s amazing what changing the fashion, gestures and technology does to the time-honored plot. The orphans have spiked, dyed hair; Nancy, Bill Sikes’s abused lover, wears tight-fitting leggings, a leather vest and sports a softened red Mohawk; and Sikes is more Guido than 19th-century British crook, with a gold chain and greased hair.

Even the orchestration and brilliant choreography are contemporized while combining Victorian-era flair. The opening number, “Food Glorious Food,” features metal plates that the urchins use as percussion instruments. Nancy’s “It’s a Fine Life” is inspired by a funky, rhythm-and-blues pulse, and “Oom-Pah-Pah” leads Act II with couples paired in modern dances. Arena Stage does the ballads justice by preserving their original, pure interpretations.

Cherub-like Jake Heston Miller, who plays Oliver, is truly a star in the making. At just 9 years old, he has a crystal-clear, vulnerable voice that will moisten your eyes with classics like “Where is Love?” and “Who Will Buy?” Meanwhile, Eleasha Gamble, as Nancy, belts out an alarming “As Long as He Needs Me” that will give you chills. Gamble’s brilliant portrayal exposes Nancy’s dichotomy — powerful and determined, yet defenseless and exposed.

But it is Kyle Coffman as the Artful Dodger who steals the show. It seems the Dodger is artful at more than just picking pockets. First off, Coffman can dance, and choreographer Parker Esse makes him shine. He teases during “Consider Yourself” with some on-point pencil turns and then breaks loose, dancing on the railings, throwing in some tap moves and leaps, and essentially taking over the stage with limitless exuberance. Coffman is as endearing in his relationships with Oliver and Nancy as he is quick and sprightly on the dance floor. 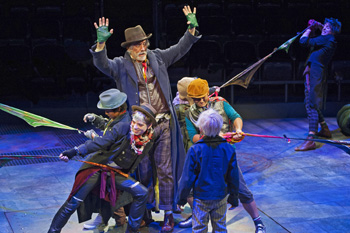 Jeff McCarthy makes a compelling Fagin who doesn’t smack of the anti-Semitism infused into his character in the infamous 1968 film and in Dickens’s novel. He’s also more likable — greedy rather than evil, and more humorous than most Fagins, especially with some creative directing at play’s end. Even his imploring the boys to withstand gunfire for him in “I’d Do Anything” is played off as satire.

The other characters who round out the story are just as entertaining. The romance between ghastly Mr. Bumble, played by a larger-than-life Paul Vogt, and powerhouse singer Rayanne Gonzales as Widow Corney is comical. What comes as more of a surprise is the treatment given to funeral takers Mr. and Mrs. Sowerberry, played by the talented Tom Story and Dorea Schmidt. “That’s your Funeral,” a song that didn’t make it into the movie, lends much-needed giggles in a story that is riddled with pathos.

This “Oliver!” is still a feel-good musical melodrama: It has a happy ending after all, at least for its main character (spoiler alert). But in this gutsy, honest portrayal that adds 21st-century heft to the original, you’ll liable to feel the highs and lows more intensely.