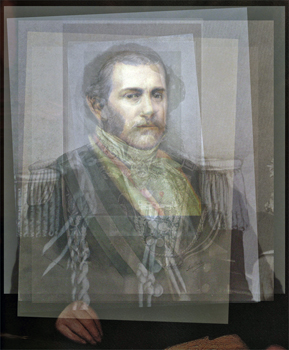 Argentinean artist Alejandro Almaraz superimposes portraits on top of one another to create striking compositions such as “All the Presidents of Argentina from 1826 to 1892.”

The people in “Portraits of Power,” a series of photographs (on top of photographs) of political leaders from around the globe, look almost transparent, as if a light is shining through them.

That’s the impression Argentinean artist Alejandro Almaraz wants to convey as he manipulates official portraits to upend tradition and cast a new light on popular authority figures throughout time.

Each of his “portraits” — now on view at the Organization of American States Art Museum of the Americas — are really numerous portraits, comprised of anywhere between four and 40 translucent images, layered over one another. While most can be called “photographs,” some of the composites actually originated from paintings.

This technique creates a haunting, even dizzying effect that distorts the viewer’s perception, as they struggle to focus on the blurry subject. That, in turn, forces viewers to really concentrate on the person — on their essence — instead of the smudgy edges, deceptive shadows and overlapping images that seek to obscure the subject. The end result is that any formality has been stripped from the official portraits, replaced with an inexactness that’s both transformative and disturbing.

Almaraz seems to be exploring the nature of power by dissecting and reimagining the official portraits of men (mostly) in charge of nations and empires. You might expect that powerful personalities would overshadow mediocre ones, but that’s not always the case. In fact, sometimes the opposite happens: Powerful personalities disappear and sink into the overwhelming assault of the postures of office, enabling ordinary bureaucrats to take the reins of the state.

The portraits run the gamut (from 1810 to 2008) and include a parade of prime ministers, presidents and heads of state from Australia, Argentina, Brazil, Britain, Canada, Chile, China, France, Japan, Korea, Mexico, Russia, South Africa, the United Arab Emirates, the United States, Vietnam and other nations.

It is difficult to draw conclusions from the results, especially because we all have emotions draped in clichés about other countries, or our own, and about how power is supposed to look. 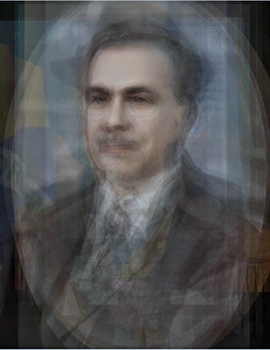 Time, of course, alters the appearance of power and is an important element in a project like this. For instance, we see the passage of time in the portraits from pre-World War II Japan, in which the antiquated formal dress uniforms feel dragged along by centuries-held traditions. Meanwhile, the composites of British prime ministers appointed by Queen Elizabeth seem to carry the stoic air of Victorianism about them, along with a touch of imperial moustaches. Some of the portraits project not power but bygone regality, seen in gazes that suggest the ephemeral nature of human life, even for those who exude confidence, as if they’ll go on conquering forever. Some dominant personalities shine through despite the passage of time, while others fade into the annals of history.

Others aren’t represented at all: There is no trace of Abraham Lincoln or Andrew Jackson in the early part of the American presidents. On the other hand, the advent of photography has a strange effect on a few U.S. presidents, burying John F. Kennedy, Lyndon B. Johnson and Richard Nixon in a “Mad Men”-esque sheen of white man hegemony.

The two portraits of the leaders of South Africa speak to upheaval and change — apartheid and post-apartheid — with the post-apartheid face bearing a distinct smile, the only one that we could see in the exhibition, while his predecessor wears the stern mask of officialdom.

Clothes make a difference, as does size. All the leaders of the Soviet Union seemed to have merged into a bulky Leonid Brezhnev-like form, while modern-day Russia’s leaders all just resemble Vladimir Putin. No surprise then that Vietnam’s composite should resemble Ho Chi Minh, but it is surprising that the North Korean leadership composite looks almost exactly like Pyongyang’s current youthful leader. There is also something to be said for the man behind the curtain in the Chinese composite, where you can make out the silk presence of Zhou Enlai, just out of reach but nonetheless there.

Interestingly, Almaraz decided to pursue a career in art and photography after studying philosophy at the University of Buenos Aires. Perhaps those philosophical underpinnings are what imbue his portraits with such power, in all its guises. Leadership here is an enigma — constantly being shaped by time, the political tides and an artist’s clever touch.