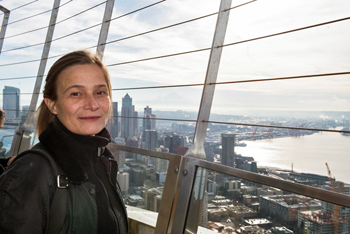 Many ambassadors’ spouses don’t officially work while in Washington beyond their unofficial diplomatic duties, which often feel like full-time jobs anyway. But some perform double-duty, juggling two demanding careers in one hectic city.

Gitte Wallin Pedersen and Danish Ambassador Peter Taksøe-Jensen have been performing this balancing act since arriving in Washington in 2010. An economist with a master’s degree from the University of Copenhagen, Pedersen currently works at the International Monetary Fund as an advisor to the executive director of the IMF Nordic-Baltic Constituency Office.

“I work full time, so most of the time Peter will have to go on business trips on his own,” she told us. “Nevertheless, I do have five weeks of vacation at the IMF, so every now and then it is possible to combine business and pleasure and helping him in representing Denmark around this great country.”

In between, she says she loves her work analyzing and reporting on macroeconomic and financial trends in the United States.

Gitte Wallin Pedersen, an economist at the International Monetary Fund, seen above at the Empire State Building, previously served as minister-counselor at the Danish Embassy in D.C. while her longtime partner, Danish Ambassador Peter Taksøe-Jensen, worked in New York.

“I have always worked,” said Pedersen, a former advisor to the Danish Ministry of Economic Affairs and Danmarks Nationalbank who noted that she’s particularly interested in how economics affects society and politics. One time, Pedersen even took a position as minister-counselor here at the embassy while Taksøe-Jensen worked in New York as assistant secretary-general for legal affairs at the United Nations. “We took turns going back and forth by train to see each other on the weekends,” she recalled. “But three months later, it was announced that he would be the next ambassador to the U.S. and I was asked to give up my job since he would have become my boss.”

Pedersen and Taksøe-Jensen have been together for 14 years, though they are not married — “that’s a very Danish thing,” she notes. Their family includes his two children: Christian, 24, is studying law in Denmark while Caroline, 22, is studying medicine. “It’s a great profession but when she was 12, she wanted to become a nurse. After a few years, she just adjusted her dream to become a doctor instead. They come for holidays, especially if we offer to pay for their tickets,” Pedersen quipped.

Despite their busy schedules, the couple works hard to find time to relax and experience life outside the Beltway.

“We have been to all 50 states,” she said proudly. “Peter and I love to travel…. California has fantastic land and cities. We saw a sweet black bear in Sequoia National Park, and Utah and Arizona have the red, green and yellow rock formations. You have so many national parks. We loved Colorado. Minnesota is flat like Denmark and Iowa has lots of Danes — descendents from the original Danish immigrants who settled there.

“On the weekends, we take small road trips in the convertible. If we have a one-day trip, we might go to the Chesapeake Bay, the Shenandoah mountains or Williamsburg [in Virginia],” she added.

Pedersen said they particularly enjoy driving in America because the country is so vast. “In Copenhagen, if you drive for 15 minutes, you could be in a different country,” she pointed out.

“Denmark is so much smaller that we are used to biking or walking to work, to dinner. We have lots of friends who don’t even have cars,” she said. “Danes would rarely commute an hour to work as you would here or drive half an hour for dinner. Your distances are just so much longer here. Sweden is only 15 minutes away. In Denmark, everyone lives in close. We live a five-minute walk to my mother.”

The short distances have spawned a very different system in Denmark, one that discourages car use in favor of public transport — an eco-friendly philosophy seen throughout Europe. “Fifty percent of all Danes don’t own cars. For those who do, the fee is very high — 180 percent of the price of the car. That’s why many people buy small, ‘formerly owned’ cars. Gas is about $8 a gallon,” Pedersen explained.

The high taxes in Denmark and other Nordic nations seem anathema to many Americans, although Pedersen says socialist stereotypes oversimplify how economically competitive her homeland is. She says you can have both a strong social safety net and a robust private market.

“Americans misunderstand that although Denmark is a welfare state with free health care, education and considerable other social benefits financed via taxes which are, consequently, fairly high compared to other countries, it is not an inefficient and a socialist country. For instance, health care in Denmark — with free access for all citizens — is quite efficient and half as costly as in the U.S. Denmark is a well-functioning and market-based country, which ranks as number five on the World Bank’s Doing Business Index.”

Denmark is also consistently ranked in various surveys as one of the happiest countries on earth. In fact, it nabbed the top spot in this year’s U.N. World Happiness Report — for good reason, Pedersen says.

“We know that our children’s education will be provided for, our health care too. Even if we have cancer, we don’t have to be concerned with the cost. We don’t have any big worries.”

Perhaps as a result, Danes have been able to focus their attention on their charming yet dynamic capital, Copenhagen, which is home to world-class architecture and design, colorful seaside attractions, a pulsating nightlife, and lots of Michelin stars. 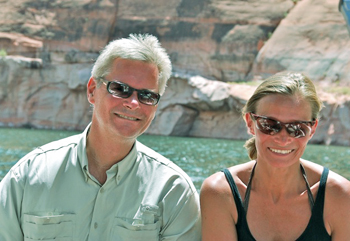 “What I wish Americans and others knew about Denmark is that we are part of the Nordic food trend. Copenhagen’s Noma is widely known as one of the very best restaurants in the world. It was recently featured on CNN on Anthony Bourdain’s show, ‘Parts Unknown.’ Noma is the prominent example of a more general trend in Denmark of excellent farm-to-table restaurants in Denmark, which focus on high-quality and seasonal ingredients with a creative and distinct Nordic touch.”

While Noma is a culinary hotspot that has put Copenhagen on the map “as one of the most eco-minded and creative cities in Northern Europe,” according to the New York Times, for her part Pedersen would much rather stay at home than dress up for a glitzy night on the town.

She and the ambassador often cook their own dinner in the residence’s shiny stainless-steel industrial kitchen or they grill out on the terrace, even though they have an executive chef whom “we love.”

It’s all part of the Danish tradition of “hygge,” a laidback, cozy atmosphere that cherishes relaxing with good friends or loved ones. “Danes are very good at being cozy,” Pedersen said. “We like informal visits at home with friends. Usually, we start around 7 p.m. and don’t go home until 11 p.m. or midnight. When we do go out to a restaurant, we go with a group. It is expensive to eat out. Where a hamburger might cost $10 to $12 here, in Denmark it would cost $20 to $30.”

Of course, it’s not all sunshine in Denmark — literally. “All the time, Danes talk about the weather, which is often gray and rainy. We are deliriously happy when we have a sunny day. Everyone is smiling, but we still don’t talk to a stranger,” Pedersen noted. “Danes are not as talkative as Americans; we never speak to someone on the street.”

Another fundamental difference between the two countries: Denmark has a royal family, a tremendous source of pride for the nation.

“The Danish Kingdom is the oldest in the world and an integral part of Danish society,” Pedersen told us. “The members of the royal family are perceived as very good representatives for Denmark and Danish virtues. They do an important job for the Danish businesses around the world and are also very interested in other cultures and contribute to social causes.”

Queen Margrethe II has two sons. Crown Prince Frederik, the heir apparent, and his wife Crown Princess Mary often visit the United States In 2010, they came to Washington to commemorate the 50th anniversary of the Danish Embassy. The late Vilhelm Lauritzen, a leading Danish modernist architect, designed the building located on a hilltop at the end of Whitehaven Street, home to both the chancery and residence. It was the first contemporary embassy in Washington, and the building and its interior are the epitome of modern Danish design. During that D.C. visit, the down-to-earth crown prince surprised Washingtonians by riding around town on a bike. (He regularly bikes around Copenhagen, even taking his children to school.)

Furniture by famed Danish designers such as Finn Juhl also grace the Danish residence and chancery. Pedersen and the ambassador have added their own touches as well.

“Peter’s Poul Kjærholm desk is in the library and our black leather daybed over there is the same as those at MoMA [New York’s Museum of Modern Art,]” Pedersen said. “The daybed is probably the most famous of all Danish furniture. The ‘egg chairs’ and the daybed are the work Arne Jacobsen, another popular Danish designer. Of course, upstairs we have a swan, as most Danes do. The pottery at the front entrance is from the State Museum in Denmark. Mainly, we don’t like too many things around. When you have too much, you don’t see anything because you don’t have space around the furniture. We took some furniture out because Danish furniture is really sculpture.”

But they also have a piece of furniture that reminds them of American royalty — at least as close as we’ll come to it — in the form of a Hans Wegner chair. “This chair was made famous by your presidents sitting in them — first JFK, then [Bill] Clinton and, most recently, Obama.”