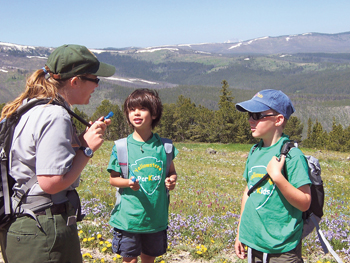 When many people think of America’s national parks, they think of the battlefields and monuments of the east, or the majestic landscapes of the west. But walk through Dupont Circle in downtown D.C. and you’re strolling on national park land. And with more than 400 units of the National Park Service, the government agency is taking to social media to connect with, entice and educate visitors on its vast natural, historical and cultural resources.

ParKids provides students with a three-day educational experience at Yellowstone National Park. As part of a fire workshop, students hike to the top of Mount Washburn to talk with a ranger about fire management.

Celebrating its centennial in 2016, the National Park Service (NPS), headquartered in Washington with regional offices across the United States, is making a broader push to engage online. Parks are using #NPS100 to connect with fans, and the #FindYourPark initiative reminds social media users that there’s a park out there for them, whatever their interests may be.

Like the NPS itself, the parks follow a spoke-and-wheel approach with their social media. Each park manages its own digital presence, while operating under the shared umbrella of the main National Park Service’s social strategy and mission. With a renewed push to engage more urban dwellers and international visitors, experiencing a national park, online or in person, is more accessible than ever.

Yellowstone National Park, one of the “crown jewels” of the park service, holds the world’s largest concentration of geysers, and Old Faithful is an iconic landmark. Sweeping vistas, expansive campgrounds and long, winding park roads make for beautiful photographs, but Neal Herbert, Yellowstone’s digital communications specialist, has learned that posting pretty pictures can have unintended consequences.

In July and August in particular, overcrowding is an issue, and posting photos of unhurried visitors sitting serenely next to Old Faithful doesn’t accurately portray the realities of the experience.

“We’re shifting the way we talk about summer this year. We’re working on a communications plan to explain what we’re likely to find if visitors come here in July and August. We may be our own worst enemy by posting pretty pictures and throwing them out into the world to see,” Herbert said. “So instead of posting pictures of geysers or single people or families, we’ll try to show photos of actual traffic or crowds around Old Faithful.” 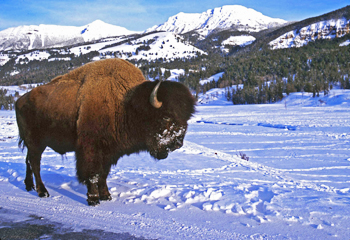 Just 30 minutes outside the South Carolina capital of Columbia is Congaree National Park, which boasts the largest intact expanse of old-growth bottomland hardwood forest remaining in the southeastern United States. It’s an easy trip from Washington, and a popular weekend destination. Scott Teodorski manages the park’s social media presence and says social media has changed not only how parks reach their visitors, but how they interact with each other.

“The national parks are a community, and the thing that happened in the past before the social media was that parks were islands. As you get on [Twitter or Facebook], you’re going to see more posts from the parks that are linked to other parks, and you’re going to discover things that you never knew were out there — not just places to visit, but the stories that are out there and a deep part of the cultural history of the United States.

“I’m often blown away,” he added. “I’ll see something from some park and social media will bring it home to me.”

The NPS Urban Agenda, which began four years ago, strives to connect city dwellers with green space, both urban and rural. Active on Twitter at @NPSUrban, Elle O’Casey, urban parks and community engagement specialist, said the goal of the initiative is to highlight best practices in urban parks and planning. “We’re really reimaging our parks for the 21st century, beyond the typical older, white audience we usually reach,” O’Casey said. “The Twitter feed is just one element of trying to find little points of light that are happening and trying to elevate them into the conversations.”

O’Casey said that with more than 80 percent of Americans and expats living in cities, urban parks play a vital role. The NPS Urban Agenda is incubating in 10 model cities, including Washington, New York, Philadelphia and Boston.

“Urban parks are at the intersection of health and nature and urban innovation,” O’Casey said. “The Park Service really wants to learn from the creativity already existing in urban spaces, like the High Line Park in New York City, which is a great example of revitalized urban space.” 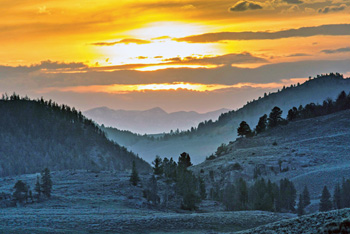 Lamar Valley at Yellowstone is seen during the sunset.

Parks are using their social media reach for another critical function: to find and prosecute criminals. While vandalism has always existed in parks, cases have been on the rise since social media made it easier for people to showcase their graffiti. On the flip side, it has also helped capture criminals via their digital footprint. Teodorski said that at his previous job, social media was a critical law enforcement tool.

“At Cumberland Gap [National Historical Park], social media helped us protect our cultural resources. We had a problem with people poaching ginseng and within a matter of months, we prosecuted 15 or 16 cases. In another instance, somebody flew a drone into the ruins and posted the video, and that’s how we caught them.”

During the National Park Service’s 100th anniversary, millions of people will flock to these national treasures of preservation, whether urban or rural, large or small, natural or historical. Before they venture outside and unplug, Herbert, Teodorski and O’Casey say visitors should go online first. New digital tools, including multilingual videos and guides, more resources for international visitors and easier ways to engage, will help visitors get the most out of their park experience.

“Social media is a great way to communicate to our very wide audience about the realities of what national parks are struggling with,” Herbert said. “There are a lot of controversial issues. And social media is an amazing way to tell our story.”

Once inside the park, however, turn off the tablets, cell phones and other devices and get outside, breathe the air and take it all in. The online world will still be there when you’re done with the natural one.