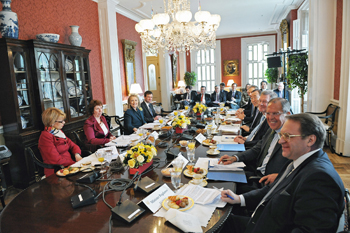 Washington is home to many buildings that are both iconic and secretive at the same time. Blair House, known more casually as the president’s guest house, is no different.

Built in 1824, Blair House consists of four interconnected townhouses located on Pennsylvania Avenue across from the White House. The federal-style complex has hosted a variety of heads of state and visiting delegations, but it was originally home to Dr. Joseph Lovell, the first surgeon general of the U.S. Army. It got its name, however, shortly after a circuit court clerk-turned-newspaperman took up residence there in 1837, seven years after Francis Preston Blair first moved to D.C. at the invitation of President Andrew Jackson. Blair’s editorials in a local Frankfort, Ky., newspaper appealed to Jackson, who asked Blair and his wife Eliza to turn a faltering D.C. paper called the Globe into a pro-Jackson administration publication.

Blair gained political power as editor of the Globe and the Congressional Globe, the first published proceedings of Congress, with partner John Cook Rives. Blair “was the most influential member of President Jackson’s informal group of advisors, the ‘Kitchen Cabinet,’ and remained an important confidant to Jackson’s successor, Martin Van Buren,” according to BlairHouse.org. “Abraham Lincoln also sought Blair’s counsel during his presidency and appointed Blair’s eldest son, Montgomery, to his cabinet as Postmaster General.”

In 1859, Blair built a rowhouse next to his for his daughter Elizabeth and her husband, Adm. Samuel Phillips Lee. Known as Lee House, it is now part of the Blair House complex. The U.S. government bought Blair House in 1942, not long after Eleanor Roosevelt intercepted British Prime Minister Winston Churchill at 3 a.m. as he walked toward the family’s private quarters in the White House seeking to speak with President Franklin D. Roosevelt. The president said Blair House would provide a much-needed space for diplomacy, particularly as America’s role in World War II expanded. 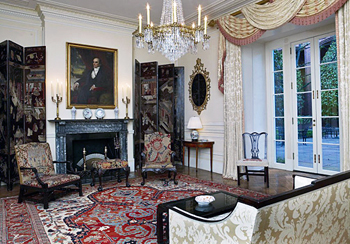 Providing a venue for diplomacy remains its role today. Run by the State Department, Blair House plays host to one to two guests per month, said Peter Selfridge, chief of protocol at State. For instance, last year, 14 or 15 foreign guests stayed there. “It’s really hard to settle in on an average because it really depends on the president, it depends on circumstances around the world,” Selfridge told us.

Blair House occupants have ranged from monarchs such as Britain’s Queen Elizabeth II, to presidents such as South Africa’s Nelson Mandela, to prime ministers such Russia’s Vladimir Putin. In addition to serving as a guest house, it is also the site of regular receptions and meetings, including “state of the administration” briefings for local diplomats hosted by the Protocol Office and a luncheon held for ambassadors following the presidential inauguration.

Guests stay two or three nights, depending on the purpose of their visit. Preparation for visits begins with initial planning meetings a week or two before the guests arrive. The staff then spends a couple of days readying the property, which has 109 rooms and a little more than 60,000 square feet of space.

When the White House underwent a major renovation from 1948 to 1952, President Harry Truman moved into Blair House and chose this room as his office.

“Even before those days of earnest prep, the advanced teams from the foreign delegation are coming through to look at it, we hold a number of prep meetings in the house [and] they start bringing in maybe equipment and other things,” Selfridge said.

Besides getting ready for guests, the house undergoes regular maintenance.

“Given that it’s almost 190 years old, it requires constant upkeep,” Selfridge said. “We’re constantly trying to keep up with modern times as far as putting in maybe new bathroom fixtures, upgrading the kitchens when we need to.”

The most recent major renovation involved structural work after the 2011 earthquake, and it features modern amenities such as internet access. The General Services Administration and State handle operational needs, such as plumbing and heating, but the rest falls to private funding.

U.S. Secretary of State John Kerry delivers remarks to members of Partners for a New Beginning at Blair House on May 3, 2013.

“If you set foot in Blair House, it’s this wonderful, beautiful place with almost museum-quality pieces on the walls and furniture pieces, and just like the White House, there are a lot of artifacts in there that are donated and then kept up by private funding through the Blair House Restoration Fund,” Selfridge said.

The restoration fund was established in 1985 as a charitable, tax-exempt, nonpartisan organization responsible for preserving and refreshing the furnishings, décor, fine arts and gardens. (The Blair House Restoration Fund and White House Historical Association are working on a new book about Blair House, which should come out later this year.)

Some of the décor includes paintings by U.S. presidents. Last year, the house announced it would add a donated oil painting by President George W. Bush titled “Bovines on the Brazos.”

“There are a few art pieces in there actually painted by U.S. presidents, which is really neat, and they’re not necessarily set out or displayed any differently than any other artwork, so it’s fun to walk through with our visitors and say, ‘This piece was painted by [Dwight] Eisenhower,’” Selfridge said. 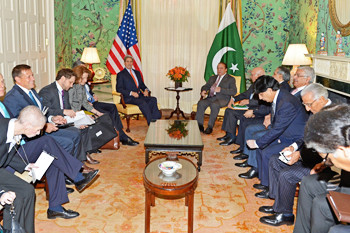 Other notable pieces include the last portrait painted of President Abraham Lincoln before his assassination, as well as a sketched drawing depicting a young Lincoln based on the first photograph ever taken of the 16th president. The library is home to over 1,500 books and includes books given as gifts by foreign delegations.

Historic events that happened at Blair House include Robert E. Lee’s declination of an offer from Blair to command the Union Army during the Civil War. Even though Lee opposed secession, the decorated Southern military officer became commander of the Confederate Army two days later.

More recently, President Obama hosted a health care summit at Blair House with congressional leaders in 2010, while then-Secretary of State Hillary Clinton welcomed G-8 foreign ministers there in 2012. Blair House has been the site of weddings (including Gen. William Tecumseh Sherman’s to Ellen Ewing in 1850) and serves as a residence for the family of a deceased former president during a state funeral (former first lady Nancy Reagan received visitors in the Truman Study during her husband’s funeral in 2004). 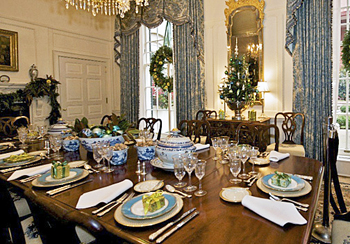 One of the most frequently used rooms in the Blair House complex, the Lee Dining Room is well-sized for luncheon meetings and formal dinners.

Blair House was known as the Truman White House because President Harry Truman lived there during a four-year renovation of the White House that began in 1948. An unsuccessful attempt was made on Truman’s life on Nov. 1, 1950, while he was living at Blair House. White House Police Officer Private Leslie Coffelt died fending off two Puerto Rican nationalists. Despite being shot several times, Coffelt was able to fire back and kill one of the attackers before succumbing to his wounds. He remains the only White House police officer ever killed in the line of duty; a memorial plaque commemorating Coffelt is affixed to Blair House’s front fence. Two years after the assassination attempt, Truman authorized a plebiscite to determine Puerto Rico’s status, with voters opting to remain a U.S. commonwealth.