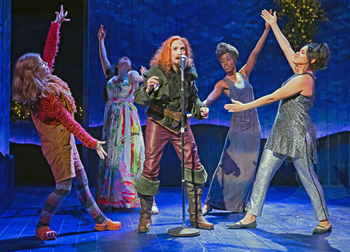 The Folger Theatre’s current production of “A Midsummer Night’s Dream” is a matchless, inspired invention that tickles the imagination. This is not your momma’s “Midsummer.” In this one, Puck rules the roost and has a crush on Oberon, the mismatched lovers are tormented youth from the Me Generation, and Bottom is an overzealous high school drama teacher.

Holly Twyford shines as Bottom in the Folger Theatre’s inspired rendition of “A Midsummer Night’s Dream.”

Four-time Helen Hayes Award winner Aaron Posner’s atypical interpretation and direction of this Bard staple comes during the Folger’s yearlong commemoration of the 400th anniversary of Shakespeare’s death. No pressure, right? It’s no wonder this production’s mantra is “sky’s the limit.”

“Midsummer” is one of Shakespeare’s earliest and best-loved comedies. It is jam-packed with the Bard’s signature wit, mistaken identity and an assortment of tangled lovers and mischievous fairies plotting and flirting against the backdrop of an enchanted forest. Taking a big risk with a well-worn classic is admirable and even apropos to celebrate the life of one of the boldest literary innovators of all time. Yet, there is a thin line between folly and hyperbole, and this production skates on that crack.

Nevertheless, for every bit of this play’s excesses, the acting chops are there to match them.

Let’s start with Puck, who usually doesn’t emerge until Act II. Here, Puck is reborn and enlarged as an androgynous female (played by the highly talented and spritely Erin Weaver, who happens to be married to Posner.) This merry wanderer of the night takes hold of the play from its start, scouring the aisles of the intimate Folger space, rapt with the audience (mortal playthings, to her). She wistfully sniffs patrons’ hair or gently caresses an occasional arm as she introduces the ensuing action. From the start, Puck can do no wrong, even as she turns romances upside down, makes fun of others’ confusion and heartache, and transforms a mortal into a donkey. Weaver throws her entire body into the role as she nimbly frolics, rolls over various surfaces, bounces off scenery and unsuccessfully tries to romantically ensnare her master and Fairy King Oberon for herself. 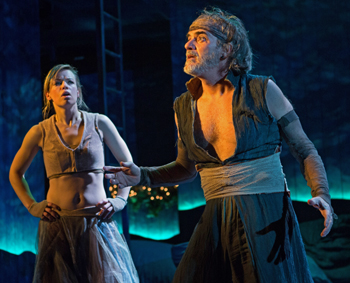 Next comes the drama of Egeus using Athenian law to demand that his daughter, Hermia, wed Demetrius, instead of Lysander (whose name you imagine she’s scribbled all over her diary with accompanying red hearts). King Theseus backs Egeus up, Lysander and Demetrius fight over Hermia, Hermia throws a fit and mayhem ensues. All of the love-inspired antics are done in 21st-century clothing, using a microphone in front of a cheering throng, on stage and in the aisles.

Betsy Mugavero makes a naively passionate Hermia. Adam Wesley Brown plays her humorously earnest (and ukulele-playing) boyfriend Lysander (does he think he’s Justin Bieber?). Desmond Bing is a smug rival for Hermia’s affections as Demetrius. And Kim Wong, who plays Helena, Demetrius’s love interest, comes out humming Adele’s heartsick “Someone Like You” and is amusingly dense to the term “he’s just not that into you.”

The whole of the cast, although top-notch, has been made a bit askew with the casting of Holly Twyford, a long-time and well-known D.C. thespian favorite, as Bottom, a minor, albeit notorious character. Twyford, of course, blossoms as a most lovable and uproarious nincompoop, who is part of an acting troupe planning a skit for the Duke and Queen’s wedding. But, through no fault of her own, she has the tendency to upstage the others and hijack the action. 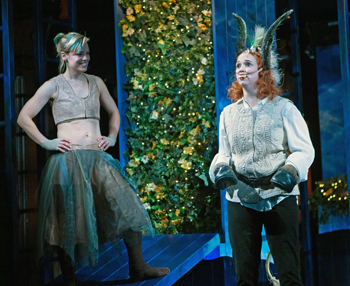 Erin Weaver gives a sprightly performance as the mischievous Puck.

Posner has fashioned those in the troupe, or “the mechanicals,” as an all-girls high school drama class with Bottom and Peter Quince (played by Richie Ruiz) as their teachers. Shakespeare wrote self-obsessed Bottom as comic relief who ends up with the head of an ass (thanks to fairy magic). Here, Bottom goes over the top, so to speak. Twyford lusciously milks her role as the over-inflated ego of a feverishly zealous drama school matron, who then turns into a braying and prancing donkey with cleft feet and paws. Bottom can’t get enough of herself and the audience can’t get enough of her. But maybe her spotlight shines too brightly in the context of this play.

Paige Hathaway’s set design is both stunning and simple. She creates a lustrous moon as a backdrop; mammoth pillows on which characters romp, tussle and sleep; and a high wooden perch from which Oberon and Puck gleefully watch their shenanigans unfold below. Devon Painter’s costumes are festive and fun, with Hippolyta in a brilliant dashiki; Puck in a flattering, midriff-baring pantsuit; and the acting troupe in plaid skirt and knee sock uniforms.

So what’s to complain about?

The only, but not insubstantial, problem with this production is that this rhetorical dream goes on for too long. When it’s time to wake up, somebody keeps hitting the snooze button and the cast goes into yet another round of song and dance. However, to be fair, as the good Lysander states, “The course of true love [and theater, in this case] never did run smooth.”