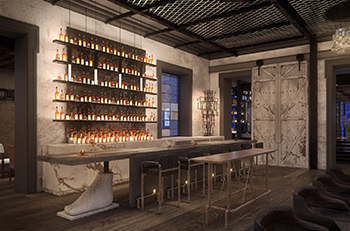 With the arrival of autumn, Washington’s booming restaurant and bar scene continues to reinvent itself, sometimes in new and novel ways and sometimes by more traditional means.

Dirty Habit, which opened in the site of the former Poste in Kimpton’s Hotel Monaco in Chinatown last month, brings a new look to a long-popular French bistro space that was in need of an update. Like Poste, Dirty Habit (first opened in San Francisco) is more of a place to get a drink and a bite than a dining destination. But discriminating diners will still find plenty to choose from.

The kitchen specializes in bar-centric, but globally influenced, seasonal cuisine. And the space is all seductive curves and colors, with a novel concept that aims to conjure the apocalyptic vibe of an insane asylum. Yes, an insane asylum. One of the banquet rooms even has padded walls. They’re luxurious, cream-colored padded walls, but still, padded walls. Since Dirty Habit is less than a mile from Capitol Hill, the private room could be just the place for edgier lobbyists and members of Congress to hatch one of their crazy deals. 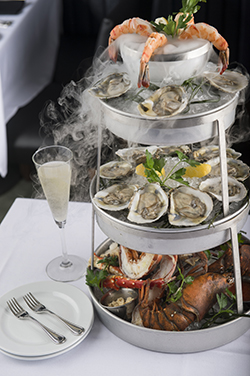 The smoking shellfish tower is among the seafood delicacies sure to make Ocean Prime D.C.’s newest power dining spot.

Seven blocks away, near the National Press Club and the White House in a spacious spot formerly inhabited by the Cuban powerhouse Ceiba, Ocean Prime now holds court.

Ocean Prime’s menu is, not surprisingly, filled with treasures from the sea, as well as prime cuts of meat. The restaurant’s menu and look are modern but still hew to the power dining formula that D.C. is famous for: lavish ingredients, subtle lighting, richly upholstered banquettes and a dapper wait staff. Ceiba’s once-cavernous design has been updated, in part by raising the floors to get rid of the former restaurant’s subterranean feel. The effect is a cozier space.

Eom’s eclectic vision includes such dishes as decadent duck and foie gras meatballs, lighter (and delicious) tempura calamari and guinea hen dumplings, inspired by a family recipe. Eom decided to keep a few mainstays from the old Poste menu, including the truffle fries and the crispy duck ravioli. Some starters include crispy calamari with jalapeño, pickles and a spicy remoulade, as well as fried chicken wings with peanut, chili and sweet and spicy sauce. If you’re hungrier, check out the duck breast with Meyer lemon-date puree, freekeh, barley and gochujang glaze, or braised short rib with house-made kimchi, pickled radish and sushi rice.

The space feels intimate but it’s actually quite large. Dirty Habit’s remote-controlled glass walls and expansive patio sleekly encompass an entire city block. Located across the street from the Verizon Center in the midst of vibrant Penn Quarter, Dirty Habit is designed to provide an ideal private urban hideaway.

If Dirty Habit’s clientele is a mix of slinky dresses and slim-cut suits, think power ties and expense accounts at Ocean Prime. It’s not formal dining per se, but the spacious and modern restaurant’s proximity to the White House and Treasury Department ensure its inclusion in the pantheon of D.C. power dining spots. 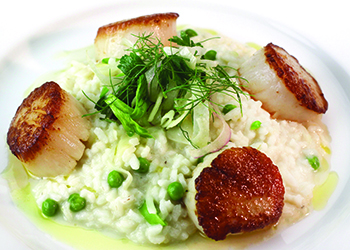 The Washington outpost is the latest in restaurateur Cameron Mitchell’s collection of Ocean Prime locations in 13 markets, including Boston, Beverly Hills, Philadelphia, Detroit, Dallas, Denver and others. 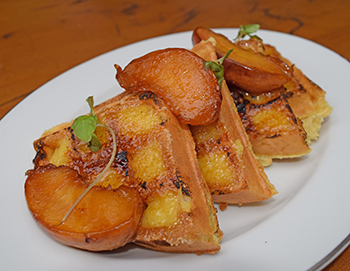 Waffle crème brûlée is among the decadent breakfast offerings at Blue Duck Tavern.

With 8,556 square feet, Ocean Prime boasts four private dining rooms and a lounge where can you catch a game on several televisions. Paintings by local artists can also be found throughout the space.

While Ocean Prime is the newest member of D.C.’s power lunch and dinner club, over in the West End, the Blue Duck Tavern in cementing its reputation as the city’s best place for a high-powered breakfast.

The contemporary neighborhood restaurant attached to the Park Hyatt is offering a dazzling autumn menu to start your busy day. Chef Brad Deboy, formerly of award-winning Vidalia, has created a smorgasbord of morning cuisine that evokes the flavors, and even the colors, of fall.

Sweet potato pancakes with cinnamon sugar pecans, roasted sweet potato, red wine-poached pears, shaved chocolate and sliced almonds is such a beautiful dish to behold you almost don’t want to eat it. But you’ll be glad you did.

Wanting something a little less sweet but maybe equally as indulgent? How about the fried chicken with leek soubise biscuit and an egg sunny-side up? Or a breakfast sandwich with egg raclette and maple-glazed bacon on a soft flaky croissant?

The BDT benedict with rainbow trout, Brussels sprouts slaw and pumpernickel hollandaise is a slightly lighter, but no less satisfying, option. If you’re looking to take care of business early — over succulent food served on white linen tablecloths with gleaming silver coffee pots that allow you to admire your business partner’s cufflinks without staring — Blue Duck Tavern is the best spot in town.