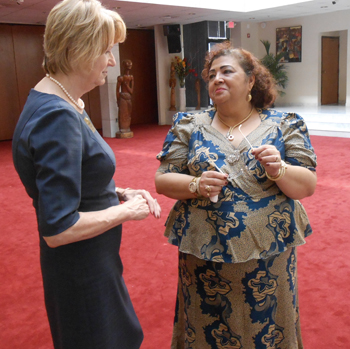 Photo: THIS for Diplomats

Douha Smith, wife of the Ghanaian ambassador and president of the Spouses of African Ambassadors Association, right, talks with Elizabeth Klass, president of THIS for Diplomats, a nonprofit that supports local diplomats and their families.

Africa is often described in monolithic terms, when in fact the continent is a tapestry of nations, ethnicities and religions. Sometimes its diversity surprises even Africans themselves.

“There are 54 countries in Africa,” said Douha Smith, the cheerful wife of retired Lt. Gen. Joseph Henry Smith, now Ghana’s ambassador in Washington. “Someone was talking about Lesotho and I said, ‘Where the heck is Lesotho?’ I thought, ‘I need to buy myself a map and read about all these other countries.’ I knew that would solidify the esprit de corps.”

Douha Smith is not only trying to learn more about the continent she calls home, but also come together with fellow Africans to network and learn how to better promote their respective nations in Washington.

Smith is now on her second term serving as president of the Spouses of African Ambassadors Association (SAAA). She joked that her D.C.-based group “sounds like an insurance company,” but said it does important work.

“SAAA’s purpose is to get to know other spouses, their ambassadors and their countries. We want to expose ourselves to Americans and have a cultural exchange each month among ourselves. The first exchange was to introduce each of our countries, the second one was a discussion of the different marriage traditions and the third was a ‘Taste of Africa, where we each brought and talked about a special dish that is served for festive occasions in our countries.”

Now, with a big map of Africa on her wall at home so she can pinpoint each country on the continent, Smith is revving up to make this a banner year for SAAA. With roughly 15 to 20 members, she would like the group to attract more wives. She is also proud that three members are men since their wives are the female ambassadors of Niger, Rwanda and Uganda.

She wants the group to be inclusive in terms of gender, nationality, ethnicity and religion. “Many of our countries have Christians,” noted Smith, who is Muslim herself. “Ghana has 25 percent Muslims and many traditionalists, not pagans.”

The multicultural West African nation of 25 million was once known as the Gold Coast when it was a British colony until it became the first sub-Sahara African nation to declare independence from European colonization in 1957. After several decades of coups and political turmoil, today Ghana enjoys relative stability and a growing free-market economy.

“We now have a direct flight from Dulles on South African Airlines that takes nine hours. We leave at night and arrive the next morning. It used to take us two days,” said Smith, who speaks English, Twi (a dialect of the Niger-Congo languages) and Arabic.

Throughout her husband’s military career and now in diplomacy, Smith has always been an avid volunteer. Her resume is three pages long. “Being a military wife in Ghana, they train you to be in leadership positions. As your husband moves up, you fall into the next position. You already know what to do,” she explained.

With her husband now officially retired from the country’s military, she has “graduated” to the Retired Officers’ Wives Association and is involved in that group when she’s back home. Here in the U.S., she enjoys working with THIS for Diplomats, a nonprofit volunteer organization housed in the Meridian International Center (and formerly known as the Hospitality and Information Service) that welcomes and assists diplomats and their families during their stays in Washington, D.C.

“Thirty years ago when my husband was defense attaché at the embassy here, I was a THIS advisory board member,” Smith recalled. Now, she is again introducing THIS members to Ghana and the Spouses of African Ambassadors Association.

“When I went home after that first time in Washington, my husband was made commander of the Southern Command. I had to organize the women. It was expected in the Armed Forces Wives Association. Many of the young ladies were doctors, lawyers and teachers and didn’t have too much time to volunteer.

“The Americans I have met have been very, very nice,” she added. “They say, ‘I want to know more about your country.’ For me, it is a pride and an honor to promote my country to the rest of the world.”

But the nomadic life of a diplomat has taken its toll on this mother of two grown sons. “When we first arrived in October 2014, I realized I was getting depressed,” confessed Smith, who had been president of the United Way Ghana before coming to Washington.

“I love to sew and I realized I had no sewing machine. At home, I’m in the business of sewing machines,” she said, noting that since 2001, she has been the sole agent for Bernina Sewing Machines in Ghana and West Africa. When she returns to Ghana, Smith said she’d like to start her own charity or even a dressmaking factory.

“I make my own clothes and I love G Street Fabrics. If the boys’ shirts didn’t fit, I ended up tailoring them. I sewed almost all their clothes until they became teenagers and fussy.” 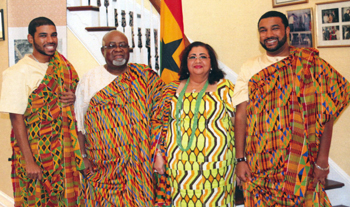 Douha Smith is pictured with her husband, Ambassador of Ghana Joseph Henry Smith, and their two sons Helel and Abdallah.

Smith said it was important to instill in her sons the understanding that they would not receive any special treatment because of their father’s status. “We wanted them treated like all the other kids. We did not want them saying, ‘My father is the lieutenant general or the ambassador.'”

Today, Helel is 30 and received his bachelor’s degree in psychology from Washington College in Chestertown, Md., and a master’s in disaster trauma from the University of Denver. He is back in Ghana with a film production company he created. “It’s a headache for me,” Smith joked, “because I don’t know yet what he is really going to do. He came to see us for two months this summer.”

Abdallah is 26 and studied political science at Clark University before receiving his master’s in Sweden. “He could only get away for two weeks this past summer,” Smith noted sadly.

“I do miss the weather at home. It’s hot and humid but the sun shines every day,” she said. “I miss so many members of my family and friends. I am a family person. And I’ve had some of the same friends from 35 years ago. I also miss just being a ‘normal’ person.”

Smith said she prefers the simpler life and doing ordinary things with her husband.

“Here, I go out on my own. I do my own shopping and I drive. Some ambassadors have a driver, a cook, a gardener and house help. We only have a cook and my husband’s personal assistant. On the weekends, my husband and I have a day out together — no driver, just us.”

Her husband has plenty of experience chauffeuring her around — in fact, it’s how they met. Over 30 years ago back in Ghana, Smith was trying to hail a cab after work when “this well-dressed man drove up and offered me a ride home. Of course I said no. He recognized me but I didn’t recognize him. And then he asked again and said, ‘I know your uncle and where you live.'”

Smith’s father had passed away at a young age and her uncle had become a father figure in her life. She relented after the man repeatedly told her details about her family and finally accepted the ride.

Later that night, her uncle explained that he did in fact know the man, who was rising through the army ranks, and that she had actually met him once before when she was much younger. “He showed up the next day at work and drove me home. I knew right away that I would marry him. In the car, magic happened. After that, he had a habit of picking me up every day. We also would sneak out and get away from my uncle.”

Smith did eventually marry the young man, who went on to have a distinguished 39-year career in the military, including serving as commander of Ghana’s Army from 1996 to 2001, during which time he worked to build a modern corps with a focus on civil and academic education for his officers.

While discipline was the hallmark of Joseph Smith’s military career, Douha Smith is jovial and good-natured with a sly sense of humor about being married to a military man, who sometimes needs to be put in his place, she quipped.

“My husband is a well-disciplined gentleman who takes his work very seriously. He works long hours [and] cares about people, not about himself. But when we came back to a new house in Ghana after being here [in D.C. in the late 1980s and early ’90s], he started to give me orders at home. I told him that I was the only civilian in the house and he has to take orders from me. I tried to let him know that the house was mine,” she recalled, laughing. “One time when I knew he was coming home, I locked the gate. When he couldn’t get in I said, ‘That’s where your command ends and mine begins.'”