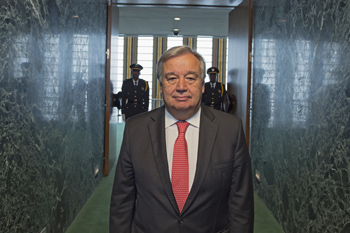 Like the United States, the United Nations started the new year off with a new leader. António Guterres, a former Portuguese prime minister and top refugee official, inherits a world of problems — from economic inequality to mass migration to climate change — on top of a potentially adversarial relationship with a Republican administration that may thwart his efforts to address those problems.

António Guterres makes his way to the 71st session of the U.N. General Assembly on Oct. 13 following his appointment as the ninth secretary-general of the United Nations.

Guterres was not initially among the frontrunners for the secretary-general job to replace South Korea’s Ban Ki-moon, who stepped down after 10 years. Many observers, including Ban himself, expressed hope that the position would go to a woman, which would have been a first in the world body’s 70-year history. Others thought it might go to an Eastern European, a region that has never produced a secretary-general. But after a series of anonymous straw polls, on Oct. 5, the U.N. Security Council announced it had selected Guterres for the role after being impressed at his public hearing and by his record as U.N. high commissioner for refugees.

“It’s the first time we have a new U.N. secretary-general and president take office,” said Kathy Calvin, president and chief executive officer of the United Nations Foundation. “António Guterres is the first prime minister to serve as secretary-general and he has incredible skills. He led a U.N. agency for over 10 years in troubling and challenging times. He knows the institution well.”

As U.N. chief, Guterres will serve a five-year term in which he will face a litany of pressing international challenges. The crisis in Syria has cycled through various U.N. special envoys in recent years; China’s territorial disputes in the South China Sea could exacerbate tensions with regional rivals; and Israel’s settlements and the claims by Congress that it will move the U.S. Embassy to Jerusalem could further spark instability in a region already plagued with turmoil and extremism, from Afghanistan to Yemen.

“Guterres is a canny diplomat who wants to get stuck into managing some of the major crises on the U.N. agenda,” Richard Gowan, senior policy fellow at the European Council on Foreign Relations, told The Diplomat.

“He is going to be a much greater activist than Ban Ki-moon, and may well spend more time in the world’s trouble-spots trying to negotiate peace,” Gowan added. “U.N. officials say that they can already feel a difference at the organization’s headquarters. As a former prime minister, Guterres is a demanding boss and wants the U.N. bureaucracy to be faster and more united than it was under Ban. But he’s also got natural charisma and has made a very good impression by speaking frankly with staff in public meetings. U.N. insiders feel some new energy.” 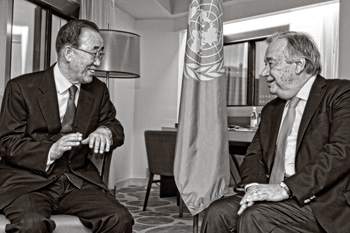 One of the biggest obstacles, though, could be the election of Donald Trump and a new bill in Congress that is threatening to take away U.S. funding to the U.N., which makes up 22 percent of the total budget.

Likewise, Trump’s pick for ambassador to the U.N., former South Carolina Gov. Nikki Haley, has questioned the U.N.’s effectiveness. At her Jan. 18 confirmation hearing, Haley said she would “leverage” U.S. funding to improve the world body and slammed it for “its bias against our close ally Israel.” At the same time, Haley dismissed the idea of outright “slashing” U.N. funding and disagreed with several key Trump positions. Unlike Trump, for instance, she accused Russia of war crimes in Syria, praised the NATO alliance and ruled out a national registry of Muslims.

“Nobody knows how Guterres will handle the Trump administration,” Gowan said. “If the U.S. turns against the U.N. in a big way, he will be on the defensive.”

America’s new Republican president could derail key diplomatic achievements. For example, Trump, who has called climate change a hoax perpetrated by China, could ignore the landmark U.N. agreement reached in Paris in December 2015 to curb greenhouse gas emissions. The former business mogul has also signaled his intention to severely restrict immigration to the U.S. from Muslims, Mexicans and other groups, all while the U.N. grapples with a worldwide refugee crisis. Trump has also vowed to undo Barack Obama’s rapprochement with Cuba and Iran despite widespread global support for the outreach. And Trump — who has called for a return to waterboarding and killing the families of terrorists — stands in stark contrast to Guterres, who is widely viewed as a champion of human rights.

It all adds up to a possible collision course at Turtle Bay, where the U.N. Headquarters stands not far from the gilded Trump Tower.

“Among the many foreign policy uncertainties created by Donald Trump’s election, there is one prediction we can take to the bank: The United Nations is going to get hammered,” wrote Council on Foreign Relations fellow Stewart Patrick for CNN last December. 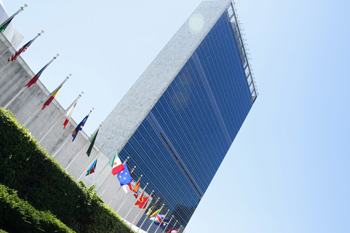 The flags of the 193 member states of the United Nations fly outside the world body’s headquarters in New York.

“The U.S.-U.N. relationship is fraught in the best of times — during the George W. Bush administration when the U.S. imposed a unilateral vision globally, or during the 1990s, when Sen. Jesse Helms bedeviled the United Nations and created a financial crisis at the institution by withholding U.S. dues. Conservative critics, both in and outside government, regularly scapegoat the U.N. for the failures of its member states. And because it lacks a domestic constituency, it is an irresistible target for nationalist demagogues,” Patrick argued.

To counter Trump’s own nationalist tendencies, Patrick suggested that Guterres pledge to make the bureaucracy leaner and more transparent while delivering a practical message to the businessman and his inner circle: “Regardless of the international organization’s many flaws, the United States will return again and again to the United Nations — just as it did under George W. Bush — to get things done,” Patrick wrote.

If anybody is up to that task, it could be Guterres.

As refugee commissioner, “he was able to not only work with the major powers but to nudge — sometimes push — them to go where they might otherwise have not. This is a skill that should come in very handy in his new role,” wrote Adil Najam, dean of the Frederick S. Pardee School of Global Studies at Boston University, in the Conversation.

“He’s likely to focus on dialogue and not afraid to role up his sleeves,” said Calvin of the U.N. Foundation. “His style is more about engagement, and engaging leadership with a new administration to turn over in the U.S. and the U.N., there is the opportunity to strengthen the relationship.”

Guterres, 67, has said he is ready to work with the new administration, while hinting that he won’t be driven by fear or demagoguery.

“We want the world our children inherit to be defined by the values enshrined in the U.N. Charter: peace, justice, respect, human rights, tolerance and solidarity,” Guterres declared during his swearing-in. “But the threats to these values are most often based on fear. Our duty to the peoples we serve is to work together to move from fear of each other, to trust in each other. Trust in the values that bind us, and trust in the institutions that serve and protect us.” 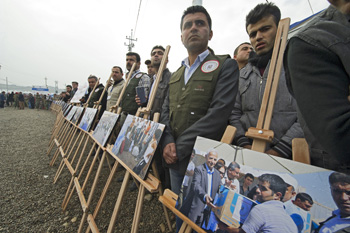 U.N. leaders, including U.N. High Commissioner for Refugees António Guterres, visit the Kawrgosik refugee camp near Erbil in the Kurdistan region of Iraq in 2014. Guterres has been outspoken advocate for more international assistance to the millions of refugees displaced by Syria’s civil war.

Born in Lisbon, Portugal, Guterres excelled in school before going into academia. He speaks four languages (English, French, Spanish and Portuguese). His early years were spent under the watchful eyes of dictatorship and he spent extended periods in the countryside, where he grew to sympathize with the struggles of poverty. He studied physics and electrical engineering before teaching systems theory and telecommunications signals.

In 1974, Guterres set academia aside and began a professional career in politics with Portugal’s Socialist Party. In 1976, he became a Socialist MP in the Portuguese Parliament, where his oratory skills earned him the nickname “the talking pickaxe.”

A wily political operative, he became secretary-general of his party in 1992, but unlike other traditional socialists with Marxist backgrounds, Guterres is a devout Catholic. His faith “always informed his brand of social democratic politics,” wrote Angelique Chrisafis and Julian Borger in the Guardian on Jan. 1.

As party leader, Guterres emphasized consensus and compromise, forming policy by meeting with public intellectuals, scientists and entrepreneurs from across the political spectrum. “In 2000, when Portugal took the rotating presidency of the European Union, its success was attributed to Guterres’s ability to get big leaders to agree and smaller leaders to be heard,” the Guardian noted.

He served two terms as Portugal’s prime minister but resigned part way through his second term after his minority government was trounced at the polls in 2002.

“He never allowed a journalist to go with him or let himself be filmed or photographed, and he never let journalists talk to any of his students,” Ricardo Costa, editor-in-chief of the Portuguese SIC News, told the Guardian.

Guterres eventually turned his attention to international diplomacy and was elected U.N. High Commissioner for Refugees in 2005. He kept the position for 10 years, during which time he was confronted with the highest level of global displacement since World War II. 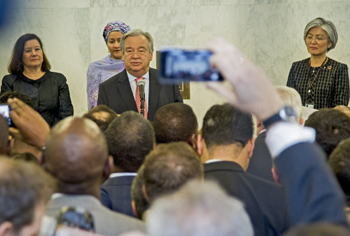 On his first day at work, António Guterres, the new U.N. secretary-general, laid a wreath in honor of U.N. staff fallen in the line of duty and addressed staff members gathered to welcome him on Jan. 3, 2017. Also pictured are, from left: Maria Luiza Ribeiro Viotti, chef de cabinet to the secretary-general; Deputy Secretary-General Amina J. Mohammed; and Kyung-wha Kang, the secretary-general’s special advisor on policy.

During his tenure, he called for better treatment of refugees by European nations and worked tirelessly to secure funding for Syrian refugees in particular. He also improved UNHCR’s capacity to respond to crises while trimming overhead. In fact, he oversaw the most significant structural reform process in the agency’s history.

“The Security Council faces challenges with Russia’s veto and support for the Syria regime. But without the humanitarian agencies, we wouldn’t have as much knowledge or unified support in any of the world’s countries,” Calvin said. “He will be a leader focused on early intervention and anticipation and building resilience.”

Upon being sworn in as the ninth secretary-general, Guterres pledged to continue his focus on reforming the U.N. bureaucracy, in addition to promoting peace and sustainable development.

“Humanitarian response, sustainable development and sustaining peace are three sides of the same triangle,” he said.

He also vowed to improve staff and budgetary rules to ensure accountability and efficiency, while tackling gender disparity in the world body (a recent analysis found that women held just over 20 percent of the top jobs in the U.N. Secretariat).

“The United Nations needs to be nimble, efficient and effective. It must focus more on delivery and less on process; more on people and less on bureaucracy,” he said last December before the 193-member U.N. General Assembly.

“We live in a complex world. The United Nations cannot succeed alone. Partnership must continue to be at the heart of our strategy,” he added. “Our most serious shortcoming — and here I refer to the entire international community — is our inability to prevent crises. The United Nations was born from war. Today we must be here for peace.”