Home The Washington Diplomat February 2017 ‘To the Secretary’ Illustrates Importance of Diplomats, and American Disconnect 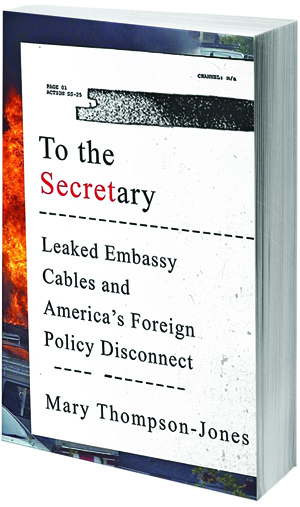 Among President Donald Trump’s various interests, the art of diplomacy does not appear to be near the top of the list. During his 2016 presidential campaign, Trump spoke about foreign policy in broad strokes and often crude terms, focusing on personalities and brandishing sweeping, sometimes highly inaccurate generalizations. A far more complicated world than he described, or probably even imagined, awaits him.

If Trump (or his future secretary of state) is interested in learning about diplomacy, he should read “To the Secretary: Leaked Embassy Cables and America’s Foreign Policy Disconnect” by Mary Thompson-Jones. She was a career American diplomat for 23 years and is now the director of the global studies and international relations program at Northeastern University.

The premise of her book is that the release of more than 250,000 State Department cables by WikiLeaks in 2010 was an embarrassment for the United States but unwittingly highlighted what American diplomats do and how important they are. “In some ways, the leaked cables did U.S. diplomats a favor,” she writes. “They brought to light the importance of their role and their descriptive powers and offered glimpses of the fascinating backdrop against which they work. The U.S. government may have been embarrassed by candid descriptions of world leaders, but the cables reveal diplomats who are eager to interpret people and developments on the world stage for bosses back in Washington.”

Most of the cables released by WikiLeaks were written between Jan. 1, 2006, and Feb. 28, 2010, and originated from U.S. embassies and consulates. Thompson-Jones has examined this trove, organized the cables thematically and uses them to describe the critical role of diplomacy and diplomats.

Before plunging into the cables, Thompson-Jones provides a primer on America’s diplomatic structure. She notes that in 2015, the State Department employed about 73,000 people and of these, 7,900 were Foreign Service Officers. FSOs typically choose a career in one of five areas: administration, public diplomacy, political, consular or economic affairs. At any given time, about a third of all Foreign Service Officers are assigned to Washington and the rest are stationed overseas for tours that typically extend for two or three years. Between 65 percent and 70 percent of American ambassadors are Foreign Service Officers and the rest are political appointees.

American diplomats sent almost 2.5 million cables between 2006 and 2010, and they fall into three broad categories: unclassified, confidential and secret. “Officers tend to overclassify on the theory that a secret cable will get more attention in Washington than a confidential one, and a cable marked unclassified must not say anything important,” she writes.

Thompson-Jones describes several types of cables: official updates, scene setters, biographical profiles, spot reports, daily media reaction and situation reports. “Knowing by instinct when and what to communicate back home is what makes a good diplomat,” she writes. “Their reporting must walk a line between loyally carrying out assignments from Washington, while making essential, sometimes contradictory, points to a foreign policy establishment that does not always want to hear them.”

The WikiLeaks cables showed that American diplomats are interested in a wide range of topics, some of which were specific to the challenges of the 2006-2010 period and some of which reflect perennial issues diplomats confront. She also illustrates her argument that stakeholders in Washington, often with their own varying agendas, are disconnected from the realities on the ground that diplomats in the field encounter.

Especially after the Sept. 11, 2001, terrorist attacks, U.S. diplomats frequently wrote about anti-Americanism and suggested ways to respond to it or, ideally, prevent it. Officials in Washington struggled to understand the reasons for these hostile feelings. Thompson-Jones points out that more than 30 task forces and special panels have been convened to study this phenomenon and offer recommendations. She says there tends to be a disagreement between those in Washington who think the solution is better communications and messaging strategies and diplomats on the ground who believe American policies are the problem. She quotes the trenchant assessment of an American diplomat, Richard Arndt, who concluded that “policy is not just A factor; it is the ONLY factor” in understanding anti-Americanism.

Thompson-Jones believes one cause for anger at the United States is the raft of reports mandated by Congress in which the American government ranks other nations on such matters as human rights, religious freedom and counter-narcotics. Not surprisingly, many countries find such rankings condescending, judgmental and even hypocritical. As an example, she says the International Religious Freedom Report is a “blunt tool with a rigid format that does not allow for context.”

Diplomats also sent cables that offered vivid accounts of coups, cranky leaders, natural disasters and economic crises that occurred in their host nations. She describes cables from Haiti after the 2010 earthquake; from Myanmar after Cyclone Nargis; from Honduras in the aftermath of a 2009 coup; and from Iceland in the wake of the 2008 economic crisis and the collapse of that country’s banks.

Some of the cables are terse and factual while others are expansive and prescriptive, such as this one from a U.S. diplomat in Iceland: “Iceland is reaching out with increasing desperation to any available source of help as it confronts one of the most trying crises in its history. Assistance from the U.S. at this crucial time would be a prudent investment in our national security and economic well being. The Icelanders take fierce pride in their flawless history of paying back their debts. Whatever the financial turmoil and uncertainty of the moment, it’s a good bet that this economy of highly educated, imaginative and sophisticated people will take off again. And when it does, and when the competition in the High North really gets underway, it may be more important than we can yet suppose to have the Icelanders remember us as the kind of friend who stands by in fair weather and foul.”

Enterprising American diplomats, Thompson-Jones says, left the comfort of their embassies to explore their host nations and observe how cultural traditions can be more important than political ideology. People are often influenced more by religion, geography and ethnicity than loyalty to their nation states. 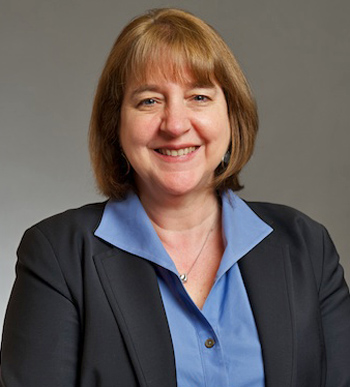 “On occasion, the view from the village may matter more than the view from the corridors of power. Ignoring that view will leave the United States at risk,” she writes. Thompson-Jones cites the example of a diplomat who dispensed with abstract ruminations about Islam and instead went to Mecca, performed the Hajj and wrote powerfully about his pilgrimage. She delights in a cable written by three diplomats in Suriname who nonchalantly mentioned that they traveled for four days by dugout canoe down the Tapanahoni and Marowijne rivers to visit a remote village.

Diplomats, of course, also write about people — and the best envoys seek out not only other diplomats, but also politicians, artists, civic leaders, academics, labor officials and students. They attend plays, watch films, listen to lectures, read newspapers, monitor social media and seek out nontraditional voices. “People who disagree with the administration in Washington often are not inconsequential,” Thompson-Jones observes.

In one of the book’s most intriguing chapters, Thompson-Jones describes several thousand cables that relate to wildlife hunting, poaching, illicit trade and endangered habitats. They depict the travails of lions, apes, elephants, rhinos, tigers, leopards, cheetahs and whales. This focus is new, reflecting the huge financial stakes in the trafficking and preservation of wildlife and the growing role of powerful international nongovernmental organizations that are passionate about this challenge. “No one worried about wildlife in George Kennan’s time,” she writes wryly.

Diplomats also wrote extensively about corruption because these stories are often salacious and compelling, but also because corruption is a serious impediment to economic development and foreign investment.

Thompson-Jones cites cables describing corruption in elections, procurement and organized crime. While embassies reported extensively on corruption, their colleagues in Washington did not always seem interested. Evidence of graft among reliable allies complicates American foreign policy. What should America do when steadfast supporters are also shown to be plundering their own people?

Sometimes, good intentions come up against hard realities. American diplomats serving in the massive U.S. Embassy in Baghdad between 2006 and 2010 wrote extensively about their efforts to help rebuild that war-ravaged nation. Thompson-Jones describes the diligent efforts of diplomats to help Iraqis resurrect institutions and revive communities. She was struck by the gap between the intensity of America’s effort and its scant long-term accomplishments, noting that “few imagined that such a massive investment could be undone so quickly and the earnest work of thousands of Americans and coalition partners would leave so little lasting impact.”

In her final chapter, Thompson-Jones focuses on Hillary Clinton, both because her tenure as secretary of state is interesting and also because she seemed poised to be the next U.S. president when the book went to print.

Thompson-Jones reviews thousands of cables during Clinton’s time as secretary of state as well as some of the 55,000 pages of emails found on her personal server. She says they depict Clinton as a solid diplomatic practitioner, but not a strategic foreign policy thinker.

Clinton worked hard, traveled extensively and was willing to engage overseas audiences in creative ways to tell America’s story. But Clinton did not register many high-level successes, Thompson-Jones concludes, arguing that she focused on second-tier issues such as Myanmar, the Asian pivot, the Internet Freedom agenda, the State Department’s first Quadrennial Diplomacy and Development Review and women’s issues.

Additionally, she was constrained by the Obama administration’s appointment of more than 20 special envoys, representatives, advisers and coordinators. This undermined Clinton and led to a further compartmentalization of foreign policy. Thompson-Jones chides Clinton for accepting this intrusion on her turf. “It is hard to imagine some of her predecessors meekly agreeing to so many oft-called baronies.”

One of the most striking themes to emerge in “To the Secretary” is the disconnect between diplomats in the field and their bosses at home. Thompson-Jones says that while Washington’s foreign policy community held elaborate debates on the merits of soft power, smart power and transformational diplomacy, diplomats in the field were frantically scrambling to deal with a cascade of difficult problems.

“In retrospect, all the speeches, articles and debates in Washington and the foreign policy think tanks about whether U.S. foreign policy should be soft, smart or transformational seem almost irrelevant when set against the incredible challenges diplomats faced in many of the countries mentioned,” she writes.

Thompson-Jones concludes her book with a plea for State Department leaders to listen more closely to those overseas and for envoys to continue to write substantive, vivid and illuminating cables, even in era dominated by cable TV and and social media. “Cable writing is thoughtful and reflective — a cross between reporting and essay writing…. Diplomacy is still an art, as is good writing. The act of thoughtful and reflective writing about diplomacy surely ought to endure.”

“To the Secretary” is a superb book that makes a powerful case for the role and relevance of diplomacy in a changing world. Mr. Trump: Set aside your Twitter feed for one weekend and read this book.