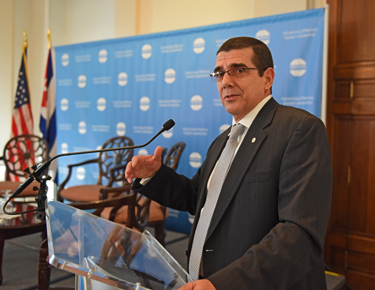 The United States has “moved beyond” the debate over whether it’s time to improve relations with Cuba. With diplomatic ties already a fact of life, the urgency now is deepening that relationship through economic and cultural exchange — and ending the trade embargo that has defined U.S. policy toward the island for the last 55 years.

So says José Ramón Cabañas, Havana’s man in Washington since 2012.

For most of that time, Cabañas was chief of the Cuban Interests Section, officially an annex of the Swiss Embassy. But on Sept. 17, 2015, Cabañas presented his credentials to President Obama as Cuba’s first full-fledged ambassador to the United States in more than half a century, following the restoration of those ties nine months earlier.

“It’s no secret that most Americans support a better relationship with Cuba. It’s the same thing from our end,” said Cabañas, addressing the Meridian International Center’s half-day Cultural Diplomacy Forum on Cuba. His June 9 speech came roughly a month after the first U.S. cruise ship in 50 years set sail from Miami to Havana, and one day before the Department of Transportation cleared half a dozen U.S. airlines for takeoff to nine Cuban destinations.

“At the diplomatic level, every other day we have something new, or another round of talks. We have so many initiatives from companies large and small that we are thinking of forming an economic steering committee,” Cabañas said. “When you have such a large demand, you have to make priorities. You cannot deal with everything at once.” 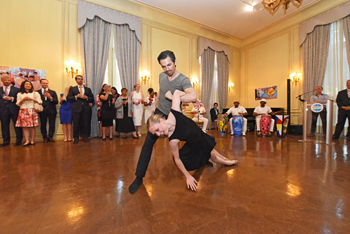 The fact that Meridian’s Cuba event — underwritten by former banker Adrienne Arsht and agribusiness giant Caterpillar — attracted a standing-room only crowd underscores the intense interest in an island that has fascinated Americans for decades.

Since Obama’s groundbreaking two-day trip there last March, that interest has surged, said Cabañas, who was introduced by Meridian President and CEO Stuart Holliday as “probably the most popular ambassador in Washington right now.”

About 161,000 U.S. citizens of non-Cuban origin traveled to the island in 2015, and arrivals in the first half of 2016 are already up 94 percent, said Cabañas. That follows a significant relaxation of U.S. regulations that for years made it next to impossible for average Americans to visit this tropical paradise only 90 miles from Florida’s shores.

“How many will go this year, I don’t know. But it puts a lot of pressure on agencies, authorities and institutions that must respond to their demands,” said Cabañas. “We are doing things the way Cubans do things: upside down. It will take awhile, but after people have waited for so many years to have that freedom to travel to Cuba, we cannot say, ‘Let’s wait until we have the infrastructure.’ We welcome visitors now.”

This new Yankee invasion still represents a tiny fraction of the 3.5 million tourists expected to vacation in Cuba this year, one-third of them Canadians. Moreover, Americans still cannot travel to Cuba strictly as tourists; their visit has to fall under one of 12 categories, such as educational, religious, family or humanitarian purposes. 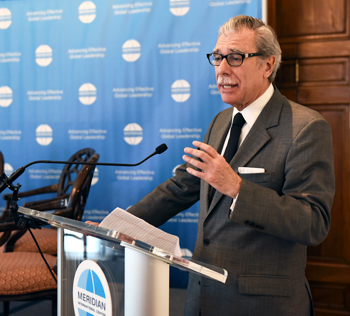 But the U.S. market is by far the most important one in the world for Cuba, and once all restrictions are formally lifted, millions of Americans will undoubtedly flood the island — lured by Cuba’s colonial architecture, white-sand beaches, cigar factories, salsa music and a rolling museum of colorful, pre-embargo Fords, Chevys, Buicks and Plymouths from the 1940s and 1950s that can be found nowhere else on Earth.

At the moment, said Cabañas, the U.S. and Cuban governments are negotiating agreements on 18 subjects ranging from law enforcement to marine conservation.

“We have signed nine memoranda of understanding on specific areas like civil aviation that we have to implement,” he said, noting the nonstop flurry of Cuban officials streaming to Washington ever since the Cuban flag went up over the country’s mission on 16th Street, NW, for the first time since 1954.

Since then, a number of state and municipal officials including Virginia Gov. Terry McAuliffe and D.C. Mayor Muriel Bowser have brought delegations to Cuba, looking to expand trade and investment opportunities. While it’s easier than ever to visit the island these days, the trade embargo itself is still very much in place — and because of the 1996 Helms-Burton Act, only Congress can revoke those sanctions. 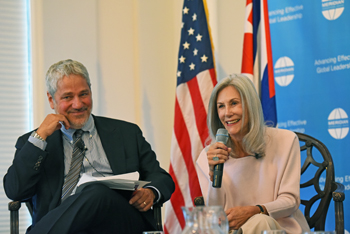 Yet while Democrats and Republicans may not agree on much this presidential election season, one thing both sides seem to support is an end to those anti-Cuba sanctions that have accomplished virtually nothing in the past 55 years, except maybe to shut out U.S. companies from a potential market of 11 million consumers.

“It’s very difficult, if not impossible, to tell a U.S. businessman that the Cuban market is forbidden,” said Cabañas. “People are knowledgeable about the new Cuban legal framework, and they simply want to be part of that. And it’s difficult to tell port authorities in South Florida not to look to the port of Mariel, especially now that the Panama Canal is being expanded.”

Cabañas said that as chief of the Cuban Interests Section and now the Cuban Embassy, he’s had the chance to visit many cities across the United States, including South Florida — home to a thriving community of more than a million Cuban exiles.

“I can tell you that young people have a lot of expectations, and they don’t care about the embargo,” he said, urging Congress to “support the end of sanctions” against his country that have caused untold suffering and cost the Cuban economy billions of dollars since its inception in 1962. 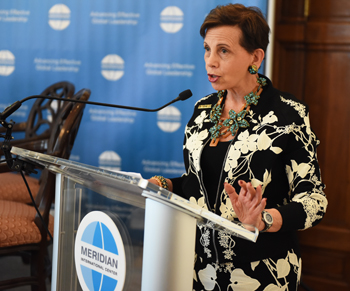 Adrienne Arsht, executive vice chairman of the Atlantic Council, said that when she lived in Miami for 10 years, she witnessed a shift in attitudes among Cuban exiles who increasingly favor closer ties with their estranged homeland.

Noting the large numbers of executives from Caterpillar and other Fortune 500 companies in his audience hoping to do business in Cuba, Cabañas counseled patience: “My only advice to you is don’t be in a rush. We Cubans do business in our own tropical way — a nice mix of mojitos and good cigars — and in many cases it takes awhile.”

Adrienne Arsht, a wealthy businesswomen and philanthropist who encouraged the Atlantic Council to establish a Latin America Center that now bears her name, said her 10 years living in Miami gave her a unique perspective on people’s changing attitudes toward Cuba.

“What is so exciting today is how Cuban exiles — many of whom were born in Miami hospitals — have changed on a dime and now want to go back,” she said. “They want to make up for lost time.”

One such exile is Carlos Gutierrez, chairman of the Meridian International Center and former U.S. secretary of commerce. Long a fierce opponent of the Castro regime, Gutierrez today is one of the loudest voices in Washington calling for an end to the embargo — as well as Cuba’s reintegration into the world economy and admission to global financial institutions such as the World Bank, Inter-American Development Bank and International Monetary Fund.

“Many of us have been involved in trying to take U.S. businesses to Cuba,” said Gutierrez. “But now we need to lift our expectations and have not just a transactional relationship where we sit down and negotiate. Why don’t we shoot for being great friends? It’s hard to have a friendship without understanding history, values and customs. There’s nothing like culture to help each country walk in the other’s shoes.”