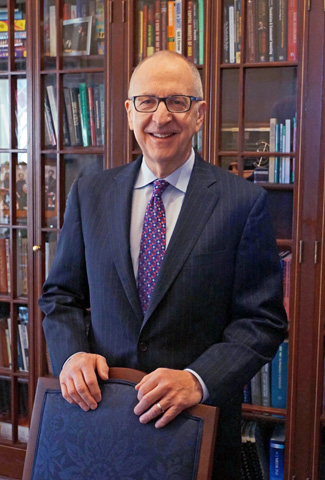 When David Skorton took over as the 13th secretary of the Smithsonian Institution a year ago, he arrived with an impressive resume, a reputation as a prodigious fundraiser and, according to him, not much knowledge about the institution or its global reach.

A board-certified cardiologist and accomplished jazz saxophonist, Skorton had spent the previous decade as president of Cornell University, where he raised $5 billion and led a successful effort to build a new applied sciences campus in New York City. A pioneer in applying computer analysis and processing techniques to cardiac imaging, he is the first physician to lead the Smithsonian.

In a recent Diplomat interview in his office at the famous Smithsonian Castle on the National Mall, Skorton said he’s spent much of his time getting to know the institution better and marveling at the depth and scope of its work in 145 different countries around the globe.

To say Skorton’s job is a big one is an understatement. As secretary, the affable physician oversees 19 Smithsonian museums and galleries, 20 libraries, the National Zoo and numerous research centers, including the Smithsonian Astrophysical Observatory and the Smithsonian Tropical Research Institute.

He’s also in charge of the institution’s $1.3 billion annual budget, as well as 6,500 employees and 6,300 volunteers. About 60 percent of the Smithsonian Institution’s budget is paid by taxpayers. The rest is generated from private contributions and business revenues. Twenty-eight million people visited Smithsonian museums and galleries last year alone.

Skorton told The Diplomat he is deeply committed to sustaining and even expanding the Smithsonian’s global outreach, and he encouraged Washington’s ambassadors to contact him about leveraging the institution’s vast resources for potential work in their own countries. The secretary also discussed the Smithsonian’s knack for steering clear of partisan politics, his commitment to the arts, proposals to begin charging admission to museums and the importance of diplomacy around the world.

The Washington Diplomat: How much did you know about the Smithsonian’s international reach before starting the job last year?

David Skorton: I knew very little about the Smithsonian when I was considering this amazing opportunity. What I knew about it primarily were these fabulous museums … and having this opportunity to see everything under the sun. I was not aware of the depth and breadth of the international activities. But I’ve had the good fortune to be involved in international activities throughout my academic career in medical projects in places as far away as Russia and Japan, to educational and research partnerships in Asia, Africa, Europe and elsewhere, including South Asia. So I was delighted when I found that, depending on when you take the count, we’re involved in perhaps as many as 145 countries around the world.

TWD: What kind of work could the Smithsonian possibly be doing in that many different places?

Skorton: Most of those are research projects that are initiated or continued by a particular scientist, art historian, anthropologist or archaeologist here, with a counterpart in another part of the world.

There is a great interest now in what people call cultural preservation around the world, whether cultural artifacts and heritage, or cultural memories that are endangered by natural catastrophes like the earthquake in Haiti or, unfortunately, purposeful destruction as we’ve seen in the Middle East and elsewhere. Especially since 2010 — since Haiti — we’ve been seen more and more as one of the go-to places by the State Department … in helping not only to directly preserve culture ourselves, as in Haiti, but also training our counterparts and exchanging ideas with people in other parts of the world.

Closely related to that cultural preservation is work that our Center for Folklife and Cultural Heritage does…. There is also an increasing desire to work with museum professionals around the world to just trade expertise. If you walk around the museums, you see evidence of these international partnerships.

TWD: How do you prioritize international projects?

Skorton: That’s a great question. There are really two approaches to this. One is to pound the table and say, ‘We’re now going to turn our attention to region X and we’re going to work there.’ That doesn’t work in organizations like this that are full of creative people and want to follow their hearts and minds where they want to go. The other approach is the let-a-thousand-flowers-bloom approach and that’s what goes on here. Individual people are empowered to bring opportunities to the table. We meet regularly with members of the diplomatic corps. Right after this meeting, we’re meeting with a delegation that wants to find out opportunities to work with us. I’m a real big believer in allowing a creative local freedom to do things. The way it works is an idea is brought up and support is sought for it. It’s evaluated for the likelihood we could actually do some good.

TWD: Are these decisions affected by international politics? For example, does the mood of Congress, which controls more than half your budget, factor into where international resources are directed?

Skorton: This organization is completely apolitical — you expect me to say that — but it really is. We do run into politics, especially in this area of cultural heritage preservation, but I’ve been hugely impressed … that they’ve stayed very apolitical and therefore they’ve gained the trust of institutions around the world.

Skorton: It’s a little intimidating (chuckles). My last interview was in [Chief Justice John Roberts’s] chamber on a Sunday afternoon. My wife asked me, ‘What are you going to talk about?’ and I said I don’t know. Whatever he says, I’m just going to say yes.

TWD: So, Congress stays out of your way and lets you do your job? That also might surprise people.

Skorton: The congressional part of it is bipartisan. They really allow us to do this as long as proper process is followed. So many American institutions have fallen off the curve in terms of the public trust. Forgive me if I mention the Fourth Estate [the media], Congress and so on. One of the highest-ranking areas in terms of trust is museums and libraries. It is way up there in the 70 and 80 percent range. People trust the information they get and they see museums and libraries as unbiased purveyors of information. We need to use that asset.

Skorton: One thing I’m going to try to do next year is convene some discussions on difficult topics. We won’t take a position but we’ll act as the convening party to bring folks together to talk about things and make those discussions open to the public for free and webcast it, using whatever technology to disseminate it. I think that will enable us to use that trust in a positive way. 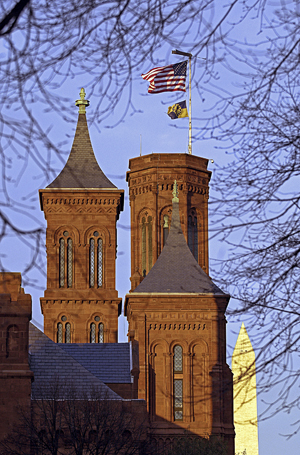 The Smithsonian Institution Building (i.e. the Castle) is seen against an early morning sunset with the Washington Monument in the background.

TWD: What would you say to ambassadors in Washington who would like to become more engaged with the Smithsonian or possibly explore partnerships?

Skorton: Send me an email … and I’ll get some people here organized who really know what they’re talking about. We have a wonderful database that if you name a country, it can generate a listing of what collections we have from that country, what objects are in that collection, what research projects we’re doing over there or jointly over here. If you want to give them one piece of advice, tell them to write me directly at skortond@si.edu.

TWD: That’s a pretty direct pipeline to the top.

Skorton: People who work with me hate when I do that because they know that I will quickly forward [an incoming email] to them. But I think we are a public-facing institution and we need to be open to the world.

TWD: You’ve developed quite a reputation as a fundraiser. You were prodigious at raising money as the president of Cornell, and in your previous job as president of the University of Iowa from 2003 to 2006. Is that part of your job here?

Skorton: My job is a matchmaking job. My job is to find out what assets we have that would be of interest to people with capacity [money] who are patriotic and want to participate. That’s also what I did at Cornell and the University of Iowa. The whole key to fundraising is finding that concurrence of interest. It’s very hard to sell something to someone if they are not interested.

[Take for instance the new National Museum of African American History and Culture, which opens in September.] When Obama was elected I thought, ‘Well, at the last years of this guy’s two terms — if he goes two terms — we’ll be on a descending level of race problems in this country.’ Unfortunately, we’re not even close. So I think it’s more important than ever to have that museum open. We found people of capacity who wanted to participate and it wasn’t just the African American community, although there was a lot of generosity there. It was corporate America, white philanthropists, raising a quarter of a billion dollars already, and more is on the way.

TWD: You come from a science discipline — medicine — but you have stated that you really want to focus on arts during your tenure as Smithsonian secretary. Why?

Skorton: I think it’s important because life and medicine and science have convinced me that our thorniest issues are not going to be solved by science alone. It’s necessary to have great scientific discoveries … but we have not done a good enough job as scientists of explaining to the public how things work. We have to do a better job of understanding communication and the whole breadth of things that come with humanistic disciplines. I think the arts and the humanities are where we understand human nature and what it means to be human.

Understandably, during a recession people want to spend money on things that look like they’ll have economic benefit. School districts across the country when things get tight say, ‘Let’s drop the arts program, the music program,’ because you can’t immediately identify that with a job opportunity five years hence. We do that at our peril. I think the country has to reinvest in it.

TWD: What is your position on the notion of implementing admission fees — even nominal ones — to the Smithsonian museums as a way to raise revenue?

Skorton: It will not happen while I’m secretary. There is always a concern about raising more revenue to do what we do. Congress has been immensely, astoundingly generous. During a recession we’ve had a flat appropriation in nominal dollars and that’s astounding, right? Given what could have happened, they could have knocked it down a lot, and they haven’t. I think it’s because the American public appreciates what my predecessors have done and what my colleagues are doing now.

TWD: Is there anything else you’d like to say to our readers, many of whom comprise the international and diplomatic community?

Skorton: I just want to say after working so much overseas that all of us in the world owe a debt of gratitude to the diplomatic core around the world at a difficult time when there is tension between societies and government. The professional diplomat is the way we reach out between cultures and try to make things work in ways that are not based on conflict. I am thankful for what they do every day.