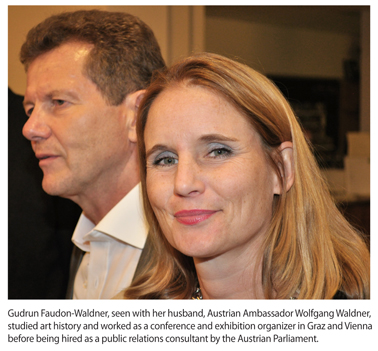 “The Sound of Music,” the iconic musical set in Salzburg, Austria, during World War II and starring Julie Andrews, is a favorite of Americans. But the story about the Von Trapp family is not well known in Austria. “Most Austrians never saw it,” said Gudrun Faudon-Waldner, wife of Austrian Ambassador Wolfgang Waldner. “I watched it for the first time when I was visiting my host family in Antioch, Calif., at the age of 15. ‘Edelweiss,’ the ‘national’ song they sing in the movie, is made up; No one can sing it at home; it’s not among the songs we know. I like the movie — it’s beautiful — but it’s made in the U.S.”

Not that she’s complaining. Faudon-Waldner was eager to see the U.S. the first chance she got. “My father asked me if I wanted to go to the U.K. or the United States to improve my English and I said United States, of course,” she recalled. “My Rotary [International] host family, Tom and Carole French, and their four children were so open and welcoming to me. They had two boys who were older and two girls, one older and one younger. We really became close…. I was the happiest child. I loved being there,” Faudon-Waldner said, noting that she traveled with the family to Hawaii and their youngest daughter came to visit her in her hometown of Graz.

Once back in Austria, Faudon-Waldner studied art history at Karl Franzens University in Graz, earning a master’s in 1997 and a Ph.D. in 2002. “I have always been interested in art and my family supported that. Visual and performing arts are an essential part of our society and lives. It is important to support the arts sufficiently through state subsidies and private donations,” she told us.

After college, she worked in the private sector in public relations and as a conference and exhibition organizer in Graz and Vienna. In 2004, she was hired by the City Parliament of Vienna as a public relations consultant and for the Cultural Committee and the Women’s Affairs Committee.

Since 2005, she has been employed by the Austrian Parliamentary Administration, from which she is now on a leave of absence. She worked in the office of the President of the National Council (one of two houses in Parliament) as well as the body’s Department of Digital Media and Corporate Design. From 2013 to 2015, she was head of the Communications Department.

Faudon-Waldner and her husband both had previous marriages. “In 2002, we met in Vienna at an evening meeting. We didn’t know each other. We were so busy we didn’t see each other for another two years. In 2004, we saw each other again, this time at a party, and we started dating … but we didn’t marry until 2013. We lived together but weren’t thinking about marriage. When you’ve been through a marriage and a divorce, you are more cautious,” she said.

The ambassador has two daughters who are in their 20s. Valentina, called Tina, is 24 and Antonia, or Toni, is 26. Both are in Austria but visit often. 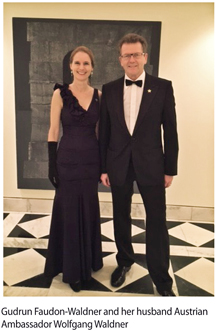 The ambassador was posted here in D.C. from 1983 to 1986 as cultural attaché when the embassy was on Massachusetts Avenue, where the Croatian Embassy is today. His way of comparing Washington of the 1980s to the Washington of today is simple, according to his wife: “He says that then you couldn’t find dark bread anywhere and now there are many more museums and restaurants of different cuisines,” she said.

More museums are just what this culturally savvy Austrian couple thrive on. In addition to serving as state secretary for European and international affairs and ambassador to Hungary, Waldner served two postings in the U.S. as director of the Austrian Cultural Forum in Washington and New York. He was also head of Vienna’s MuseumsQuartier, a district in the city with museums and cultural institutions. Most recently, he served as director-general for cultural policy at the Foreign Ministry in Vienna.

Faudon-Waldner said Washington, her first overseas posting, offers “a vivid life for the spouses of ambassadors.”

“Many spouses of ambassadors had been employed or worked in their own professions and interrupted their careers to be with their spouse. This is often an issue for diplomatic families and sometimes spouses won’t automatically join their partners but commute between two countries within Europe to not be forced to quit their jobs.”

Faudon-Waldner did just that when the ambassador was posted to Hungary and she stayed in Austria. “I commuted between Vienna and Budapest each weekend. It’s only a two-and-a-half-hour drive. For you Americans, you’d drive that to work every day.

“At the beginning of our term in D.C., I missed the structure of a work day. I missed my colleagues and it took me quite some time to find a new rhythm,” she admitted. “I had been in an employment work mode since I graduated from university and had a very similar daily routine. This changed a lot. Now we have guests at home or we are invited out every other evening. During the day, I have a rather flexible schedule, which does not mean that you get the day off. D.C. is a very busy city.”

It is also a very international city, she says. “This fact makes it easier for diplomats to adjust. Also, you can be very European, if you like. For example, spouses of the EU ambassadors meet on a regular basis. Every month a different country hosts a meeting. I like that a lot and enjoy the European company.

“Like other diplomatic spouses, I am a member of the International Neighbors Club 1,” Faudon-Waldner continued. “We have interesting programs and it is fun visiting together. This club is very well organized and I enjoy the company of many different members, not only from the diplomatic corps but government, Congress, education, media and the arts.” 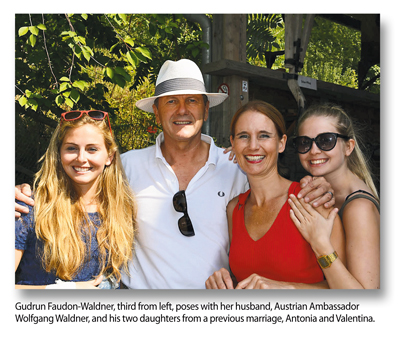 Among the other attributes she enjoys about D.C. beyond its museums and cosmopolitan atmosphere are Rock Creek Park, the Potomac River, good infrastructure and bountiful restaurants, particularly Restaurant Nora, America’s first certified organic restaurant and the brainchild of Austrian Nora Pouillon.

At the same time, Faudon-Waldner said it’s important to go beyond the Beltway. “We live in a bubble here. Traveling is always an eye-opener. We feel like we want to experience more. We took a cross-country trip up the Mississippi. We drove the scenic road where the speed limit is about 35 miles per hour. We went up to the Great Lakes and stayed overnight. No Chicago — just small ports and art galleries and small hotels. When we want to go to big American cities, we fly in, stay a couple of days and fly out,” she said.

As much as Faudon-Waldner loves the U.S., there’s no place like home. This summer, the couple will take a long holiday in Austria and visit other parts of Europe.

Faudon-Waldner proudly pointed out that Vienna “just took first place again for overall quality of living among 231 cities around the world for the eighth consecutive year, according to Mercer’s 19th annual Quality of Living survey. Vienna gets top marks for security, medical care, education, water supply, recreational offerings and availability of all kinds of consumer goods. All this together makes the Austrian capital the most livable of all.”

Beyond family, friends and all the perks that Austrian living has to offer, Faudon-Waldner said she also misses the little things — namely Austrian herbal tea and, of course, its chocolate. Here, she buys Swiss-made Lindt chocolate but it’s not quite the same.

“We have a bigger variety of different kinds of chocolates. I eat a lot of chocolate! It’s good for your nerves.”