In an era when consumers are hyper-sensitive about where the products they buy come from — whether it’s fair trade coffee or a locally grown tomato — it should be little surprise that jewelers are going out of their way to advertise their ethically sourced baubles.

Brilliant Earth, a San Francisco-based jewelry store with five locations, opened its sixth showroom at 3332 Cady’s Alley, NW, in Georgetown last month. The store sells ethically produced jewelry that does not “come at a high human or environmental cost,” according to its mission statement.

“Many consumers today are more interested in understanding where their purchases come from and the practices behind them,” Kathryn Edison Money, Brilliant Earth’s vice president of strategy and merchandising, said in an email. “We’ve found this is especially true for a purchase as significant as a diamond ring.”

But the $80 billion-a-year diamond trade is wrought with controversy. About 65 percent of diamonds are mined in Africa, where warlords and rebels in countries such as Angola, Côte d’Ivoire, the Democratic Republic of Congo, Liberia and Sierra Leone have used profits to fund bloody wars.

To assure customers that their jewelry did not have unethical origins, most jewelers adhere to the Kimberley Process (KP), an international initiative that became operational in 2003 to increase transparency and oversight in the diamond industry. Its goal is to eliminate trade in conflict diamonds, or rough diamonds that rebel groups and their allies sell to fund fights against legitimate governments, according to the State Department. As of 2013, KP members accounted for about 99.8 percent of the global production of rough diamonds, according to the KP website. 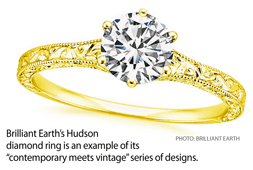 But the diamond trade remains deeply flawed. Tracing the path of diamonds through an often murky network of illegal smuggling, money laundering, government corruption, corporate complicity and consumer unawareness is a monumental task. Diamonds continue to fund abuses in Zimbabwe and the Central African Republic, for instance, and human rights groups such as Amnesty International and Global Witness say the industry hides behind Kimberley certificates to avoid the tough work of ensuring that conflict diamonds stay out of the supply chain. Moreover, the Kimberley Process applies only to rough diamonds — not stones that are cut and polished.

KP is limited in scope, Money said. “What this definition leaves out is large numbers of diamonds that are tainted by violence, human rights abuses, poverty and environmental degradation,” she said. “We go beyond the usual standard to offer diamonds that originate from ethical and environmentally responsible sources. Our diamonds are traceable to their origins and demonstrate a robust chain of custody.”

To that end, Brilliant Earth offers “beyond conflict-free” natural diamonds that originate from mines in places like Canada and Russia that follow strict labor, trade and environmental standards, Money said. Additionally, the company sells Botswana Sort diamonds, about 75 percent of which were mined in Botswana, while the remainder come from Namibia and South Africa but are brought to Botswana for sorting and sale, according to Brilliant Earth.

“We also offer lab-created and recycled diamonds, both of which are eco-friendly choices,” Money added.

Beyond diamonds, the store also sells pearls and colored gemstones that are sourced from places that follow fair trade and green principles. For example, most of the store’s sapphires come from Sri Lanka, where miners use techniques that minimize environmental effects, Money said.

What’s more, the store handcrafts its fine jewelry from recycled precious metals. “Metal mining, and gold mining in particular, is one of the most environmentally destructive types of mining, and many gold miners earn low wages in dangerous working conditions,” Money said. “Our objective is to help diminish the negative impacts of dirty gold by reducing the demand for newly mined metals.”

Additionally, the store works with several nonprofit organizations working to better communities that serve the jewelry industry — because the riches dug up in these communities rarely go to improve the lives of miners and their families. The Democratic Republic of the Congo, for instance, has a wealth of mineral resources but is one of the poorest, least-educated countries in Africa. Brilliant Earth partnered with the Diamond Development Initiative to help fund its Brilliant Mobile School for 7- to 14-year-olds in Lungudi, a diamond mining community in the Congo. Recently, the store also partnered with Pure Earth, a New York-based nonprofit focused on pollution in low- and middle-income countries, to teach artisanal gold miners in Peru a mercury-free mining technique.

The “educated and socially conscious community” in Washington made it the right fit for its new store, Money said. Shoppers can make an appointment to visit the 2,500-square-foot store, which sells engagement, wedding and vintage rings, and fine jewelry. Bestsellers include the Willow Diamond Ring, a Brilliant Earth design that has intertwined vines; the simple Lissome and Waverly diamond rings; and halo diamond rings such as the Cadenza and Alvadora, which have vintage-inspired latticework.

Brilliant Earth joins other ethically minded jewelers in this area. Matt Rosenheim, president of the 85-year-old Tiny Jewel Box, said the most common way he addresses concerns about diamonds’ origins is by using certified Canadian stones. 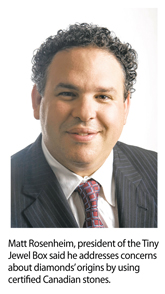 He’d know because he sits on the board of the Jewelers of America, a 111-year-old trade association that in 2005 helped found the Responsible Jewellery Council, a London-based nonprofit with more than 900 member companies. They commit to a code of practices that addresses human and labor rights, the environment, mining practices and product disclosure.

“In Washington, we do get inquiries about this maybe more than other markets just because the education level is very high,” said Rosenheim, who has sold to presidents, first ladies, ambassadors, members of Congress and foreign dignitaries. “We have really smart, educated people who are aware of the broader world around them. I think that we get inquiries pretty regularly, and I really enjoy having that dialogue with customers myself and helping to educate customers and making sure that they feel comfortable.”

At Mazza Gallerie’s Pampillonia, owner Dino Pampillonia said his store was one of the first in the country to have a policy on ethically sourced jewelry, an accomplishment that was recognized in 2004 by Global Witness, a nonprofit that exposes links between environmental and human rights abuses and political and economic corruption.

Pampillonia sells estate, vintage and handmade pieces. For the latter, he buys only “harmony,” or recycled, metals, which cost the same per ounce as the freshly mined stuff.

“Once a metal has been taken out of the ground, you can’t tell how it was taken out of the ground, but all the gold and platinum we use comes from a company that only sells recyclable metals, so they’re all harmony metals,” Pampillonia explained. “On the diamond front, the vast majority of the larger diamonds that we use in our jewelry — and this would be something over half a carat and larger — again, are recycled because being estate and vintage jewelers, we buy jewelry from the public and we recut a lot of diamonds to today’s proper proportions and then carry them.”

When he buys diamonds from suppliers, they have statements on file that they comply with KP. “It’s very easy to avoid” stones with problematic histories, he said. “There’s plenty of diamonds.”

His bestsellers are typically engagement rings, although Pampillonia has noticed a trend away from platinum and toward pink and yellow gold. “I do see definitely a trend into previously owned, signed jewelry — previously owned jewelry from internationally well-known designers,” added Pampillonia, whose family has been in the jewelry business for six generations, even serving as jeweler to an Italian king.

But overall, D.C. tastes tend to be simple, he said. “Washington is still very conservative. It’s just not a flashy city. If anything, I think people are taking a little bit more fashion risk when it comes to color, so more color gemstones and not all white diamonds, but this is still not glitzy as Miami or Dallas or Los Angeles would be.” 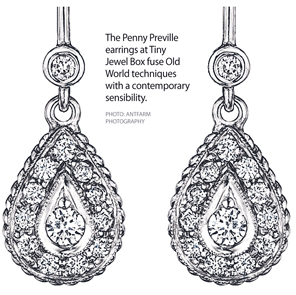 In addition to the Kimberley Process, many other policies and organizations have been established to prevent conflict diamonds from entering the supply chain. They include the World Diamond Council’s System of Warranties, which extends KP to polished diamonds; CIBJO, otherwise known as the World Jewellery Confederation, an international alliance of national jewelry trade organizations that promotes consumer confidence in the industry; Peace Diamond Alliance, which targets miners and traders from Sierra Leone’s Kono region; and Mwadui Community Diamond Partnership, which is working to change the artisanal diamond industry in Tanzania.

Still, problems persist. A landmark 1998 report by Global Witness titled “A Rough Trade” put the spotlight on diamonds’ role in funding the war in Angola. Today, the organization says, diamonds are one of the driving forces financing rival groups in the Central African Republic, which is “in the midst of one of the world’s largest humanitarian crises. More than two million people are in need of humanitarian assistance and nearly a fifth of the population is displaced.”

In Zimbabwe, the army’s violent takeover of the Marange diamond field in 2008 led to links between the mining companies and the military and secret police, according to Global Witness. “The involvement in the diamond sector of security forces loyal to the ZANU-PF ruling party, particularly around the 2008 and 2013 elections, raised concerns of off-budget diamond revenues being used to finance human rights abuses and vote-rigging,” the report states. Still, KP does not ban exports from Marange, it adds.

“Unfortunately, and unbeknownst to well-meaning consumers, ‘conflict-free’ diamonds are still sometimes … rife with unethical and environmentally unsound practices,” according to a blog post by Michael Fried, head diamond expert at Swiss-based The Diamond Pro, who noted that consumers buy dubiously sourced diamonds potentially 14 percent to 20 percent of the time. To avoid problems, he recommends purchasing Canadian, lab-created or recycled diamonds. 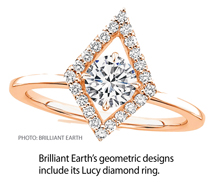 Rosenheim of the Tiny Jewel Box, which has recently had success with its new line of in-house designed and manufactured bridal jewelry, said different buyers want different levels of assurance about their diamonds. For some, KP is enough, while others have more stringent requirements. He recommends visiting the Jewelers of America website to research the issues and options.

Pampillonia said shoppers should ask to see a store’s policy on conflict diamonds and discuss where it gets its metals, but Brilliant Earth’s Money takes it a step further, suggesting that consumers also ask about the labor and environmental conditions in the locations where the store’s diamonds come from.

The consulting firm Bain & Company predicts a long-term growth trajectory for rough diamonds and a positive macroeconomic outlook for polished ones, meaning the issue of ethically sourced diamonds is likely to be front and center for the foreseeable future.