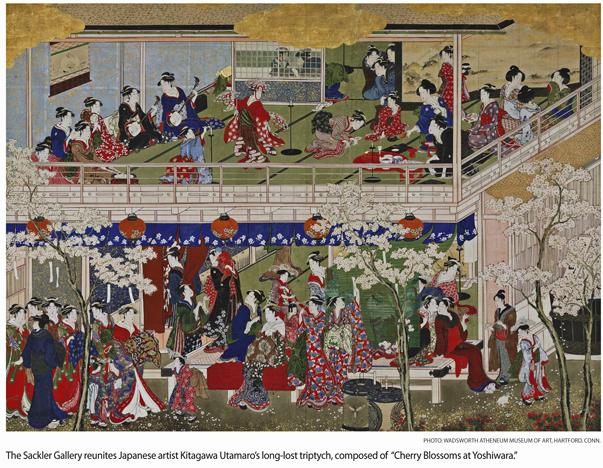 The Sackler Gallery is hosting a long-awaited reunion for Japanese art lovers. “Inventing Utamaro: A Japanese Masterpiece Rediscovered” brings together a seminal triptych by legendary Japanese artist Kitagawa Utamaro that hasn’t been seen in its entirety since 1879.

“Fukagawa in the Snow,” “Moon at Shinagawa” and “Cherry Blossoms at Yoshiwara” were quickly separated and sold off once they reached the Paris art market in the 1880s, leaving an air of mystery behind them.

Utamaro himself (1753-1806) was a bit of an enigma. He was highly regarded for his ukiyo-e woodblock prints and paintings, particularly of beautiful women and idealized depictions of pleasure districts in Edo (modern-day Tokyo). He produced over 2,000 known prints and became one of the few recognized pioneers of the ukiyo-e genre. His work spread to Europe in the mid-19th century and influenced the continent’s impressionists such as Mary Cassatt, but otherwise little is known about the artist’s life.

Utamaro’s large-scale ensemble portraying snow, moon and flowers was snatched up shortly after the triptych appeared in Paris. Charles Lang Freer — an American industrialist whose expansive Asian art collection established the Freer and Sackler galleries — bought “Moon at Shinagawa” in 1903.

Freer wrote to art dealer Siegfried Bing about the monumental size of the Utamaro painting he had purchased, saying he was glad to have acquired it even though it was a very “difficult” piece to handle.

“Cherry Blossoms at Yoshiwara” was passed throughout France until the late 1950s, when the Wadsworth Atheneum Museum of Art in Connecticut bought it. “Fukagawa in the Snow” hadn’t turned up for 70 years until it suddenly reappeared in Hakone, Japan. 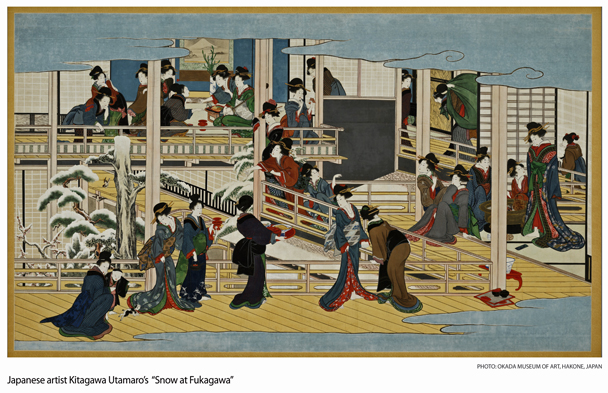 The rediscovery of the massive painting, featuring over two dozen stylized figures, electrified the art world. When “Fukagawa in the Snow” turned up and was purchased by the Okada Museum of Art, James Ulak, senior curator of Japanese art at the Freer and Sackler, said the vibe was: “We have to do something!”

“When the discovery was announced, we were having crossed emails and phone calls because we all wanted to speak with each other right away,” he said.

Ulak’s outreach worked and now all three original pieces are on display at the Sackler until July 9. The exhibit explores the paintings within the context of Japonisme (the influence of Japanese art on Western art), as European and American collectors discovered the work of Utamaro and, by extension, ukiyo-e, at the turn of the 20th century. The immense scale of the paintings is also unique by ukiyo-e standards, whose block prints and illustrated books tended to be smaller in size.

The ukiyo-e movement, which literally means pictures of the “floating world,” was known for its depictions of women, kabuki actors, sumo wrestlers, folk tales, landscapes, flora, fauna and erotic scenes. Utamaro distinguished himself from other ukiyo-e artists with his sensuous, almost reverential portraits of female beauties in Edo’s pleasure quarters, which were known as leisurely escapes from the pressures of the everyday world. His use of light, shade and proportion brought out subtle differences among his female subjects, capturing their individual personalities, mood, class, age and circumstances. He was one of the few ukiyo-e artists to earn national acclaim, with admirers in both Japan and Europe. 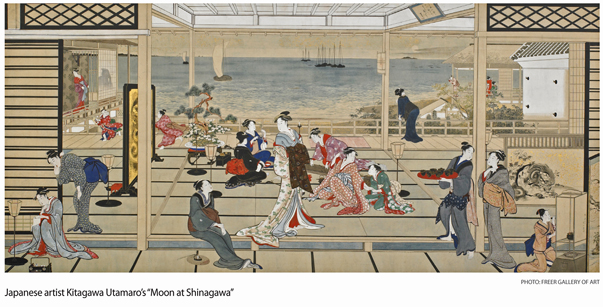 Ulak recalled seeing Utamaro’s three paintings together for the first time. Calling it big, bold and unlike anything anyone has ever seen, Ulak praised the extreme rarity of the artistic reunion. “I walked away with a feeling of great discovery,” he said. “Seeing them all lined up, it was jarring — immediately seeing the color and beauty that hits the eye.”

The show is an excellent case study of an era when modern nations were just beginning to interact globally on affairs of commerce and state, according to Ulak. “You could say this is how Western countries got a larger impression of Japan, and they will also see how important a role international expositions played in positioning Japan,” he said.

Ulak said the exhibit exudes beauty, mystery and revelation. It’s also a symbol of how art and diplomacy can work together.

The Freer and Sackler galleries are planning an even bigger revelation later this fall. The Freer has been undergoing major renovations over the last year, but Ulak said it is scheduled to make a grand reopening in mid-October with plenty of fanfare.