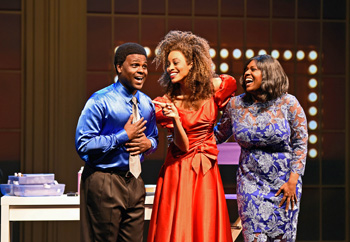 “Born for This: The BeBe Winans Story,” about prodigy siblings BeBe and sister CeCe, is a melodious delight and rousing crowd-pleaser. But it’s not without its highlights and low points, similar to BeBe’s career path as a gospel and R&B singing legend.

At left, Juan Winans as BeBe Winans, Kiandra Richardson as Whitney Houston and Deborah Joy Winans as CeCe Winans star in “Born for This,” the story of the popular sibling soul performers from Detroit.

The musical, currently at Arena Stage, chronicles the real life of BeBe (Benjamin) and CeCe (Priscilla) Winans, who come from the noted Winans clan from Detroit, most of whom are also gospel artists.

During this coming-of-age tale, we witness BeBe ache with jealousy over his brothers’ gospel quartet, watch him envy CeCe as she makes it through an important audition and see him struggle to eventually become an award-winning solo artist by combining contemporary R&B with gospel fervor.

In keeping with the Winans’ tradition of keeping a tight-knit family, BeBe and CeCe are played by their real-life niece and nephew, siblings Juan Winans and Deborah Joy Winans.

The play features mostly original songs by BeBe, who shares the script credit with director Charles Randolph-Wright, the director behind “Motown the Musical.”

That BeBe wanted to keep the family talent legacy alive by writing his own play and casting the lead roles with his family’s next generation of crooning geniuses is understandable. But choosing to tell the family story by using his own lineage was a risk, as the acting and storyline are uneven.

Aside from his soulful crooning, the main character, Juan Winans, as an actor, lacks the intensity of the real-life BeBe and shuffles his way through the script as a frustrated, put-upon teen persona who doesn’t grow with the character’s rise to fame. Deborah Winans, who has a powerful singing voice, is somewhat more believable as CeCe, demonstrating a journey from young, naïve teen to happy bride and reluctant superstar. But her superior acting only serves to highlight Juan’s inadequacies. 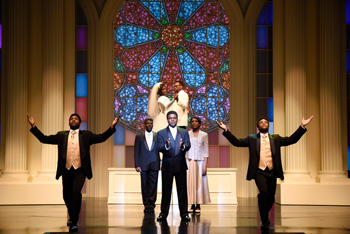 A definite surprise of the play reveals a little-known fact that BeBe and CeCe got their start with none other than the eclectic evangelists Jim and Tammy Faye Bakker in Pineville, S.C. There they spent six years of their late teens and early 20s as part of the couple’s religious TV network, PTL (Praise the Lord).

In fact, the play’s momentum lags a bit until the appearance of Kirsten Wyatt, who portrays Tammy Faye. Known for her crying fits and over-the-top makeup, Tammy Faye was a household name in the 1980s and an iconic figure worth revisiting. In parodying Tammy Faye’s eccentric mannerisms and matching her diminutive yet forceful presence, Wyatt shows a different side of Tammy Faye that her TV viewing audience missed out on.

Although, as the play illustrates, the Bakkers’ motives for signing the Winans duo was to nab profitable ratings (as depicted in the shameless song “Two Golden Eggs”), Tammy Faye made a point of protecting BeBe and CeCe against the overt racism they received for being on a white, Southern, Christian network — a mere couple of decades after the Civil Rights Act. Instead of only playing the caricature so many portrayed during her husband’s sex and financial scandal, Wyatt conducts the part with a great deal of spot-on humor and enough righteous piss and vinegar that gives Tammy Faye the respect she deserved. Unfortunately, this comes a decade after she passed away and her husband rose to reclaim his TV ministry.

However, due to Wyatt’s strong performance and an undue amount of script time devoted to the Bakkers, the PTL portion of the play tends to overshadow the Winans’ trajectory. 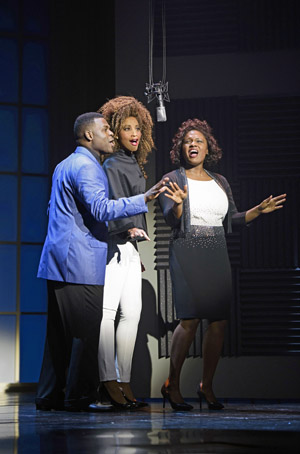 We do get a glimpse of BeBe and CeCe’s wonderful musical pairing with Whitney Houston, portrayed by look-alike and talented Kianda Richardson. With that, we’re treated to their inspiring rendition of “Hold Up the Light.”

We miss a lot of BeBe’s accomplishments in later life, and it would have been nice to hear some of the songs that made him famous, like the singles “Lift Every Voice and Sing,” “Heaven” and “In Harm’s Way.”

Even with its occasional blemishes, “Born for This” truly reminded us that there is no question that BeBe (and CeCe) found their true calling and share a musical gift. It was enjoyable to go along for the ride.

Born for This: The BeBe Winans Story